This beautiful parrot breed comes from the south pacific region.

In the scientific literature, sometimes 9 and sometimes 10 subspecies belonging to this group are counted, depending on the author. As a result of the export of these parrots to foreign countries, unfortunately, some producers have mated subspecies within themselves and produced hybrids.

Eclectus between 29 cm – 40 cm with short tail, strong body structure and approximate weight of 450 gr. found parrots. Since their distance is around 70 cm when they open their wings, the inner areas they shelter must be wide.

They enter the adulthood period (pairing period) when they reach approximately 3years of age. 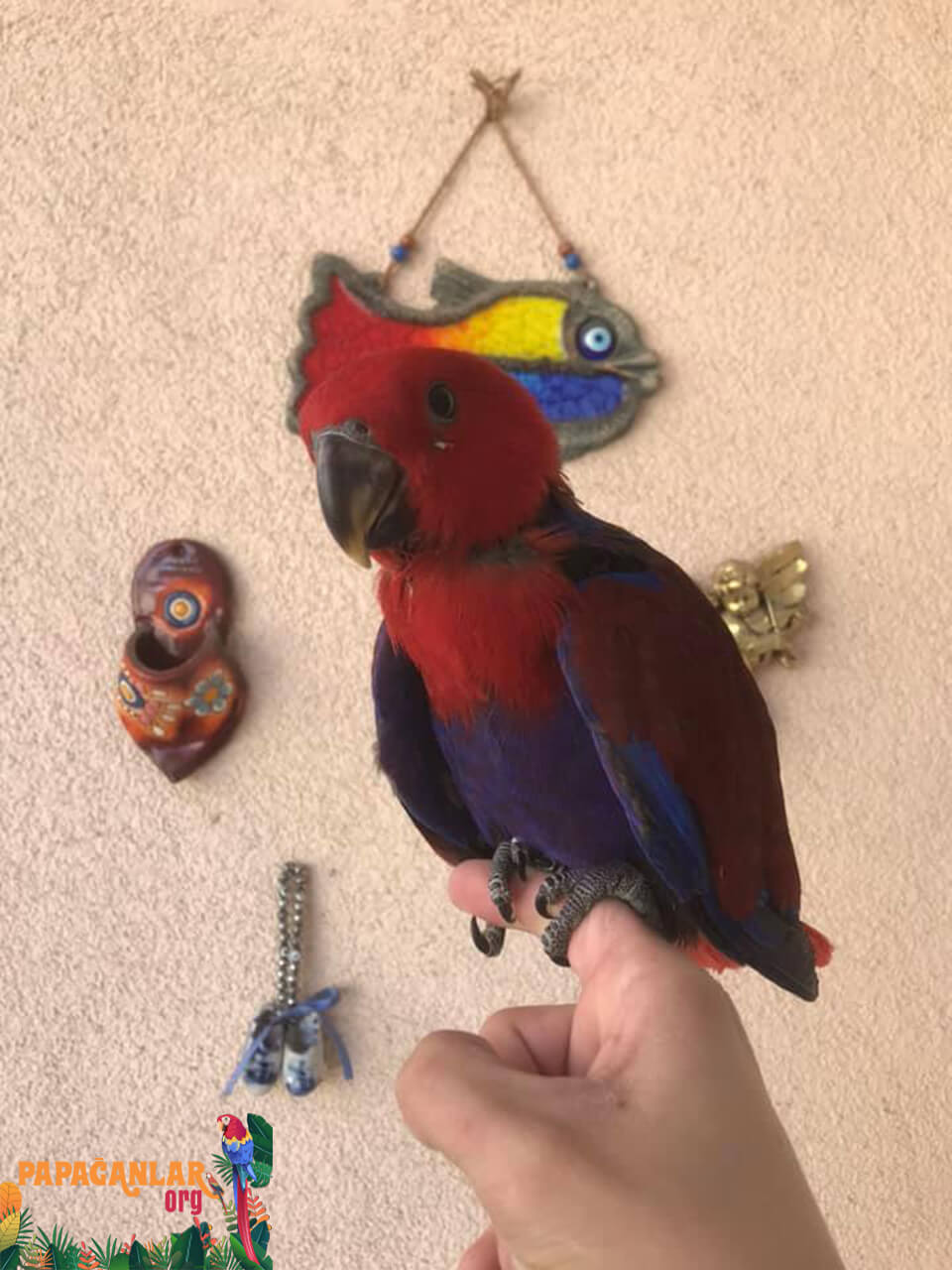 It took a long time for researchers to discover that the male and female of Eclectus parrots are two different genera belonging to the same species. In this species, the colors vary with very slight differences between the main species and subspecies. On the other hand, there are color differences between male and female parrots (Dimorphismus, Sexualdimorphismus), which will often lead to perceptions as two different species. While the main color in females is in very dark, eye-catching red tones, it changes in the main color tones of male birds. Their beaks are strong. The upper part is orange-red, the tip is yellow-yellow, and the lower beak is black. Eye colors (depending on the species) are also red, orange-red or brown-red. Unlike the male, the beak color of the female birds is black and the eye color is usually close to white – yellowish tones.

The most distinctive feature of the Eclectus parrot feather structure is that it resembles the hair structure we have, and for this reason, it is the only one among all parrots. 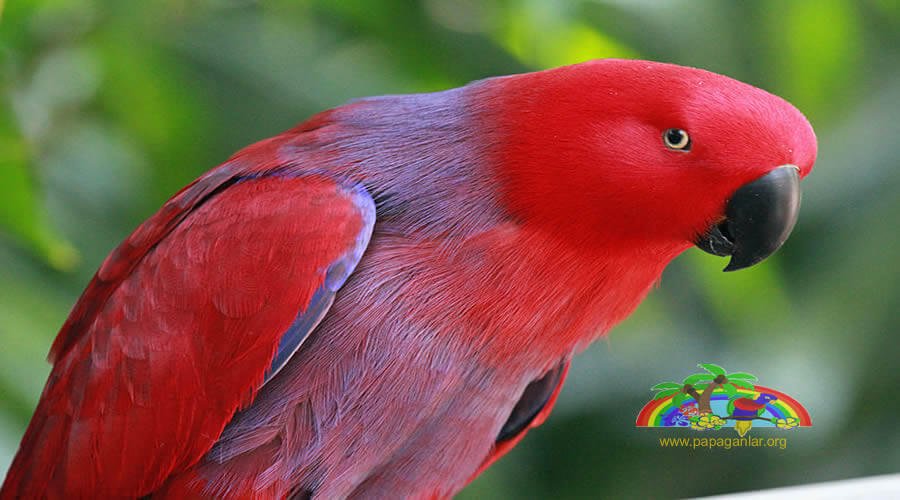 The female birds are more dominant in owning the habitat, which is estimated as a result of the researches, and they are not very sympathetic to the male bird outside the mating period.

Another difference of Eclectus compared to other parrots is that they have oil glands instead of dust glands in their feather structure. In Eclectus, there is no white powder, dandruff, which is known in other parrots. Eclectus shine their feathers during cleaning with these oil glands. This makes them look bright and lively.

Its natural habitats are the rainforests of the north-east of Australia, Salamon, Moluken, and neighboring islands, as well as New Guinea. It lives in the Capeyork region of Australia with a small population. 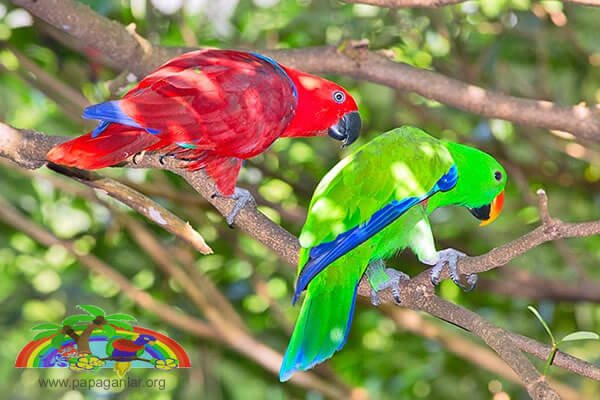 The natural habitats of the species can be listed as follows:

They originate from the central and southern parts of the Moluken region, more precisely from the islands of Buru and Ceram. It is the western part of New Guinea. They were brought to Gorong Island later. Representatives of this species no longer exist on the islands of Saparua and Haruku. It is extinct.

This subspecies originated in New Guinea. Waigeo is the islands of western Papua, including the islands of Batanta, Salawatis, and Misoos. Islands and Kai near the coast. They were later brought to the small islands in the Koror and Pacific (Palau) group.

Its origin comes from the islands of geelving bay (numfor, biag, yapen and mios num).

Its origin comes from the island of sunba, one of the small sunda islands in India.

Its origin is Australia, in the northern and eastern part of the Cape York peninsula.

Its origin is the island of tanimbar in India.

In the center of Moluken and on the islands to its north. In India and also in the islands of halmahera, moratai, batjan, obi, vessel, mareve kayao. In the islands of Ternate un tidore, this species is considered extinct.

Their origins are unfortunately unknown.

Unfortunately, the issues related to this subspecies have not been clarified yet. There are 11 museum specimens (6 female and 5 male birds) that are said to belong to this species. These samples were taken from those already in captivity. Its original origins could not be determined. Judging by their small size and coloration, some research authors have estimated, that these are hybrids that are more of two subspecies mating than one subspecies. 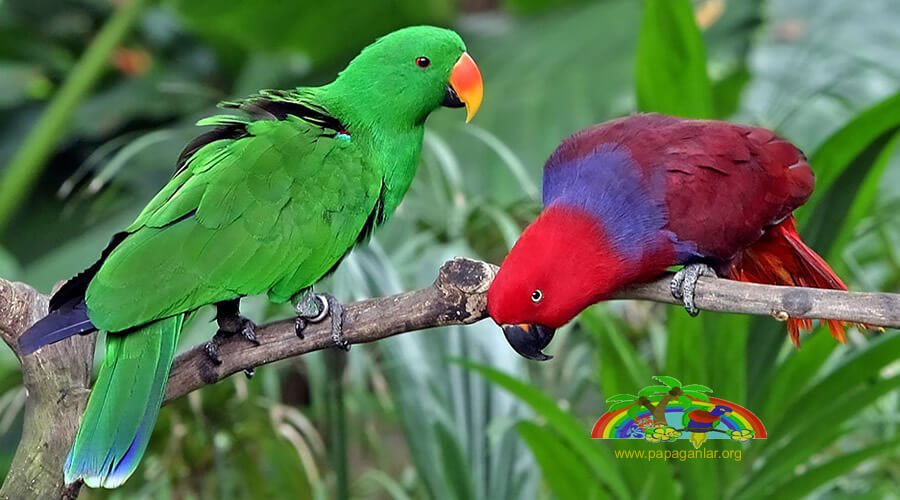 Except for the breeding season, they generally live singly or in small family groups. It is usually very rare to see them in a large herd. 30 birds in New Ireland and 80 birds in Australia, where they sometimes forage and sleep, have been seen together thanks to their striking calls. Their voices are harsh and squeaky. A tone called “Krraatch – krraak” is repeated 3 or 4 times. They also make a 2-syllable “tschu-wi-tschu-wi” sound while feeding. Male birds, on the other hand, have a unique call like “tschii-ong”. Already, identifying and recognizing them has been easy thanks to these remarkable calls.

While mostly flying in pairs, males are seen sitting alone on tree branches left in the clearing and calling out to their fellows.

The females, on the other hand, sit in silence, mostly in the interior of the wooded area. It is more difficult to spot them because of their red-blue hues. Their color gives them ideal concealment in interior wooded areas. 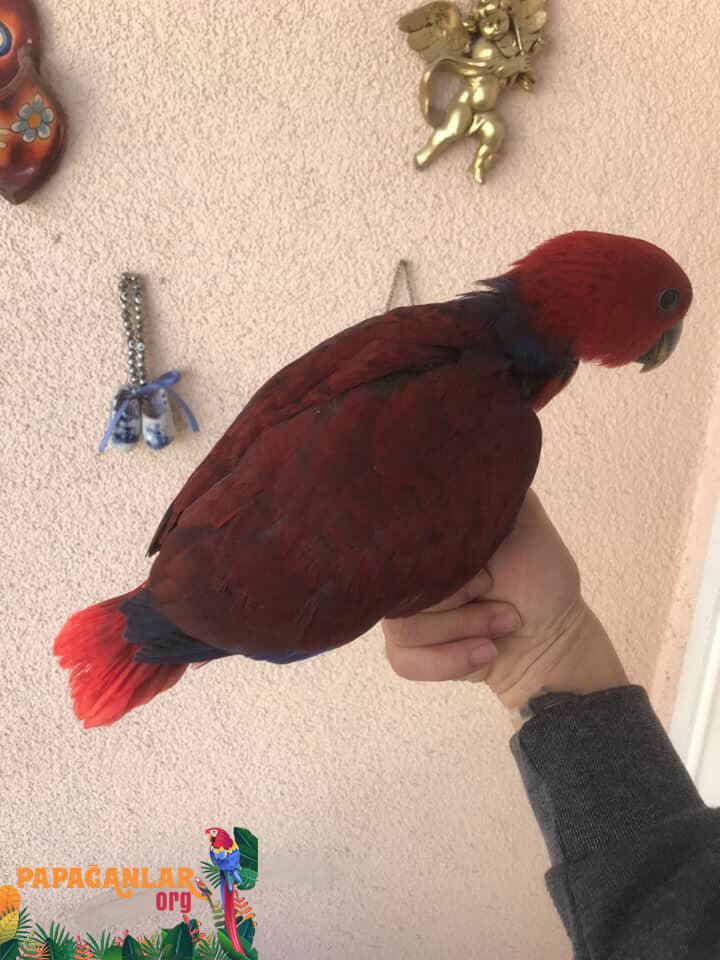 Spouses sit on different branches, usually a few meters apart. Sometimes they even stand on other trees. In pairs or in small groups, they leave their main sleeping (areas) trees and fly into the forest palm areas in search of forage in the early hours of the morning. They are timid but alert, watchful birds.

When they are frightened, they flee by shouting and making a tour over the area they are about to leave. They usually return to their main sleeping (shelter) areas (trees) around 16.00 or 18.00.

They first greet the newcomers to the group with different tones.

Their flight is strong but slow. They are known for their frequent flapping and leaping in between. Their flight to the feeding grounds is over the treetops. In palm groves and open areas, it is mostly low and 1 -2 meters above the ground. Females often fly behind males.

Nutritional Patterns in Their Natural Environments

END_OF_DOCUMENT_TOKEN_TO_BE_REPLACED

Green Parrots Inhabited Istanbul! Green parrots, which were seen in only a few parks in previous years, are now seen in almost all par...

END_OF_DOCUMENT_TOKEN_TO_BE_REPLACED

Eclectus(Eklectus) Parrot Pet Care Before you decide to buy an Eclectus parrot, the first thing you should do is get advice from experi...