Southeast Venezuela, border region of Guyana, French Guayana; Suriname, Brazil, the regions north of the Amazons to Colombia are the border regions of Ecuador and Peru.

Eastern Brazil and Southern Regions of the Amazon.

They inhabit the bright deep rainforest areas of the Amazon region. It is very rare to see them in 300 – 400 meters high areas. They prefer lower parts. Bright areas are the living areas with dense trees and palm areas. Sometimes they also choose semi-open wooded areas. However, it is possible to come across these birds mostly in areas close to water. Even if there is no acute danger as a species, as it has been detected in the last 10 years, 30% reductions in species development have started. The main reason for this decrease is in the amazon region, except for how many catches and sales; is the cutting of trees for timber.

It lives in social groups. These groups sometimes consist of 10 pairs and sometimes 20 pairs of birds.

They are not very good flyers due to their general anatomical structure. They are species that do not like to share the same area with other parrot species, especially their own species. 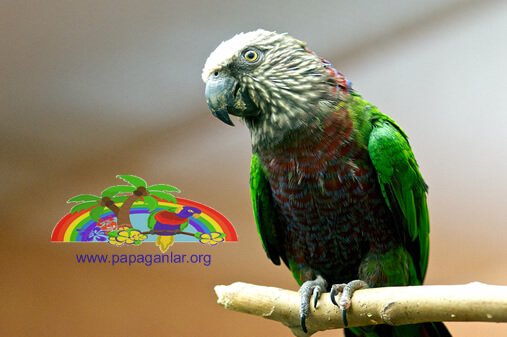 The fan parrot, which is considered to be from the main parrot family, is included in the New World parrot group as a subfamily. It is the only representative of its kind with 2 existing subspecies. Although some systemists consider them in the Amazons and Triclaria (Blue-Bellied Parrots) group, their exact kinship and racial similarities with other parrots have not been confirmed. The biggest feature that distinguishes them from the New World parrot family mentioned is the fan-shaped feathers that open on the neck when they are afraid, stressed, angry or nervous.

Upper and wing feathers are green in color. The wing tips are black. The upper part of the tail feathers, which is longer than the Amazons, is still green. The lower part is in a reddish-brown tone. Likewise, the chest feathers are also red and brown in color. It has a slight bluish reflection. The feathers on the legs are also green. The feathers on the upper head and forehead are whitish and grayish tones. Although the feathers on the side of the head appear brown in color, there are whitish lines inside. The hairless areas around the eyes are in brown, gray-brown tones. The fan hairs on the nape are also reddish brown and reflect a bluish tone. Its beak is dark brown – gray and its feet are brown – gray. The iris of the eye is yellowish in color. There is no identifiable color difference between male and female. But there is a distinguishing feature between the two existing species when viewed from the head. Deroptyus accipitrinus fuscifrons is also known as redhead. Because the color of the hair on the head of this species (including the nape and forehead) is dark red. It also has distinct white lines.

They are completely vegetarian species. The main elements of the diet are nuts, types of peanuts, seeds, leaves, buds, fruits and blackberries. The ones they like the most are especially palm fruits (the ones with high fat content like Inaja Tucuma’s). They meet their mineral needs by licking slime and clay. They go out in search of food only during the day and only in groups.

Mating and incubation periods in natural habitats occur between December and January. But this period extends to February, albeit rarely. They nest and lay eggs in dead tree cavities. The female stays alone during the incubation period, and the male goes to watch near the nest. This process also takes care of the feeding of the female. Females lay 2 to 4 eggs at a time in incubation. The incubation period is between 25 – 27 days. The offspring come out hairless and blind, and they are fed together from the parents for a long time. In about 9 weeks, they become feathered. But it takes about 70 – 80 days for them to leave the nest.

The life span of this species is considered to be 40 years in captivity, and longer in natural areas. 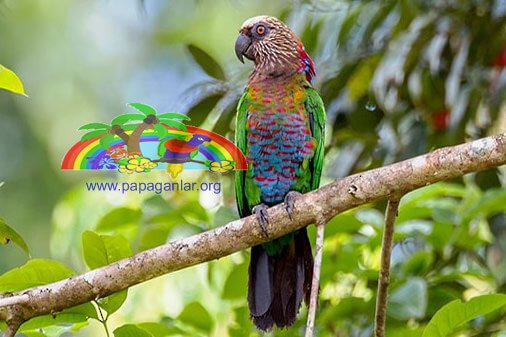 The most important thing you should know when you decide to look after this species is that you should not keep any other type of parrot at home. Because of their general nature, they do not like to live together with other parrots. In this sense, they are unsocialized species.

Since they are a species that likes water and frequent bathing, it is imperative that you provide regular bathing opportunities when you house them. Although not very loud, they still have a level of noise that disturbs the environment. They are always active and playful birds. They were caught illegally from the natural environment. Unfortunately, hair pulling and psychological disorders often occur at an incurable level. If you get the chance to get it from production, you will have a quick domesticated and easy learner species. However, the most important issue to be considered in particular is that they are aggressive during the mating period. During this period, if attention is not paid and they experience unnecessary discomfort, they become aggressive towards their owners, causing serious injuries.

Also, since they are species with a developed nibble instinct, these needs should be met regularly during the day.

They are not very suitable for cagelife and single feeding. It should be kept in pairs and wide keel cages, which are generally recommended. Especially you will make an outdoor keel (minimum number of birds) 3m x 1.5 m x 2 m; You should do it in size. You should do this by paying attention to the fact that the illegally caught ones are housed in such a way that the temperature does not fall below 25C. On the other hand, you have the chance to host the birds you buy from normal production in a way that does not fall below 15 C in external releases. But it is essential to have sleeping boxes inside the keel. If another bird species is to be found in the same keel, we never recommend it. However, if it is necessary, it is necessary to create a mechanism inside so that the birds cannot see each other. Otherwise Fan Parrots will have a lot of trouble.

END_OF_DOCUMENT_TOKEN_TO_BE_REPLACED

Eclectus(Eklectus) Parrot Pet Care Before you decide to buy an Eclectus parrot, the first thing you should do is get advice from exper...

END_OF_DOCUMENT_TOKEN_TO_BE_REPLACED

Parrot is a bird species living in warm places with bright feathers. The parrot is a good climbing bird. The known forms of parrots tod...

END_OF_DOCUMENT_TOKEN_TO_BE_REPLACED

Parrot Types and Breeds Parrot varieties are a type of bird with a curved bill, fleshy and thick tongue, bright feathers and living i...