Men are not responsible for the care of minor children. They are also the only parrots to practice polygamy and the mating system. Predominantly herbivorous, they eat native plants, seeds, fruits and pollen. 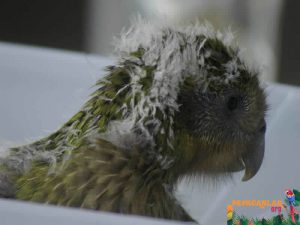 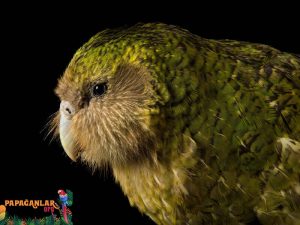 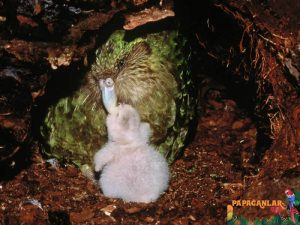 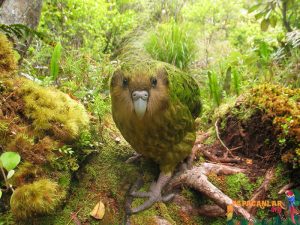 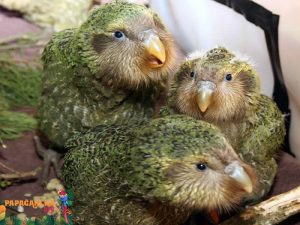 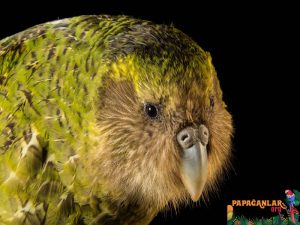 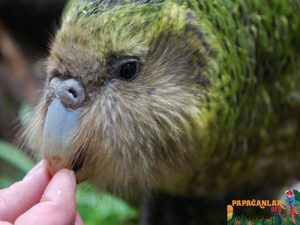 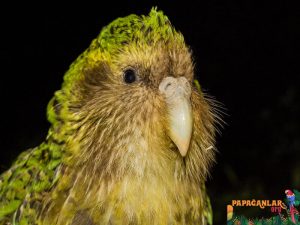 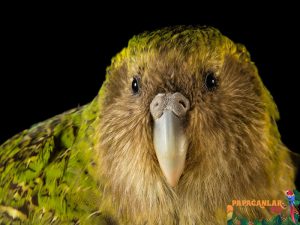 It is called a flightless, forest-dwelling parrot with a pale owl-like face. Kakapo is moss green mottled with yellow and black on top and similar but more yellow on the underside. His belly is gray; legs and feet are gray with pale soles. Kakapo has very low genetic diversity and, as a result, low fertility.

Kakapo parrot; Large round, it is 59-64 cm long and weighs 2-4 kg. It has a relatively short pair of wings and lacks the spinal bones that control the flight muscles of birds. Kakapo parrots cannot fly. Its wings are not sufficient to fly, they only serve as a general balance or provide a certain degree of support.

Unlike other birds, kakapo have a light body. They tend to store a lot of fat in their bodies, making it the highest weight of its kind.

The feathers on the Kakapo’s surface have various colors. In addition to the main color yellowish and moss-like green, the feathers have stripes from black to dark brown. This protective color allows them to hide under natural vegetation.

In fact, the colors, hues and mottled patterns of different individuals can be very different. Some of the examples in the museum collections are all yellow. Breast and both sides yellow-green, with yellow stripes, on the abdomen, tail, neck and under the face yellow still prominent, green stripes and a small amount of brown-gray mottling. Their feathers are very soft, as they do not have to deal with the necessary strength and stiffness during flight. 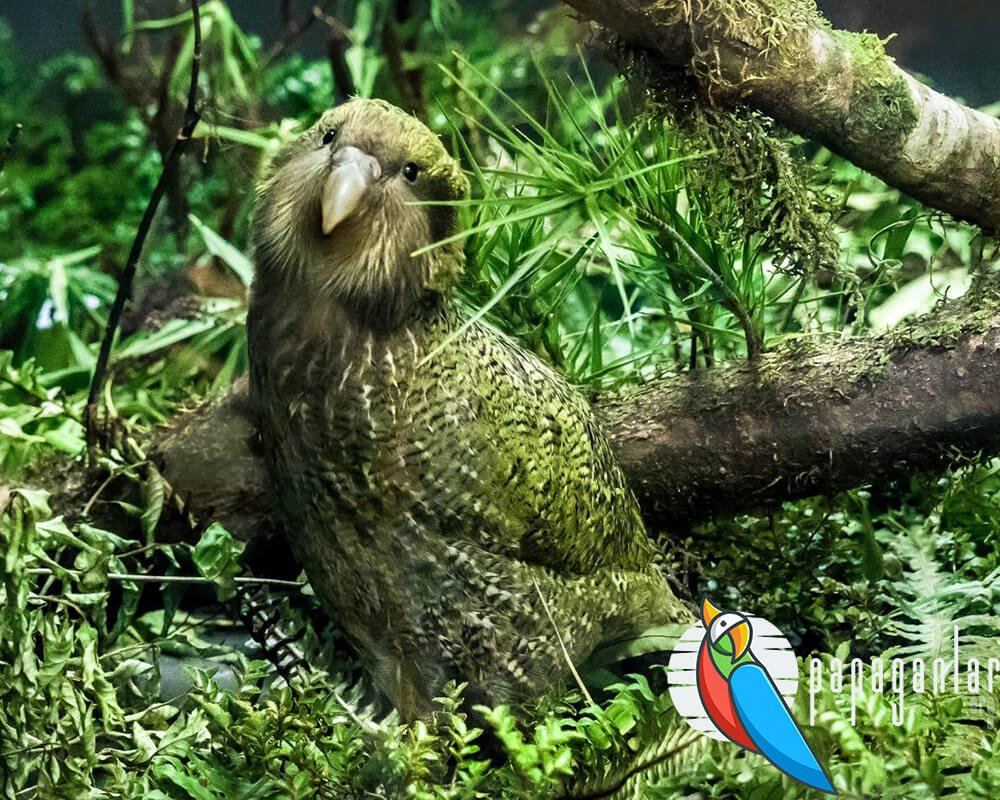 The adult kakapo is vulnerable to predation by cats and crows, and its eggs and chicks can be killed by mice. Females alone incubate eggs and raise chicks.

Eggs and chicks are particularly vulnerable to predators when the nest is unattended, as they must be away from the nest for extended periods of time.

Chick rearing takes longer and nests become smelly and easier for hunters to find. Away from their nests, the kakapo often freezes and relies on cryptic colors to hide them from predators.

While this strategy works well when the primary predators are sighted birds, avoiding mammalian predators that hunt by scent is a completely ineffective strategy. 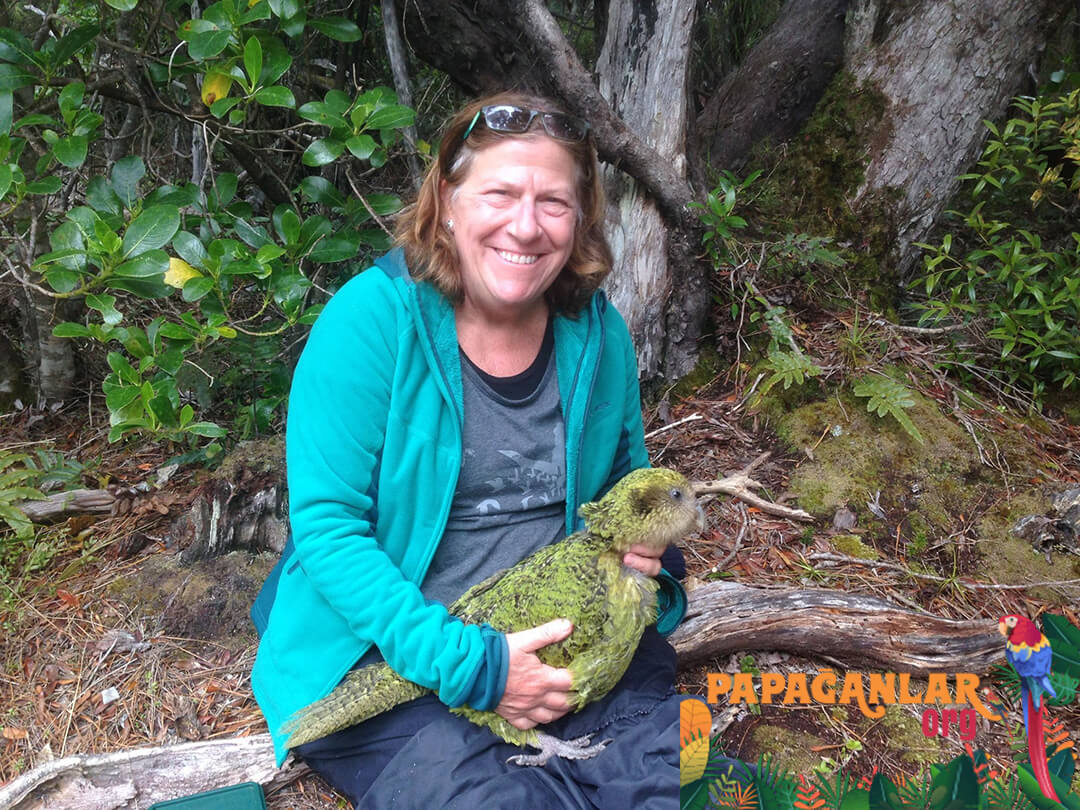 Kakapo breeds in summer and autumn, but only in years when fruit is plentiful. On islands in southern New Zealand, rimu trees reproduce every 2 to 4 years when they bear fruit.

Elsewhere in New Zealand, southern beeches likely nested when inseminated, although breeding triggers in some northern locations, including Hauturu, are unknown.

Kakapo are the only breeders. Males call from crawler systems to attract females to mate. Males play no role in brooding or raising chicks. Nests are underground or underground in natural cavities or under dense vegetation.

1-4 eggs are laid in a shallow depression in the soil or rotten wood, which are repeatedly turned before and during hatching.

You can get information about Kakapo parrot prices here.

Individuals who love bird species contribute to the animals as a parrot owner. Today, many parrot varieties are offered for sale in pet...