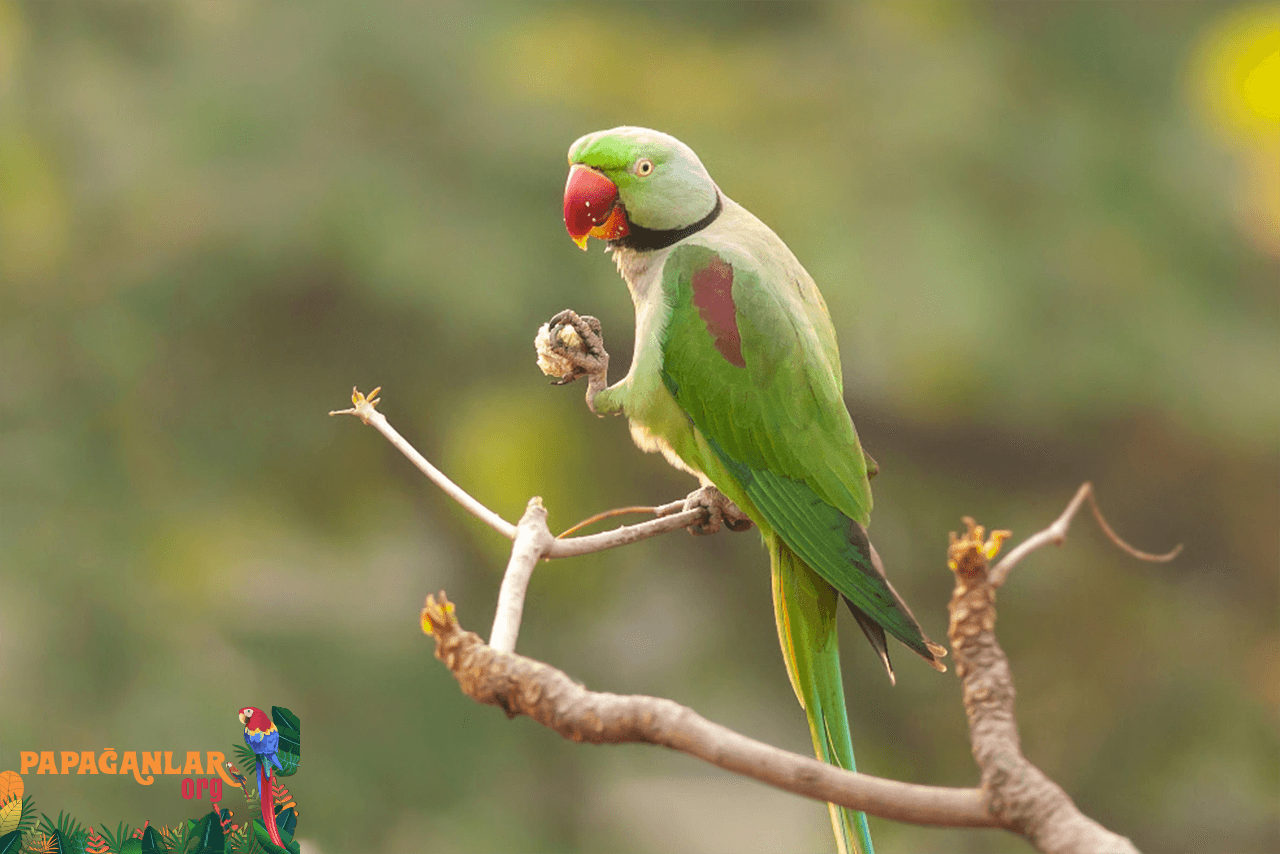 General Life and Characteristics of the Alexander Parrot

The Alexander Parrot has a size between 48 and 58 cm. The Alexander Parrot, which has a larger structure compared to its family, has a black band on the upper part of its neck. The parrot species, which also has a pinkish band on the back of its neck, has a reddish brown spot on its shoulder (top of its wings). The tail feathers of the Alexander Parrot, which can be blue and green, have a yellowish color towards the tip of the tail. The eyes of the parrot species, which are generally known for their red beak and are in the foreground, are dull yellow. Their feet have a greenish gray hue. The Alexander Parrot usually travels in packs. They take shelter by making cavities on medium trees. They feed on seeds, nevezil, seeds and fruits in forests. Parrot species that lay 2 to 4 eggs in the cavities they open during their breeding periods go out to hunt from the trees to look after their hatchlings within 20 to 25 days and return to the trees in the evening as a flock. The mother and father bird take care of the chicks that start to fly out of the nest within 6 weeks. 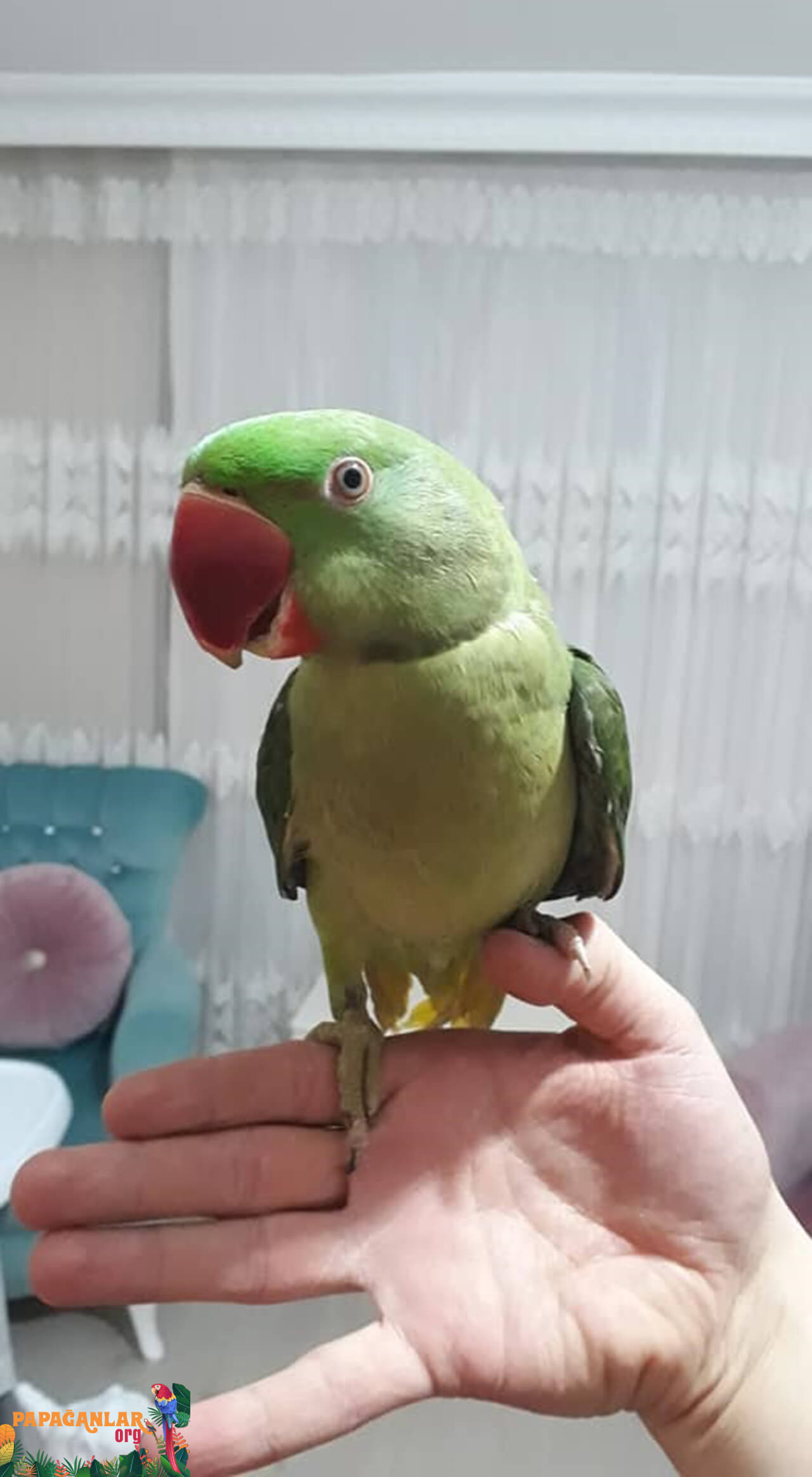 Does the Alexander Parrot Talk?

Although they travel in flocks, they are a successful species in speaking when domesticated. Alexander Parrots are parrots that you can understand clearly when talking and can learn a lot of words. They start talking when they are 8 to 12 months old. In this type of parrot spoken by both sexes, the male Alexander Parrot learns more words than the female. Some parrot species imitate their owners’ voices. Alexander Parrots do not imitate, they try to make sounds with their unique tones. A talking parrot should not be bought when buying a parrot. It is important for the parrot to bond with you and get used to the home environment at a young age. It is also useful not to overlook the following detail. It is more difficult to silence this parrot species, which has started to talk, than to make it talk. 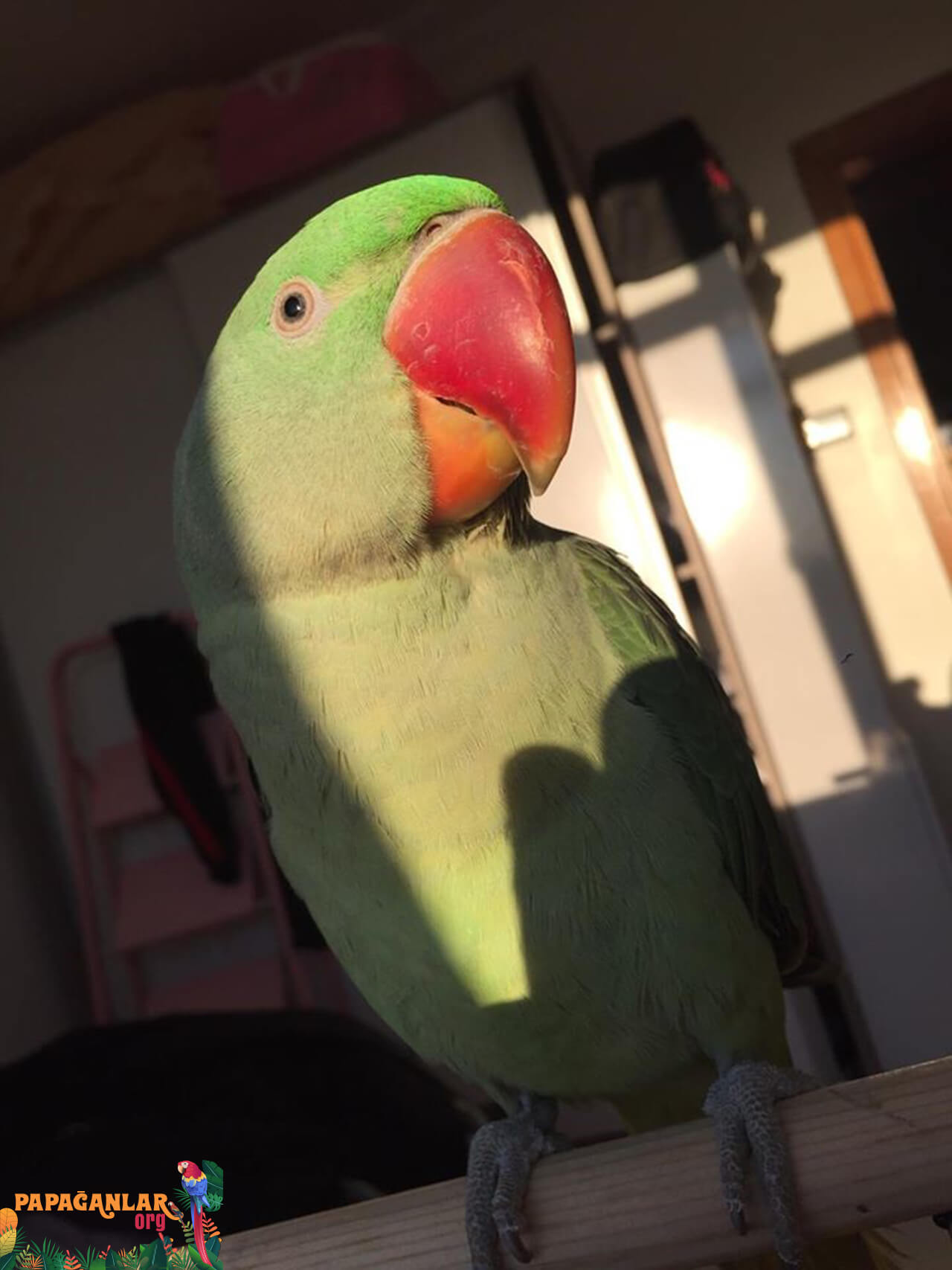 How to Distinguish Alexander Parrot Gender?

The Sexual Dimorphism phenomenon seen in many parrot species is also seen in Alexander Parrots. Sexual dimorphism is the condition in which there are differences in body size, shape, color or pattern between the female or male sexes of a species. For example, body size, lack of some organs and limbs, ornamental feathers, colors and bands on the shoulders and wings, mane, horns and ivory can be cited as examples of this definition. The selection of females has a great influence on the formation of sexes. As a result of research based on these reasons, male Alexander parrots have green tones and colors. They also have a thin black and rose colored ring on their necks. The female Alexander parrot has similar colors to the male. The distinguishing feature is the absence of rings in the neck regions. 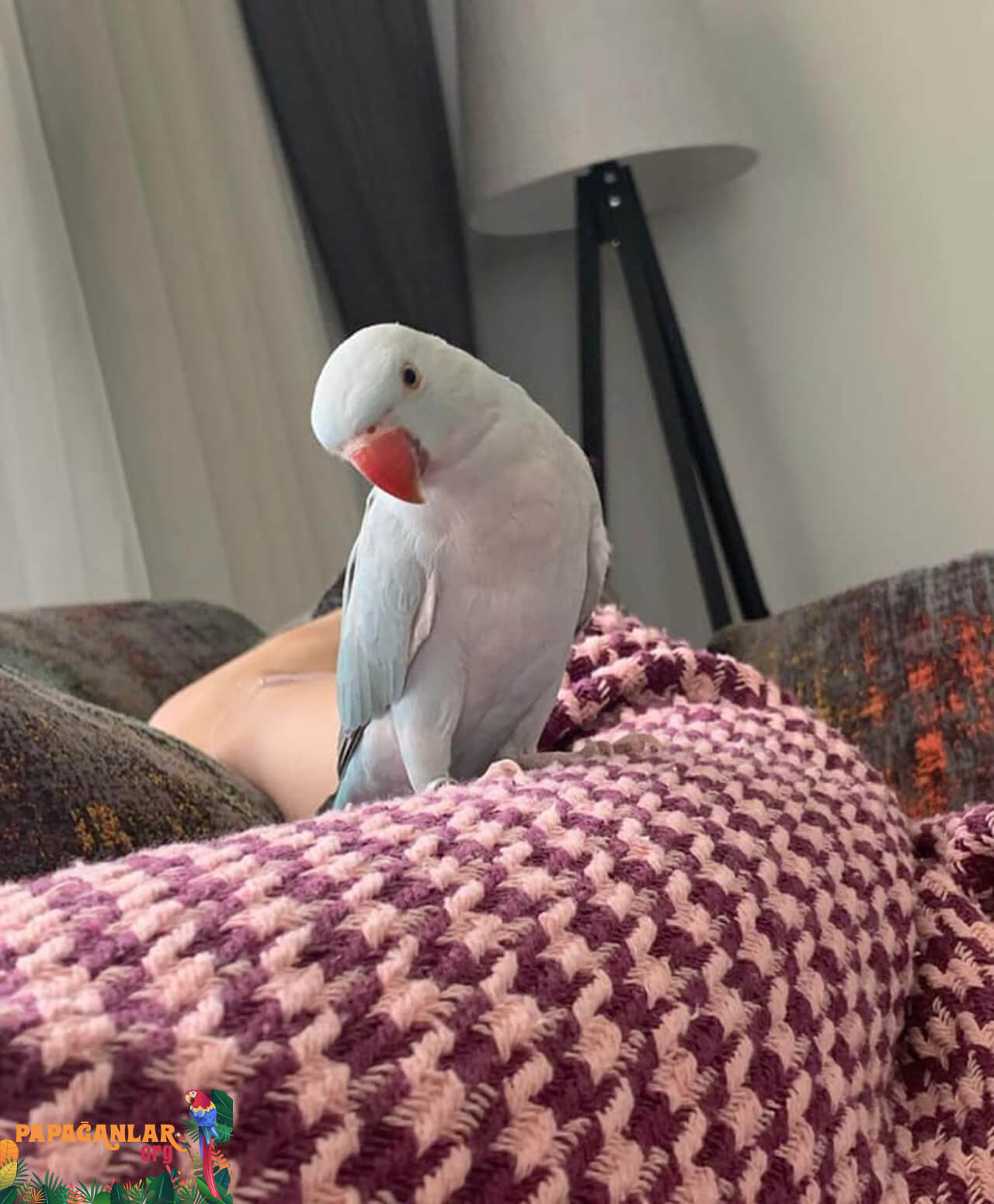 The Reproductive System of the Alexander Parrot

Unlike other bird and parrot species, Alexander parrots do not have a specific breeding season or a fixed breeding season. Since the parrot species travels and lives with a flock, the season, region and temperature factors may cause irregularity in the breeding dates. This parrot species, which breeds in the tree cavities they make, becomes very aggressive during the breeding period. This bird species, which has the instinct to protect its young, gives up moving with the herd during this period. Great attention should be paid to parrots that are kept at home and in the breeding period, not in their natural life. Alexander parrots, which should be fed in separate cages during breeding periods, may harm each other if they are in the same cage. In conflicts where injuries are observed, death can result, so separate cages are very important for the first 6 weeks. Since Alexander parrots nest on treetops by nature, they want to raise their young at the top and in a sheltered area. That’s why they should be given a period of breeding or incubation at home in a quiet room at high altitude. It is important to set the appropriate environment. 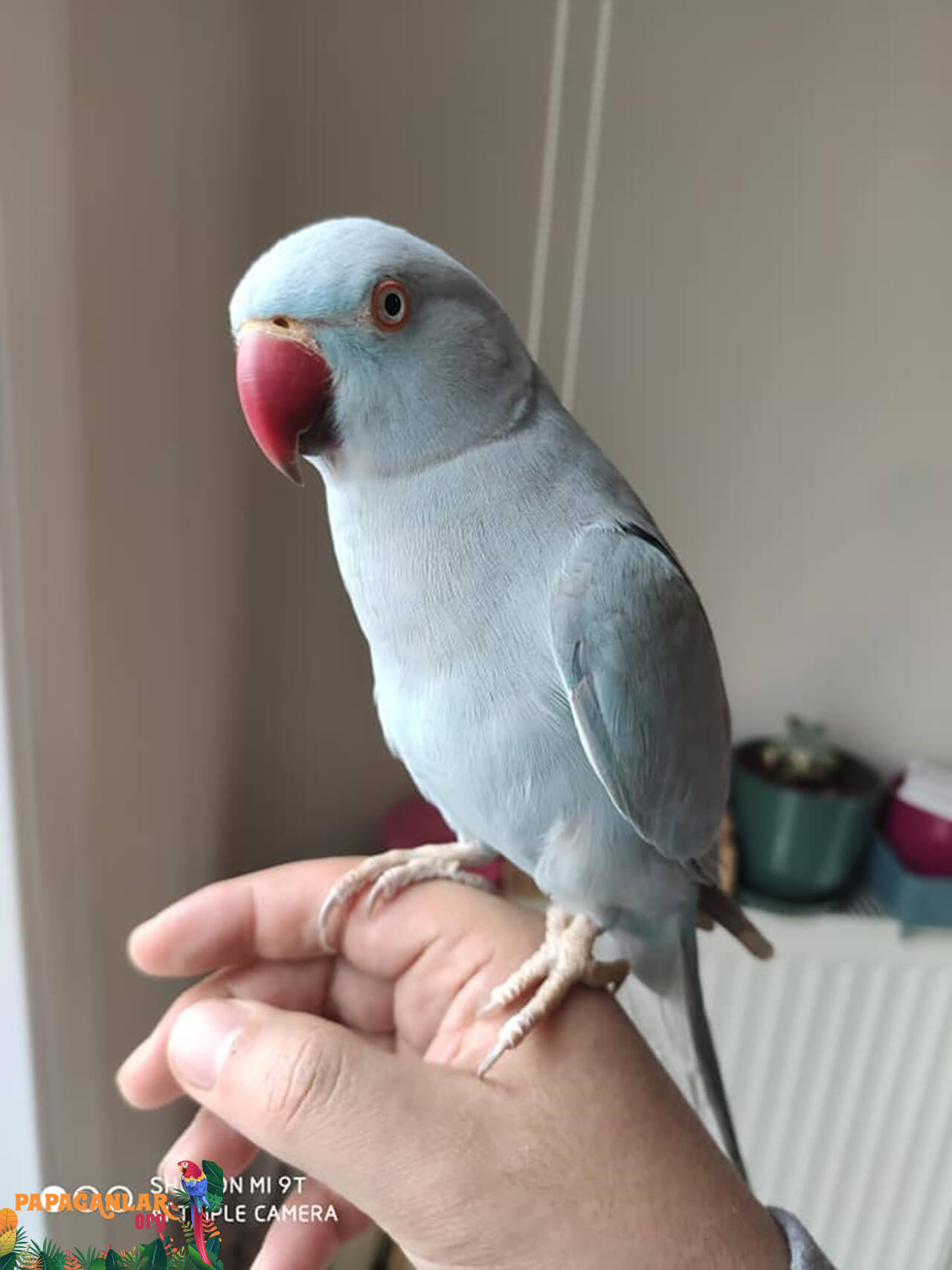 Should a Spawning Box Be Put in a Cage?

Alexander parrots stop traveling with the herd during spawning periods. Especially the female Iskander parrot prepares its nest, which it has carved on the tree, to breed with sawdust, rope and materials collected in its natural environment during this period. A suitable environment should be prepared for parrots that are kept at home. As with budgerigars, a nesting box should be attached to the cage, but unlike budgerigars, you should put the nesting box inside the cage, not next to it. Afterwards, sawdust and linen pieces should be left inside the slot. The female Alexander parrot will enter the egg-laying process by making the necessary conditions suitable. One of the most important points to consider is that wooden spawning boxes should not be used. Because the parrot, which is both angry and rebellious with the instinct of protection, damages the wooden box. A metal spawn box must be used. 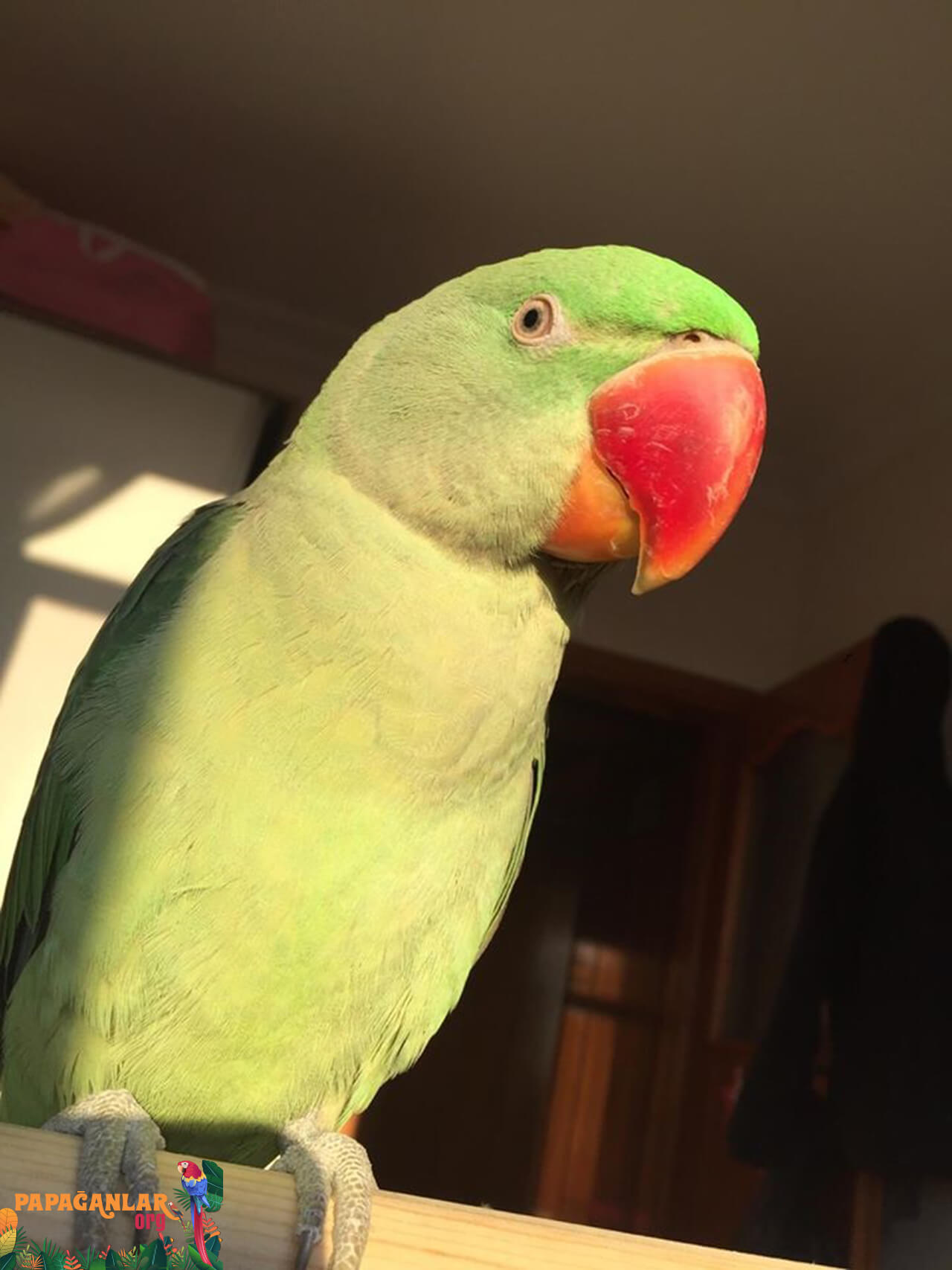 Since Alexander parrots do not have a breeding season or season, the appropriate environment and conditions initiate the breeding period. The female Alexander Parrot, which has started breeding, will lay 2 to 4 eggs during the period. Unlike broodstock and other bird species, the incubation period of the Iskender Parrot, which does not harm its eggs, is 26 days. At the end of this period, the fry, which have a 90 percent survival rate, make a small hole in the egg to breathe. This hole enlarges within 24 to 48 hours and the fry hatch. 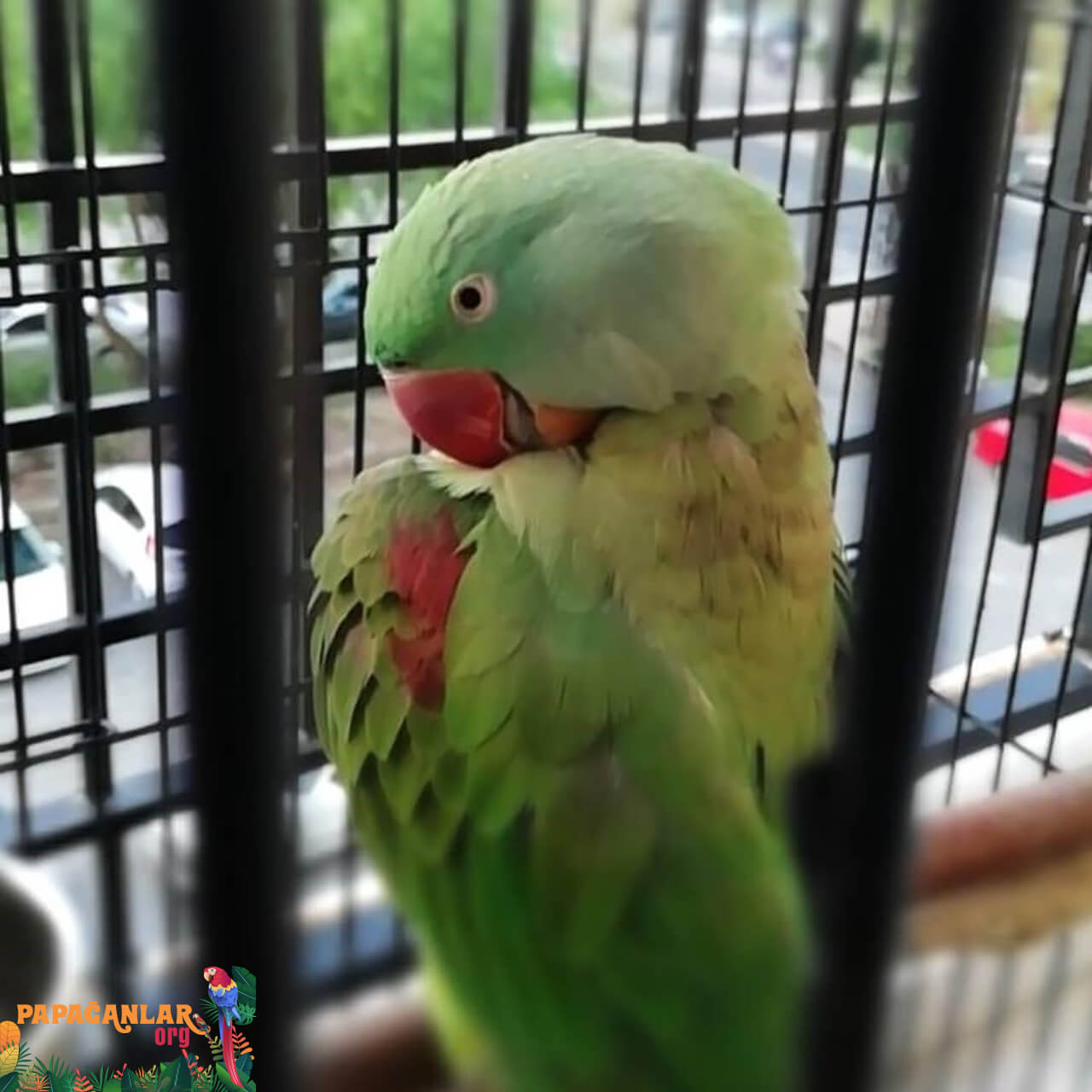 How to Care for a Baby Alexander Parrot?

The baby Alexander parrot that comes out of the egg stays in the fry for the first 7 to 8 weeks. The Baby Alexander Parrot, which has gradually completed its development, will begin to leave the nest. After 10 weeks, the baby parrot, separated from its mother, will start to take the steps of its own life. If you want to feed the parrot by hand after the 10th week, that is, if you want to care for the parrot or establish a bond, you should do this within the first 15 days. You should start the process by taking the parrot into a separate cage. 17. You should start to spend time after the day and physical contact should be completely avoided. While hand-feeding at regular intervals, the shoulder area should be stroked and it should be ensured that she understands the accent words by talking constantly. It should be spoken one by one in a way that they can understand slowly. 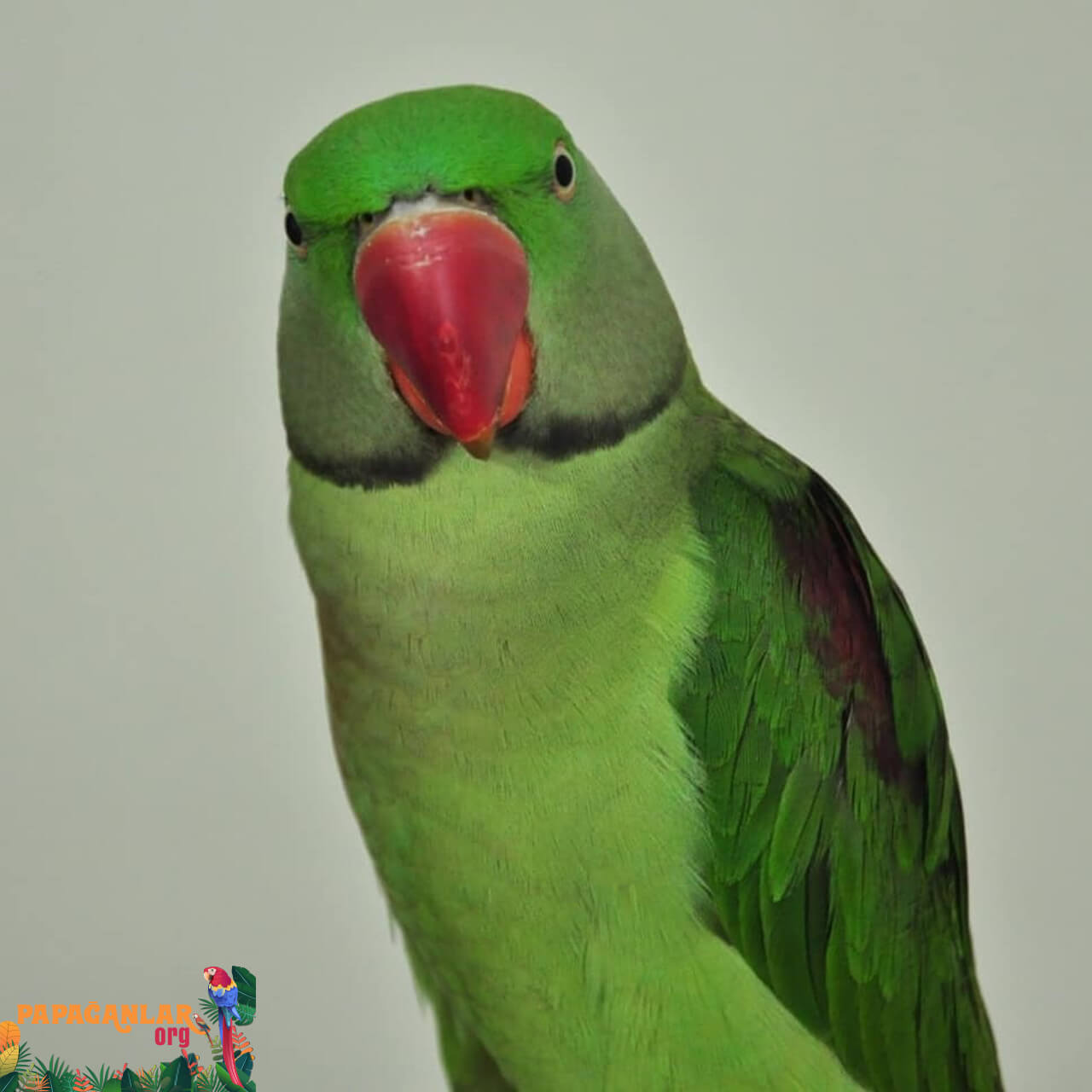 İskender Papağanı 800$ ile 2500$ arasında fiyatlandırılmaktadır. The factors affecting these prices are related to the feather, age, speech and colors of the Alexander Parrot. Parrots with bright colors and more pronounced signs of sexual dimorphism are more expensive. Because according to many species, it is understood that their descendants are not hybrids. In addition, the baby Alexander parrot should be taken. While it will be more advantageous in terms of cost, it will be easier to bond with the parrot and make it talk. 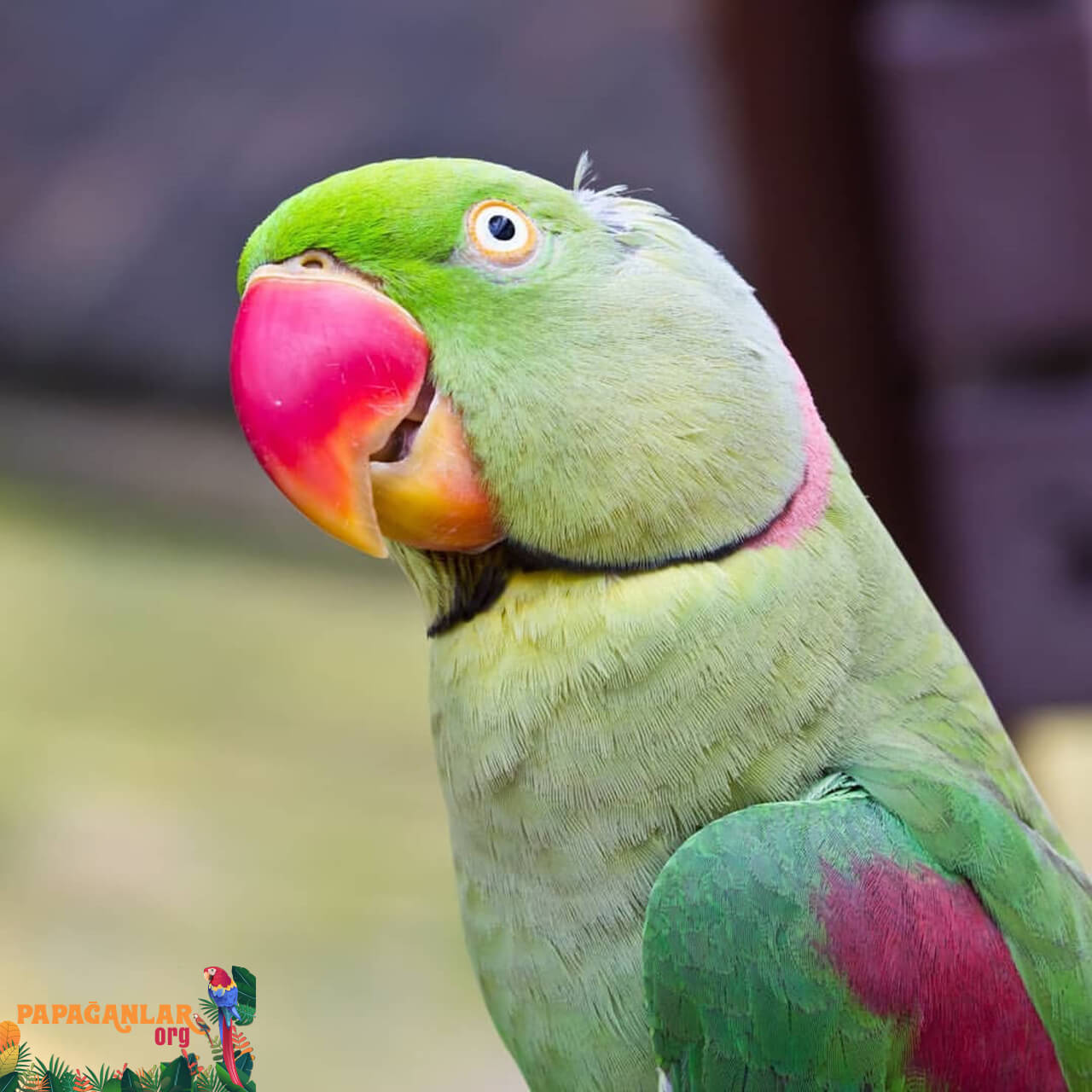 The fact that it is a parrot species that can survive for more than 30 years makes its difference to a great extent with this feature alone. Once the bond is established, she will be a loyal friend you can talk to in your lonely times. The size of the Alexander parrots and especially their tails are long, which visually adds a nobility to the parrot compared to other species. According to most parrot and bird species, they want toys to chew on. If they have enough toys, they won’t damage household items. Compared to a macaw, the Alexander parrot chews toys faster and more. They love to play with toys containing berries and dried fruits that their owner hides inside. It has an aggressive nature compared to other bird species. That’s why bonding is important. Because it has a strong beak, it should be kept away from other bird species. Budgerigars and zebra finch should not be placed in the same cage. 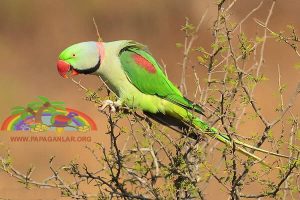 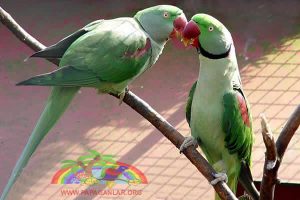 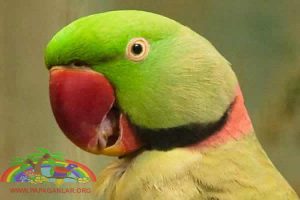 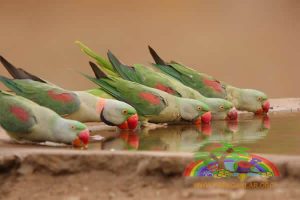 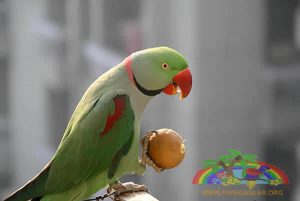 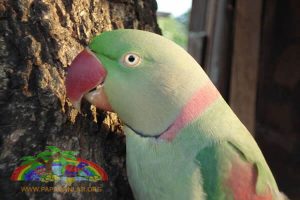 END_OF_DOCUMENT_TOKEN_TO_BE_REPLACED

The Alexander parrot is a species found within the borders of Turkey. It has a magnificent appearance as well as a green colored and lo...