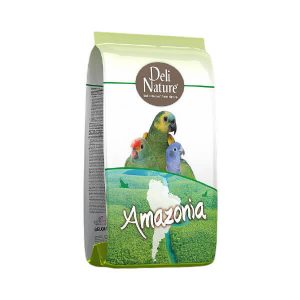 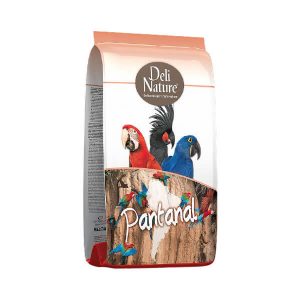 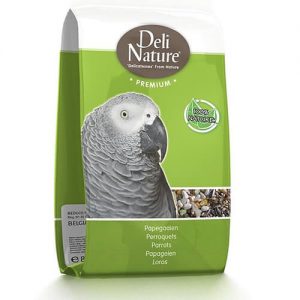 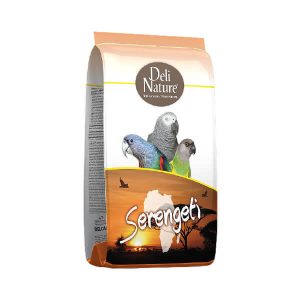 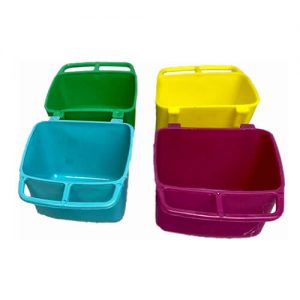 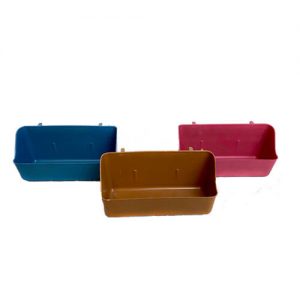 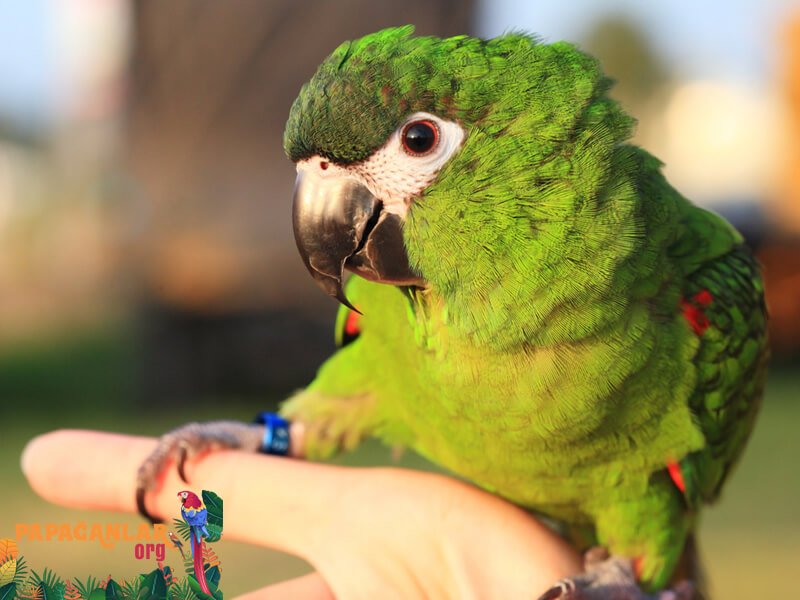 Although “Ara nobilis” was arranged as a species in the intermediate genus before; The genus, later named Diopsittaca (Ridgway, 1921), consists of a single species of “Diopsittaca nobilis”.

After the examinations, as the common features of the species in the Aratinga group are strongly observed in the Dwarf Macaw, it has been regulated as a genus on its own.

The Dwarf Macaw can be described as a bridge between the Ara and the Aratinga group, which can hardly be considered crossing either one or the other.

Dwarf macaws are known as lowland parrots of the tropical rainforest (amazon region). It is rare to find them at an altitude of 400 meters.

The habitats they prefer in their natural environment are very wide. To explain this region in the shortest way; It starts with the northeastern part of South America and continues; It stretches over the coastline of Guyana to eastern Venezuela and from there into the tropical forests of Brazil.

Open woodlands, the (outer) parts of rainforest, and moist savanna areas are mostly inhabited. In addition, they are often found in areas that are swampy and where it is not possible to enter the interior. It is very important for them to live in areas close to water. However, it is among the regions that they do not prefer in tropical forests with very dense trees.

Because dwarf macaws are frequent visitors to surrounding plantations, there is also certain damage they do to them. Only by the environmental farmers and orchard owners, the slaughter of other parrot species is not yet out of the question for the Dwarf Macaws, so that the plantations are not damaged.

Where Do Dwarf Macaw Subspecies Live? 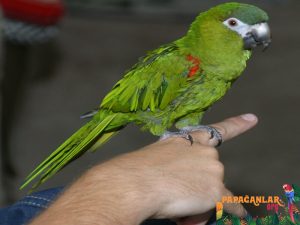 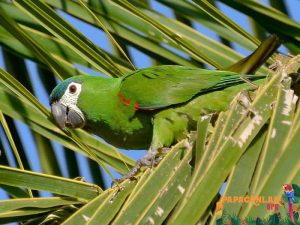 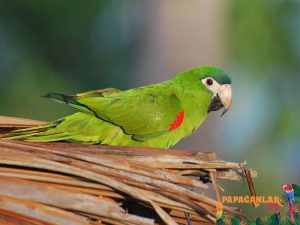 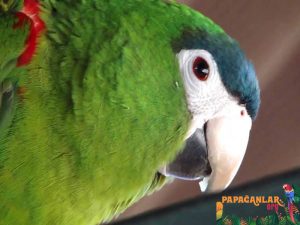 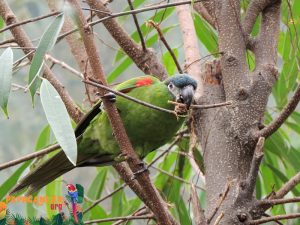 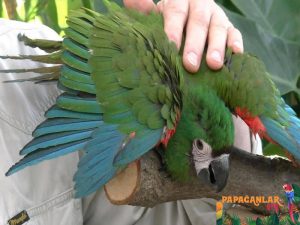 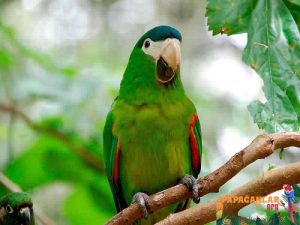 Apart from mating periods, they are generally in search of food in crowded flocks, as in Aratinga groups. The number of groups in question may consist of 10 pairs of birds, or it may be a flock consisting of 100 birds. It is also possible to see them in groups as a mix of similar species living in the region while partially foraging. This explains why they can be observed less frequently in their natural habitat compared to other intermediate species. Although timid in the vicinity of humans, they are constantly on the alert, allowing to be watched while they forage. But only brief snapshots remain of many flying aerobatic parrots. Along with the rapid and frequent flapping of their wings in flight, they have long squeaky crowing or short repetitive loud cries.

Due to the fact that this species is not yet widely known and is not among the popular species, it is one of the parrots whose population has not yet been endangered by poaching.

They are common in their habitats. Their numbers are quite high.

As it has been determined in the studies carried out in recent years; They are species that are frequently encountered in some habitats as well as their current numbers remain constant.

However, it should be added that the Dwarf Macaw species, as in other species, are threatened by the destruction of natural habitats, urbanization and illegal captures.

Height: Between 30 and 35 centimeters.

Although the dwarf macaw exhibits a bare (hairless-white) part, which is typical of the face shape, this region is narrower in distribution in them. Due to their subspecies, their size varies between 30 and 35 centimeters. The features that make up the names they get and look like brands are the turquoise bluish color of the feathers on the head. Apart from that, their main color is green, with partially varying shades. The feathers on the wing and under the tail have a more yellowish tone.

The lower wing feathers have red markings, and the outer long wing feathers are dark blue. The hairless part around the eyes in the region descending towards the beak is white. Their feet and beaks are dark gray and their eyes are brown-red.

Males and females are the same and it is impossible to distinguish them by their appearance.

Young, immature birds are easily recognized by the absence of bluish tones on their head feathers and their beak colors being more taupe.

The subspecies are easily identified with their varying sizes and beak colours. In Nobilis and Cumanensis, looking at the color on the beak is sufficient for naming. In the Longipennis and Cumanensis species, which have the same beak color, the distinguishing feature of Cumanensis is that it is larger in size than the others. The fact that there is only a size difference between them causes the Longipennis subspecies to be investigated in more detail.

They love regional palm tree nuts, especially the fruits of the Inaja Tucuma (Palm type) tree. They consume seeds, walnuts, tree buds, blackberries, fruits and plants in the region. They get their mineral needs by licking mud and clay. During the daytime, they go out in search of food alone or in groups. Their feeding is largely sustained by the noise of their beak clicks.

Mating times according to living areas; In the southern regions, it starts as of March, but in the northern regions it is in the later months. As a rule, they actually set up their nests and incubate in colonies. But the nests are built at a distance of 1 – 2 meters from each other. They are monogamous (monogram) and generally live in matings that last until the end of their lives.

They choose sheltered places for nest building. They build their nests in dead tree hollows, live palm trees, and sometimes even in tree ants’ nests to lay eggs.

The female can lay 2 to 5 eggs at a time. This lays eggs 2 days apart. The incubation period lasts between 24 and 25 days, and in this process, the fry hatch in the order of their arrival.

While the female is incubating, her feeding is covered by the male. Both parents take care of the young and feed them together.

The hatchlings begin to leave the nest in 55 to 60 days and become completely independent after 3 to 4 weeks. At the end of this period, both the older ones and the offspring begin to stay in large groups again.

Grooming a Dwarf Macaw as a Pet

This species has recently started to be seen more frequently in pet care. However, their voices are quite disturbingly loud, just like the original Aras, who are louder than themselves. In addition to this, their gnawing instincts are as strong as those that are larger than these.

There is a fact that must be accepted, however, that they are much more suitable for home feeding compared to other large Ara species.

Although they may seem timid and irritable at first, they are cute species that can get used to the environment in a short time and enter into a dialogue with the household. When domesticated, they are very playful and friendly. They are species that love to be washed.

Sometimes they can be medium and sometimes loud. Since they have a great need for gnawing and flying, fresh branches should be offered for their care, and free (out of the cage) flight opportunities should be provided for 3-4 hours during the day.

The healthiest recommended condition for their care is 3m x 1m x 2m external keels with a sheltered compartment and sleeping area (nest) instead of domestic cages.

Perhaps one of the reasons why it has been preferred recently; although they are not like gray parrots, they are apt to talk. Although they cannot say the words they have learned very clearly, they are the types who are very interested in their surroundings and try to imitate every tone they hear with great enthusiasm. Dwarf macaw, in short, is a species whose abilities are very advanced.

Of course, their care will not be easy, as in every parrot species. They need attention during the day. Definitely needs to be fed. They are very compatible species that can easily get along with many other similar species.

Especially when they are indifferent, they become species that easily lose their mental balance due to “Boredom” and “Unhappiness” and choose the path of self-harm (hair plucking and further dimensions).

Another important issue to be considered in their maintenance is the temperature level. Since it is an extremely heat sensitive species, the temperature should be at least 15 degrees in the environment where the Dwarf Macaw is. Ambient temperatures below this are not suitable for them.

In the care of these parrots, it is necessary to pay attention to their nutrition, as in the others. It is necessary to give in different forms of various seeds and plants (especially those that will be collected from nature suitable for them), green plants, herbs, as well as fruit (especially carrot, plum and apple are their favourites). In addition to walnuts and similar foods, it is necessary to give alternately semi-raw corn, different types of vegetables, types of millet (branch millet, etc.), rose hips, fresh and thoroughly cleaned branches.

In order to eliminate mineral deficiencies, it is necessary to give ready-made mineral preparations and in addition to this, regular vitamin maintenance should be provided.

Dwarf Macaw is one of the species that is very easy and trouble-free to breed.

If you have a couple who love and match each other, you need to take care of them correctly. If they are fed with suitable and various foods, it is very natural for them to pass the egg-laying stage in a short time.

Generally, the incubation period starts in March and they have about 4-6 eggs each time. Their incubation lasts about 23 days and they take care of their young for about 2 months. The cubs become independent within a week after leaving the nest.

As in all parrot species, they choose a calm environment and not to be disturbed during mating and incubation period. They do not like to have other kinds of creatures near them, they can be irritable. Even the owners’ frequent interventions in their nests can result in deep beak wounds.

A tree guest with an inner diameter of 20cm and a depth of 50cm is required for production in a home or outdoor environment. If this is not possible, a socket with dimensions of 20cm x 20cm x 60cm and (nest) inlet diameter of 8cm is required.

Dwarf Macaws are about 30-35 cm tall and weigh 150 g. The South American continent is their habitat. It is a complete tropical forest c...

END_OF_DOCUMENT_TOKEN_TO_BE_REPLACED

Dwarf Macaws are about 30-35 cm tall and weigh 150 g. The South American continent is their habitat. It is a complete tropical forest c...

END_OF_DOCUMENT_TOKEN_TO_BE_REPLACED

Parrots are a bird species that everyone loves, they have won our hearts with their colorful feathers and sweet speech. Dwarf macaws ar...

END_OF_DOCUMENT_TOKEN_TO_BE_REPLACED

The Macaw Parrot is a bird species that is often preferred by people who want to keep animals at home. Especially people who live alone...

END_OF_DOCUMENT_TOKEN_TO_BE_REPLACED

Lear's Macaw & Blue Macaws This intermediate species, named after the famous bird painter Edward Lear, stands out with its blue ...