Its dimensions are approximately 45 cm.

Lifespan: Around 30 years in the natural environment.

Production periods (in the natural environment): Between September and January. 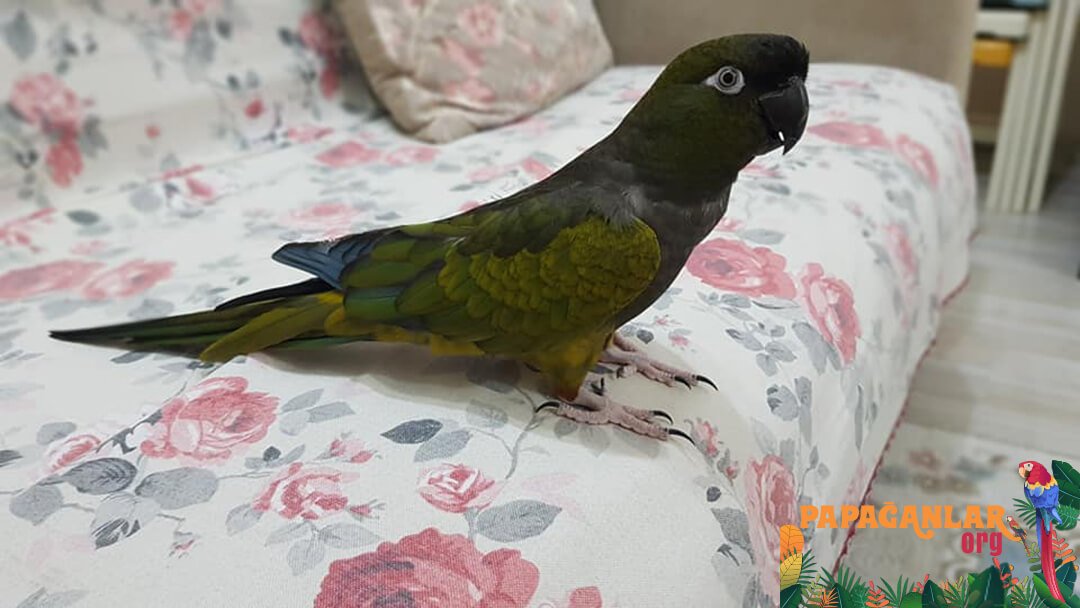 It is between 23 and 26 days. After hatching, the young birds become independent in about 3 months. Incubation: They lay 2 to 5 eggs.

Nutritional Patterns of the Patogonian Konur

It consists of fruits, seeds, nuts, peanuts, vegetable type plants. As a lone species, its habitat has been endangered due to attacks by wild animals and hunting by humans (unfortunately, because they invade the surrounding fields and plantations). In other words, it is among the protected species. Especially in Chile, one of the very rare subspecies C.P. Unfortunately, Byroni is an indispensable food in their kitchens. Again, unfortunately, puppies are collected from nests for this reason and sold in the food sector.

They are more like macaws in terms of posture and appearance (Body forms). It is impossible to separate the sexes. Male and female birds are in the same tones. The easiest way to understand young birds is as follows; having more matte hair. The eye color is gray-brown and the upper beak is partially close to beige (The beak starts to change color slowly at 8 weeks of age and reaches the full color within 1 year.)

In the southern regions, they are the most common of the new world parrots after Enicognathus. The other aforementioned species is more common in a little further south. Their habitat is mostly in savannas, open grassy lands, small rocky areas and steppes. The other mentioned species is more common in a bit more southerly areas. But they also like to haunt areas reserved especially for cultivation areas (such as corn and wheat fields or orchards). For this reason, they are hunted and disliked by farmers.

They are excellent flyers. They fly straight and fast. They are flying birds that are maneuverable enough to enter their nests that they have carved in the form of a tunnel while flying, with their wings open and without hitting any corners. 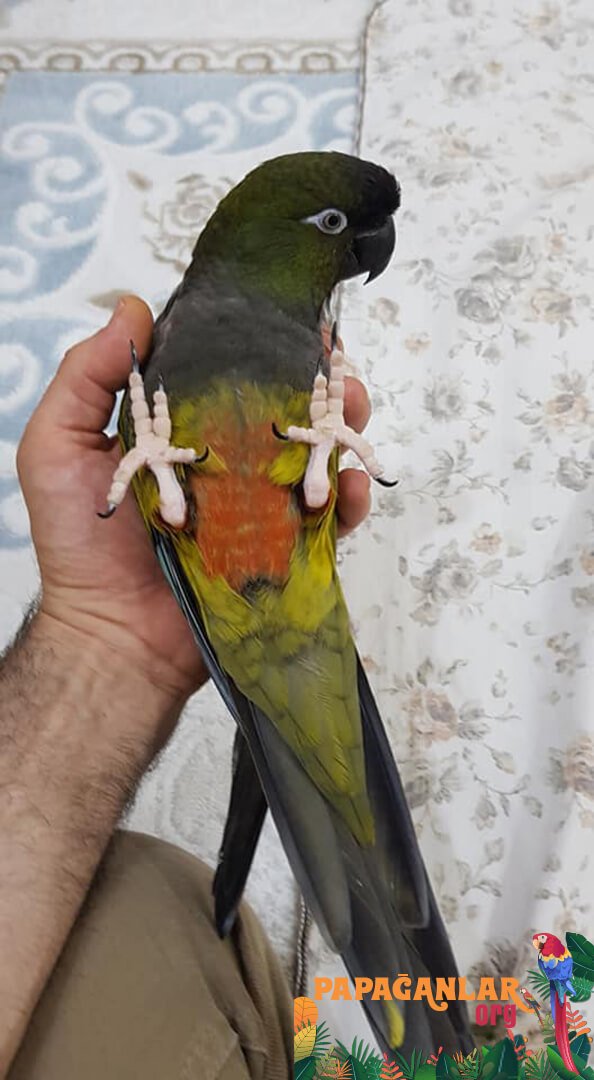 living in a colony; sometimes they come together in the form of 1000 birds or more. It is a monogamous (monogamous) species that is compatible with each other. The most important feature is that it is carved in the form of a tunnel up to 3 meters deep between the high rough stony rocks. Since the area of ​​the nests is narrow locally, the nest mouth of many birds is seen rather cramped (when viewed from the outside). Most of them are connected to each other in the form of tunnels inside, so inside it looks like a maze of caves.

While the females take care of the young for the first time during the incubation period, the males feed the female. When the pups mature a little, the parents go in search of food together. An interesting aspect is that the offspring are allowed by their parents to stay in the nest even after they have become independent.

Only in the morning there is an excessive noise in their colony. Especially if some adult birds have spent the night outside, the noises spread around in the morning with an unbelievably loud shout. They are not recommended as pets, as they are a very noisy species.

It is in colors close to the main species (nominant species). Only they are smaller. Its habitat is mostly the central parts of Chile, from north central Argentina to the south of Buenos Aires.

Although it resembles the main species (Nominant species) in color, the size of this species reaches 48 cm. It gives birth to the shoulders above the abdomen, sometimes in the form of a white band. The yellow in the abdomen is more diffuse and more pronounced. Its habitat is in Central Chile.

Similar to the main type (nominanttype) and smaller. and darker. There is no whiteness in the chest area. There is little or no yellow or red tone in the abdomen. Its habitat is Northwest Argentina.

Although it is a nice looking breed with its appearance and stance, before you decide to buy it as a pet, you should know that you need to have very understanding and sound neighbors. Or you must be living in an outer area far from the normal living area. These parrotsare a noisy and loud species. If you take into account that they volatilize very quickly and smoothly, it is impossible to look at home (room) type areas. In addition to this, there are also gnawing habits that are already known from their natural habitats. Because they can gnaw even the hardest objects and objects with their beaks. Zira gagaları ile en sert eşya ve objeleri bile kemirebilirler. For this reason, even when looking at wide keels, you should take this into account and make the arrangement accordingly. For these, more metal weighted keels should be used. 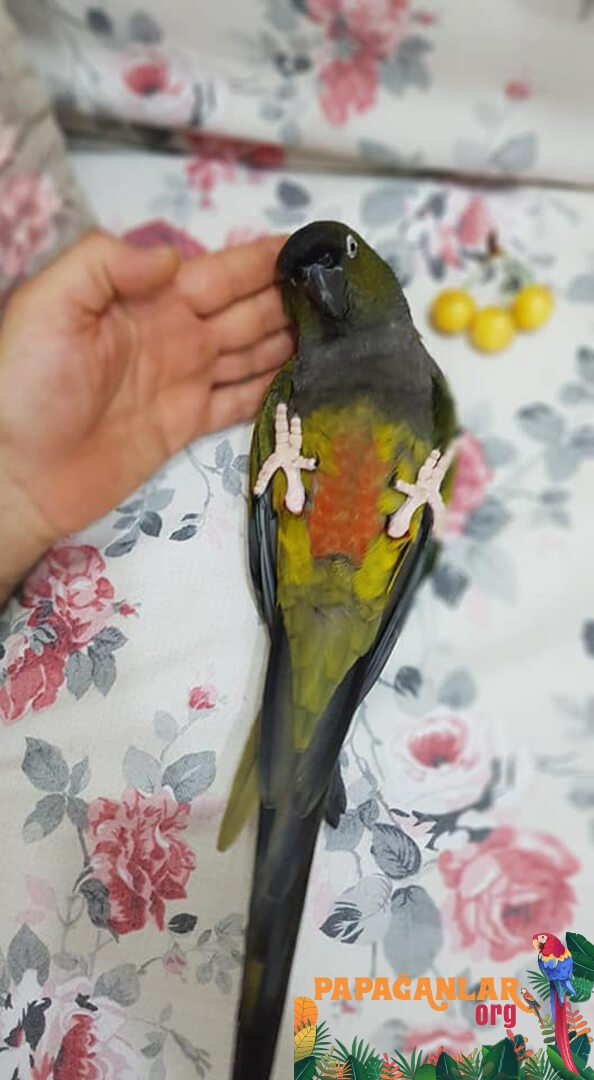 There is no need to separate the mates during the incubation period. It is also suitable for breeding in colonies in its natural environment. Therefore, it is okay in this species to keep many mates that are not in other species together.

One of their known features is that they are carriers and triggers of “Pacheo Disease Herpesvirus“. This virus does not harm them. But when brought together with another parrot species, it has a lethal feature in a short time for that species. Even if it is detected early or detected early, you cannot save a parrot that has this disease. It is thought that one of the reasons why this virus has become widespread lately is that these species are kept together with other parrots irresponsibly or unconsciously.

When it is decided to care, they are very cute, playful, but also recessive and active birds. They like to take a bath in the morning or evening often during the day. They are constantly looking for busyness. In particular, it is necessary to feed the gnawing impulses adequately.

If it is desired to have offspring in domestic care, a couple gives offspring once a year. In general, it is necessary to make their nests at least 35 x 35 x 60 cm in size. Sawdust and soil can be used as nesting material. The mouth of the nest should also be at least 8 cm in diameter. Parents do the cleaning of the nest themselves by carrying the feces of the offspring outside. What should be known is that the incubation period, which is considered the first spring in their natural environment, is between March and May in captivity.

They are easy to feed. In addition to large parrot food, they are fed easily and without problems with foods consisting of plenty of seeds and fresh foods.

Conure parrot prices are a topic frequently followed by bird enthusiasts, especially those who are interested in parrots. It has become...

END_OF_DOCUMENT_TOKEN_TO_BE_REPLACED

Conure parrots are one of the sweetest, cutest and cutest birds of the parrot family. It adds a different atmosphere to the environ...

END_OF_DOCUMENT_TOKEN_TO_BE_REPLACED

Conure parrots are one of the sweetest, cutest and cutest birds of the parrot family. It adds a different atmosphere to the environment...

END_OF_DOCUMENT_TOKEN_TO_BE_REPLACED

After the topic of Conure parrot Prices, its features are also a matter of curiosity for bird lovers. The Conure parrot has vibrant col...