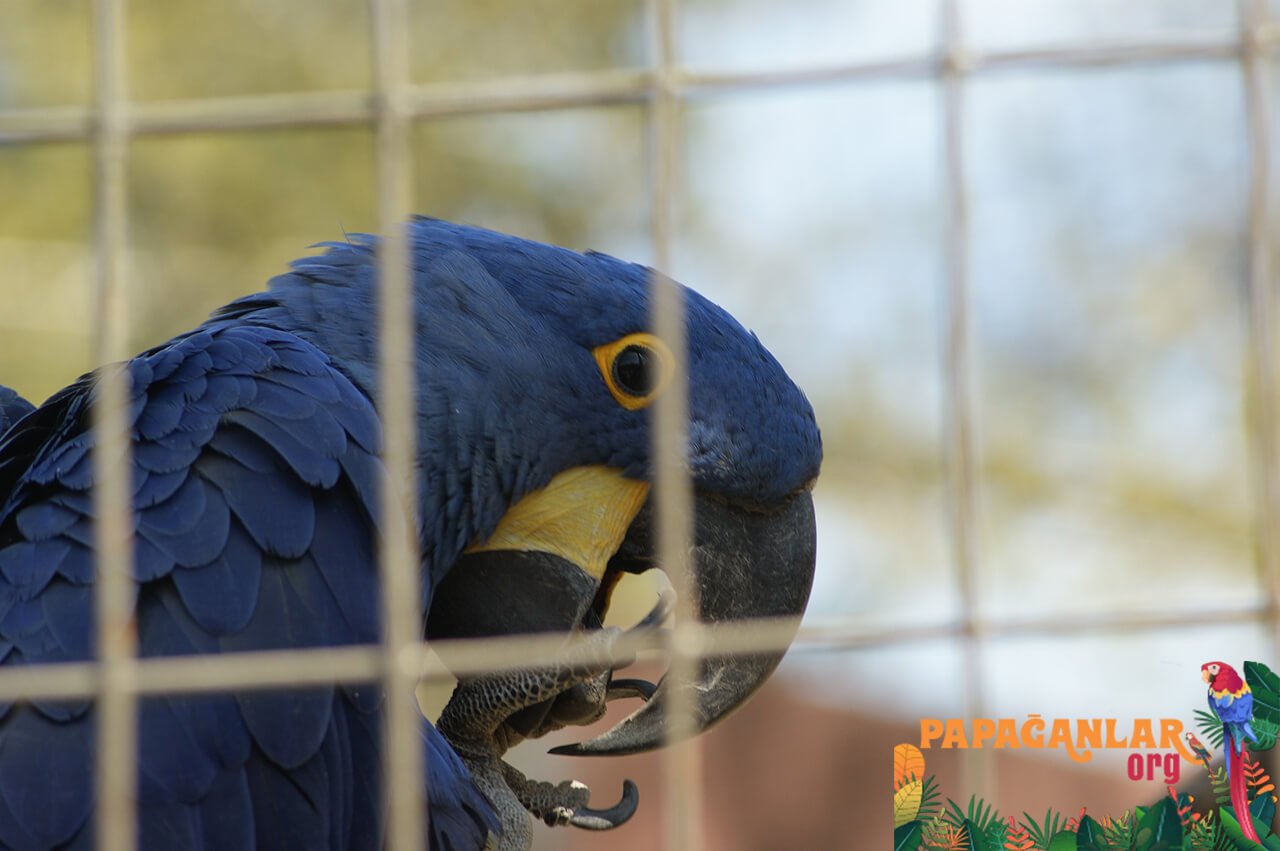 General Information About the Hyacinth Arachnid

Hyacinth ara (Anodorhynchus Hyacintinus), also known as Hyazinth Aralar, is a species of Blue Aralar (Anodorhynchus) group. With a total length of approximately 1 meter, they are the largest known parrots in the world of parrots. The hyacinth arachnids weigh around 1.5 KG, giving them the name in the world of parrots, the 2nd after Kakapo. It has taken the title of heavy parrot. These beautiful birds are predominantly native to Brazil. About 80% of the current population of this species live in the special region of Southeastern Brazil, which the locals call the “Garden of Eden”. This region is home to many living things and is the world’s largest area with high internal humidity. Although hyacinths do not have a special interest and need for moisture and wet areas, it is important for them to have a high feed requirement in the region. Hyacinths live in cooperation with the cattle of the local people living in this region. Cattle eat palm nuts; their seeds (core parts) are an important food for hyacinths. The cooperation part between them works like this: Cattle chew the palm nuts and spit out the kernels. Hyacinths are happy about this too. In this way, they obtain foods that have removed the slippery membrane in the core and become very easy to break. 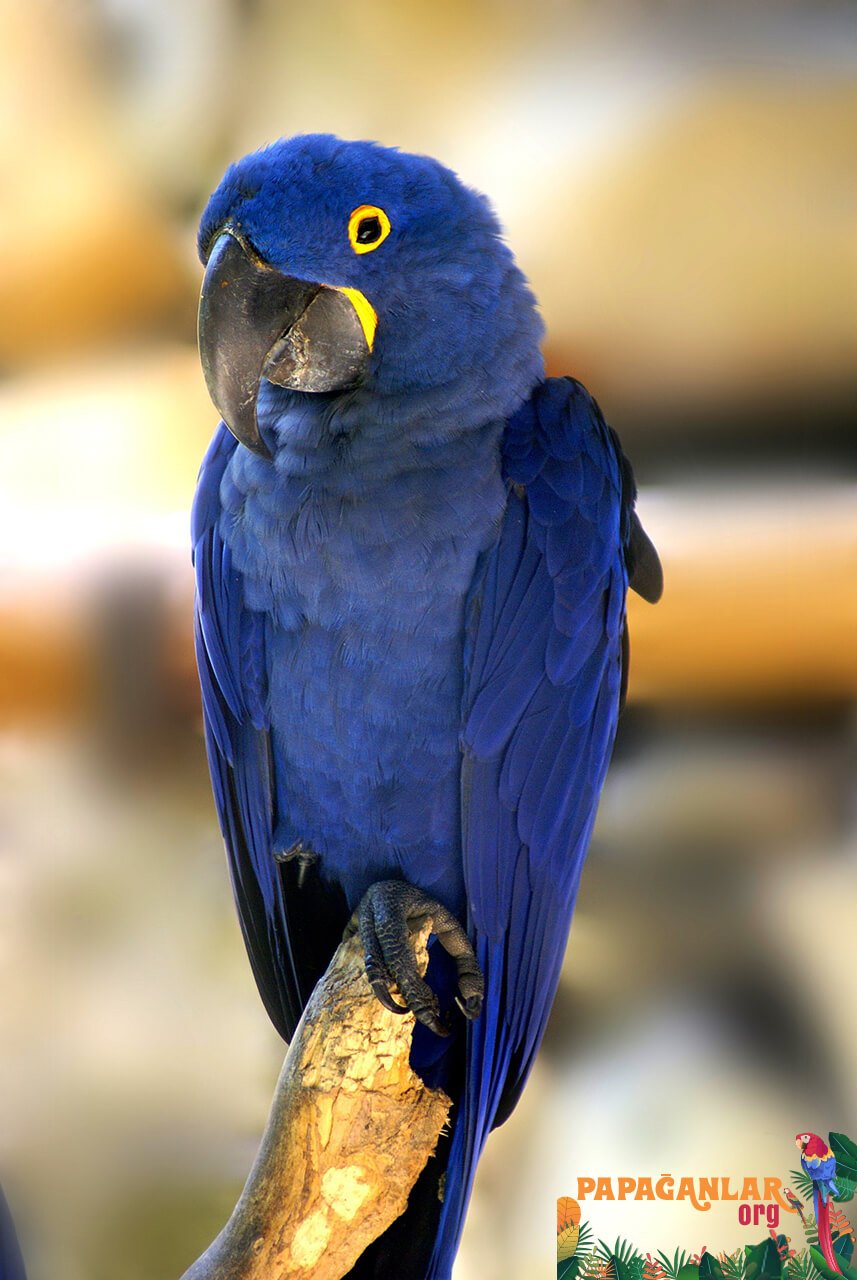 It is possible to come across hyacinths in densely sparse wooded forests and palm tree dense areas. Hyacinths draw attention wherever they are. It is one of the rare parrots that do not feel the need to hide themselves because its feathers are one color, large and heavy.

They are generally compatible species. They live together in pairs or in small groups of 6 to 12 pairs of birds. The content of these groups consists of families and young birds. Hyacinth tweens generally live monogamously. During the mating period, they leave the group and the young generation within a period of 4 months and establish their offspring. During the mating and incubation period, each couple remains on their own. It begins to protect its nest with special care. 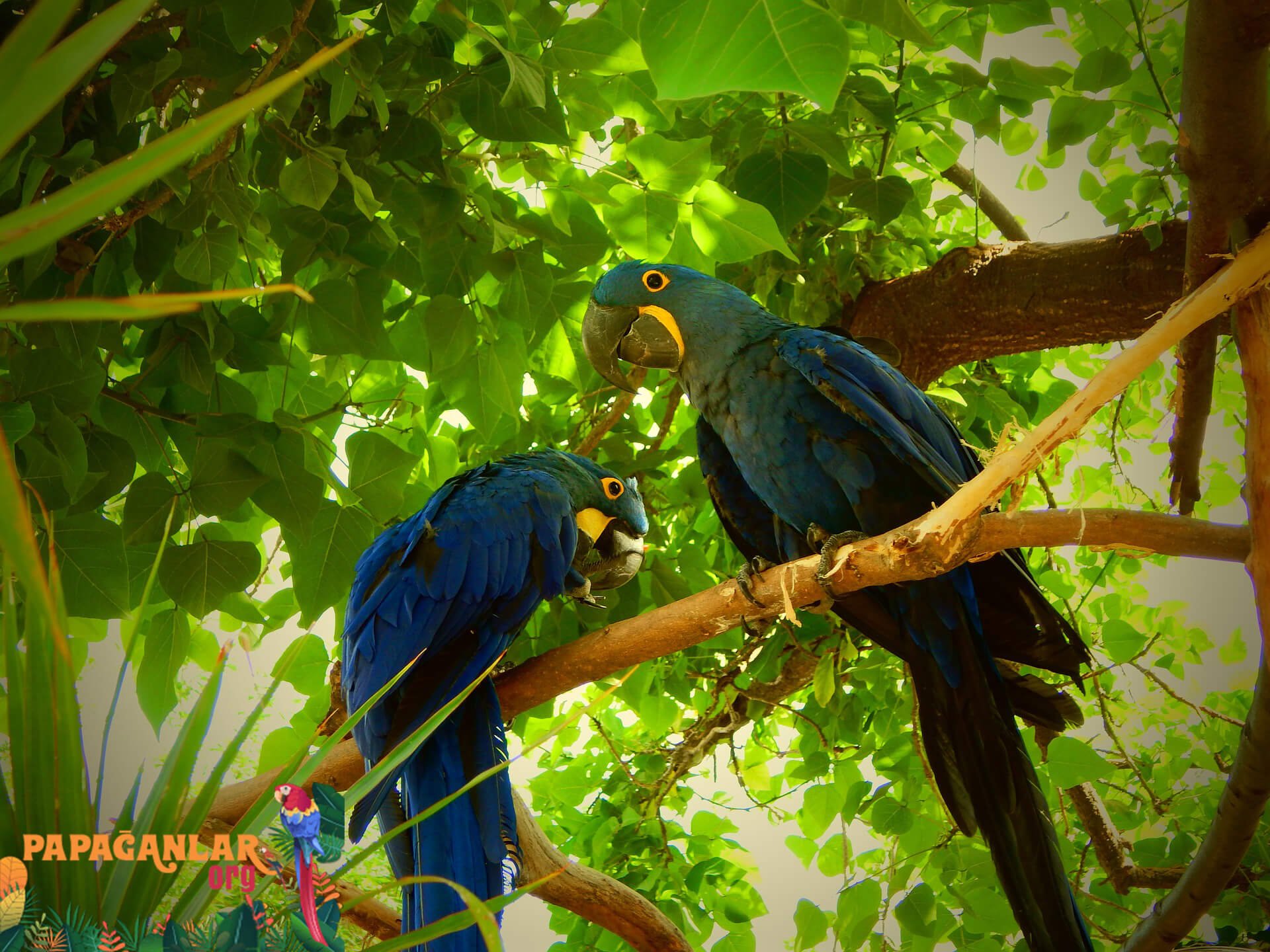 These birds, which have a life expectancy of approximately 25 years in the natural environment, have also been frequently observed to live for 90 years in captivity.

3 Different Populations are Assumed in Density: 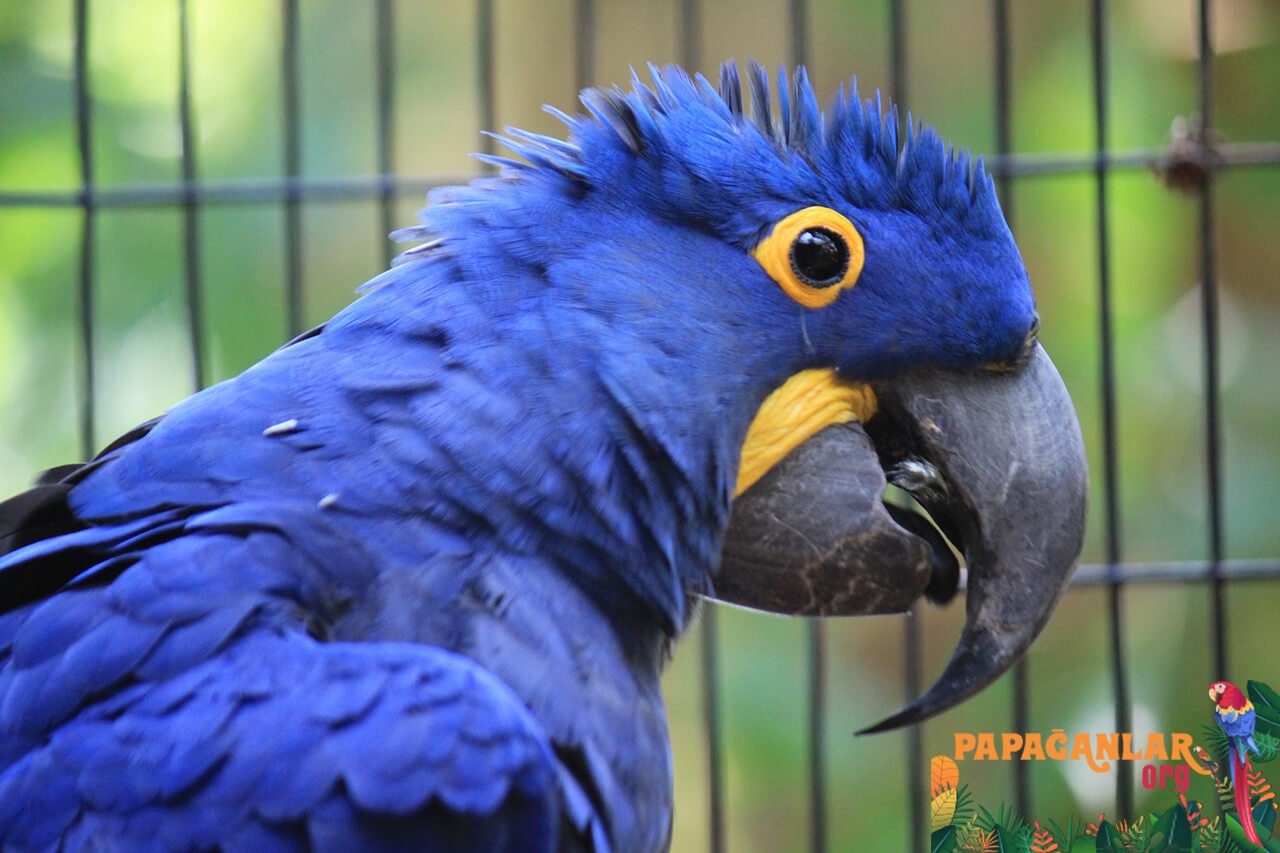 Male and female are the same color in appearance. Its main colors are vibrant, bright and cobalt blue. It has long and pointed tail feathers. The undertail is a grayish tone. There is a hairless (tensi) area around the eyes (eye ring) and the connecting part of the beak towards the chin and is yellow in color.

Its beak has a strong appearance. The lower beak is dark black, blue toned, and the upper part is black. Eye colors are dark brown, almost black. Its feet are dark gray. It has 4 toes. It has a strong beak. This is what makes them such good climbers. 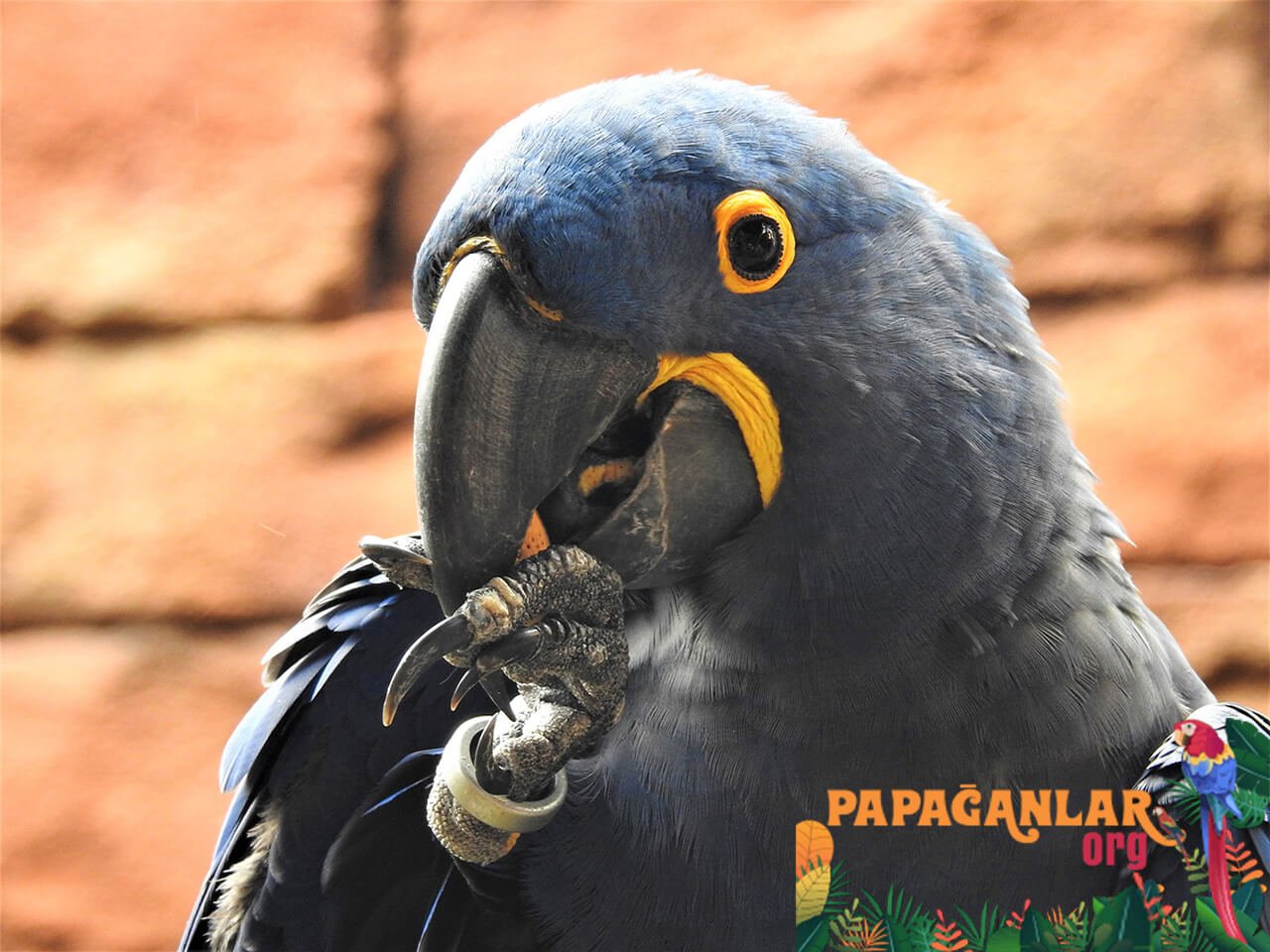 The build of young birds appears smaller and weaker. Their colors are also darker than the older ones. Tail lengths remain shorter than in older birds. The yellow hairless areas are also lighter yellow in tone.

Palm nuts (nuts) constitute the largest source of their nutrition. They are the most important nutrients that make them strong and keep them alive. Thanks to the available minerals in its content, they do not feel the need to take additional minerals like other parrots, since these needs are 100% met. Their strong beaks have also developed in a way that is suitable for consuming this hard food. In this way, they have the strongest beak among their current congeners. They turn a palm nut or nut over and over with long efforts. As a result, they always discover the breaking point.

Apart from that, their diet consists of fruits (sometimes fallen to the ground), seeds, buds and walnuts. Studies have shown that they also consume aquatic slugs.

Although they usually consume their loot in the trees, they also collect food from the ground from time to time. For Hyacinth Ara, the harder the food, the better. They are the kind that like to mess with food. They search for food in the morning and evening hours. 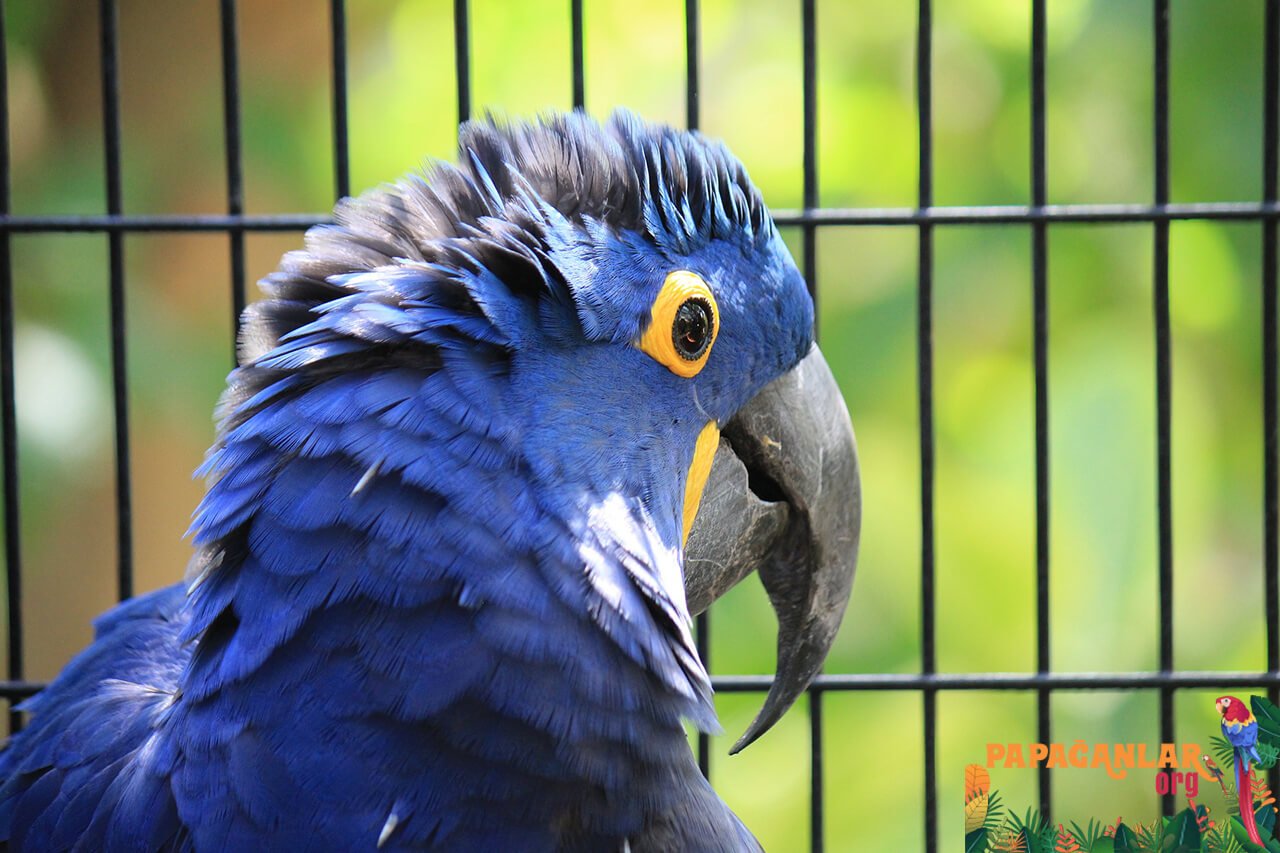 When the mating season comes, couples leave their small groups and begin to build their nests. In this regard, their preference is generally high, old and wide tree hollows (cavities). Although very rarely, some hollows (beams) between the rocks are also used as nests.

Breeding seasons vary slightly depending on the region, but generally occur between June and December. While the female is incubating, the male bird watches over the nest and feeds the female. Females incubate alone. Each brood consists of about 2 to 3 eggs and the incubation period is between 24 and 30 days. The mother and father bird feed the existing offspring together. But Hyacinth Aralar house more than 1 puppies literally take care of. Usually only one brood lives in their brood. It is very rare for this number to exceed 2. While all the attention is on this pup, the others act as insurance in case something happens to the first pup. The care of the pup takes approximately 3 months. Even if the offspring leave the nest at the end of this period, they continue to live together with their parents in small groups until the next mating season. They become fully independent at age 3 and reach sexual puberty at age 4. 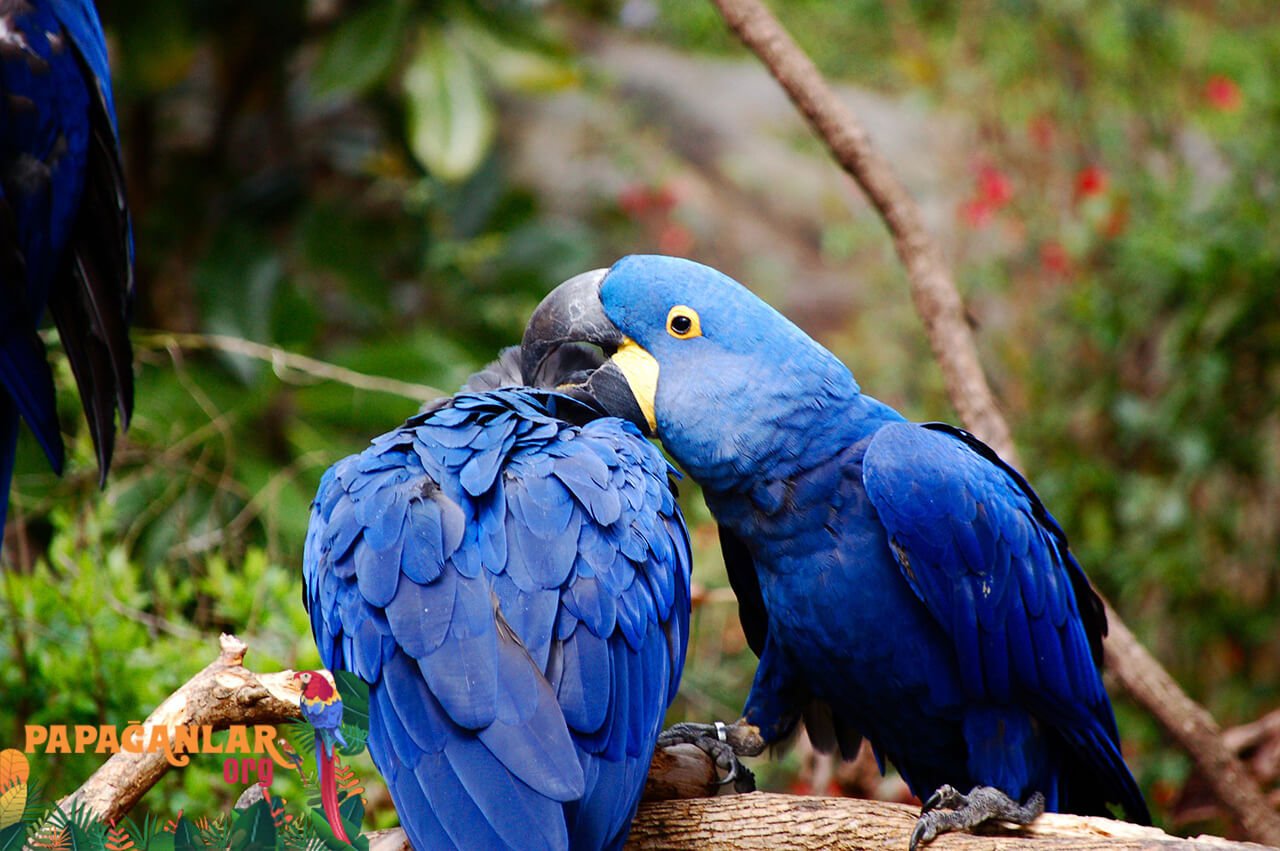 Yavru kuşlar tüm becerileri anne ve babalarından zaman içinde öğrenir. This is how they manage to survive. It is essential that they have learned feeding and living skills in natural life from old birds.

Unfortunately, the tropical rain forests, which have been destroyed as a result of the development of today’s world, are more important than thought. The importance of the tropical rainforests in which this beautiful species lives in terms of environmental balance is too great to be counted.

Hyacinths are one of the endangered and protected parrot species. The IUCN organization has put the threatened species of this species in the first place.

Unfortunately, due to the poor economy of the people living in the Brazilian region and the intense interest in this species, many illegal birds are caught and sold. The plundering of their homes by the locals cannot be prevented, even if the amount received by such local people, whose prices are between 25 and 30 thousand dollars in the black market, is 1% of the total amount. Hyacinth Aralar, which is considered the last stop for many parrot lovers, is also in demand due to its rarity. This makes their prices skyrocket among parrots. Although the risks and penalties are high, the natives do not easily stop their hunting. Because there is a great demand for this species in the parrot market. Hyacinth Aralar are caught by the locals not only for sale but also for the purpose of using their feathers and eating them.

Hyacinth Aralar is a species that appeals to the eyes of the buyers because of their monochromatic nature, which is rarely seen among parrots, and their feathers appearing as if they are polished. Being large and strong increases the urge to feed them at home.

If you want to buy a parrot of this type, which has a highly developed gnawing instinct, has a strong tendency to climb, and above all, has a strong beak structure; 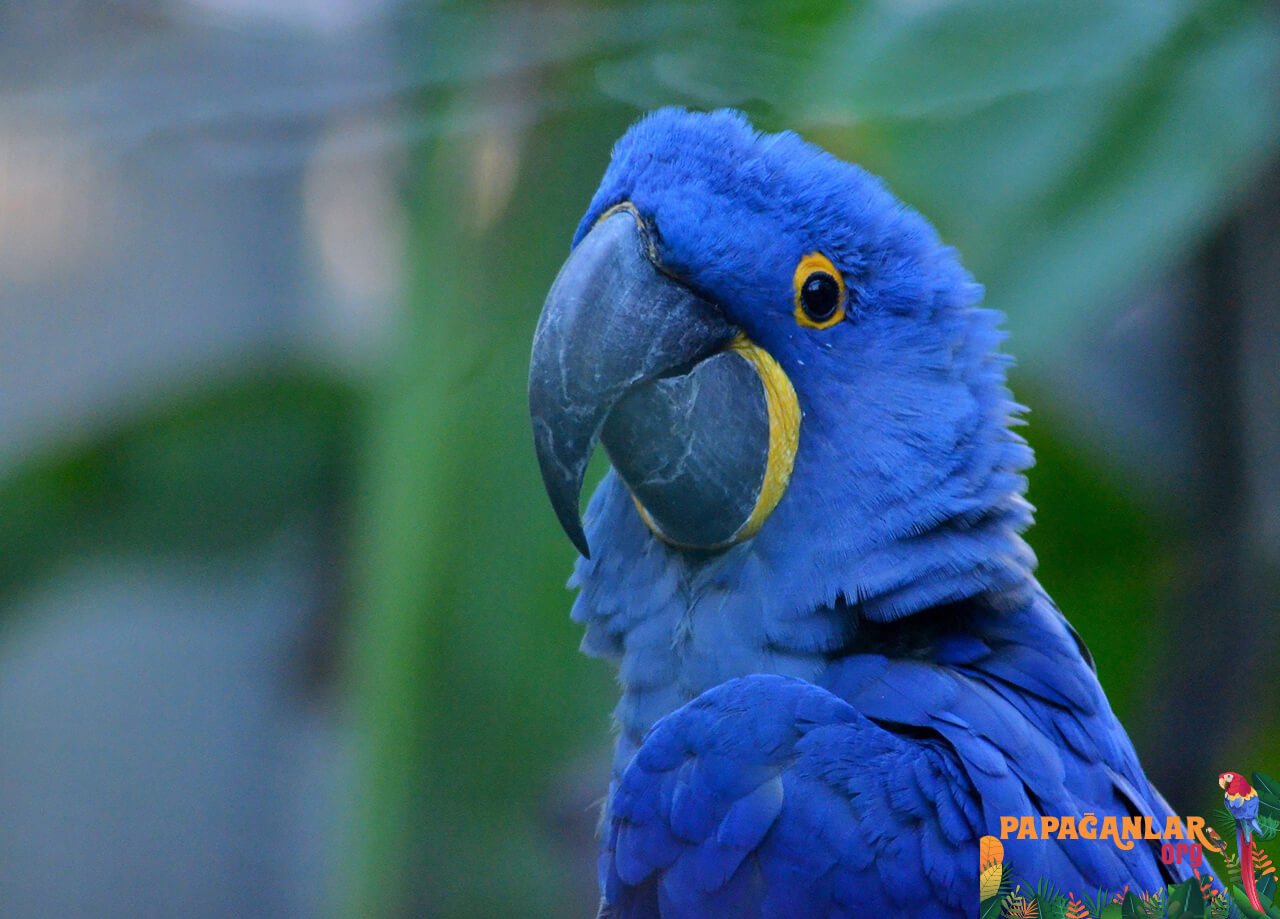 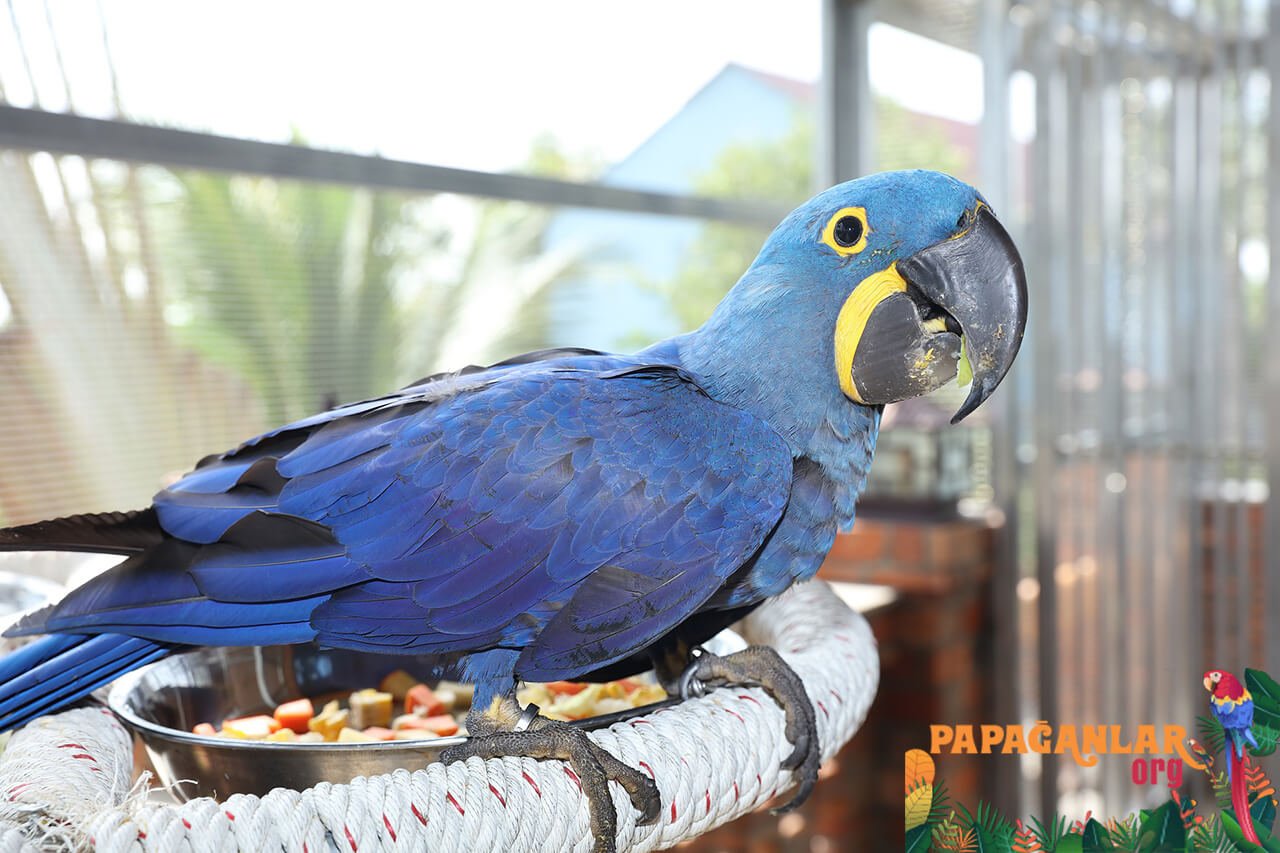 The biggest risk of getting this type of parrot accustomed to mating life is that if this need is not met, it will easily get stressed. When this problem starts, it usually plucks hair in a size that will harm itself or makes wounds in various places on its body. Therefore, if you have a decision to buy, definitely choose a parrot that has not come from the breeders, from the natural environment, and buy it as a pair. 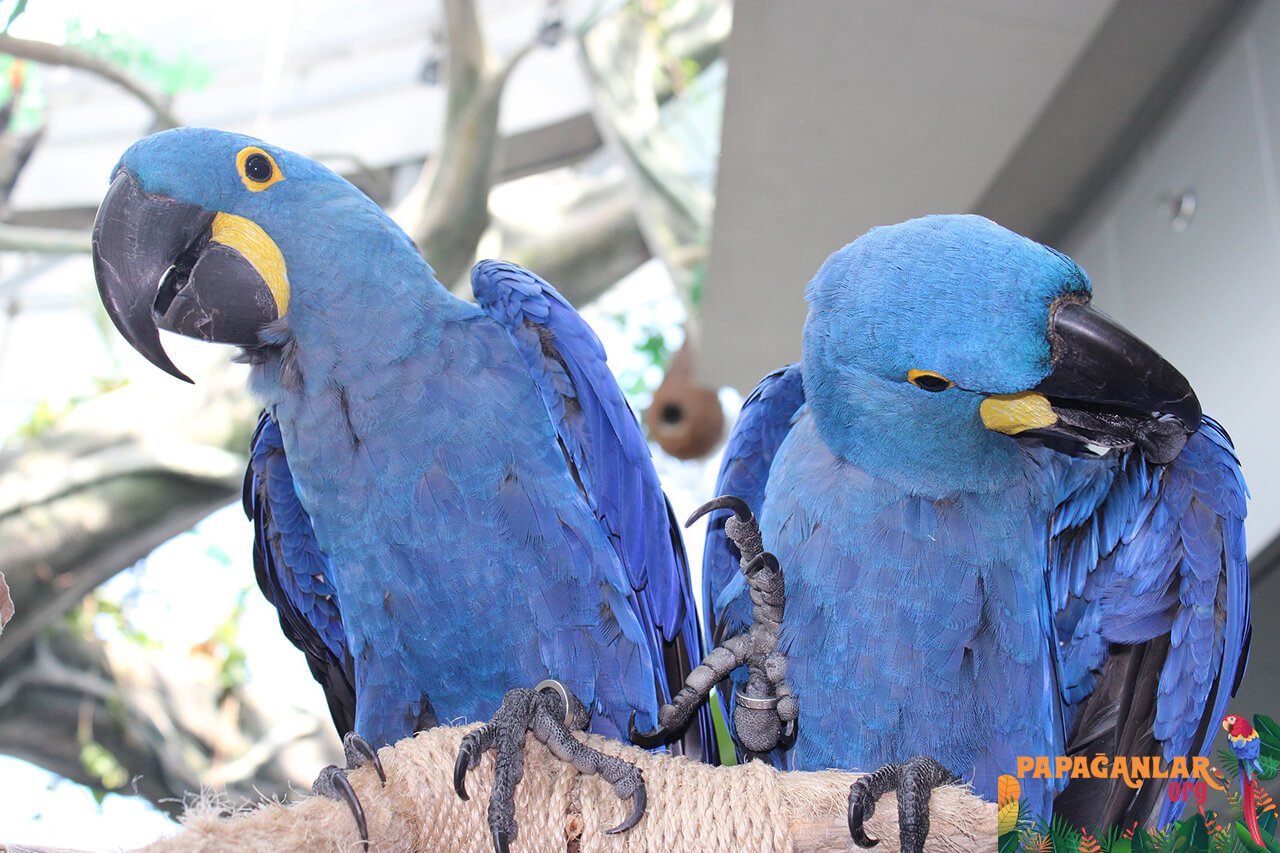 You also have to take into account that she will give you all her attention when you buy one. It is imperative that you give that attention back to her. Otherwise, they are delicate species that are very easy to get sick and die.

If you are considering production, be sure to know that their production is not easy. According to her, before taking this decision, we recommend that you get support and information from competent people.

It is also not easy for pets to feed. Although they generally eat ready-made feed mixtures for large parrots, their diet should include thick-shelled walnuts and peanuts as well as fresh foods. Fruits such as papaya and banana are among their favorites. 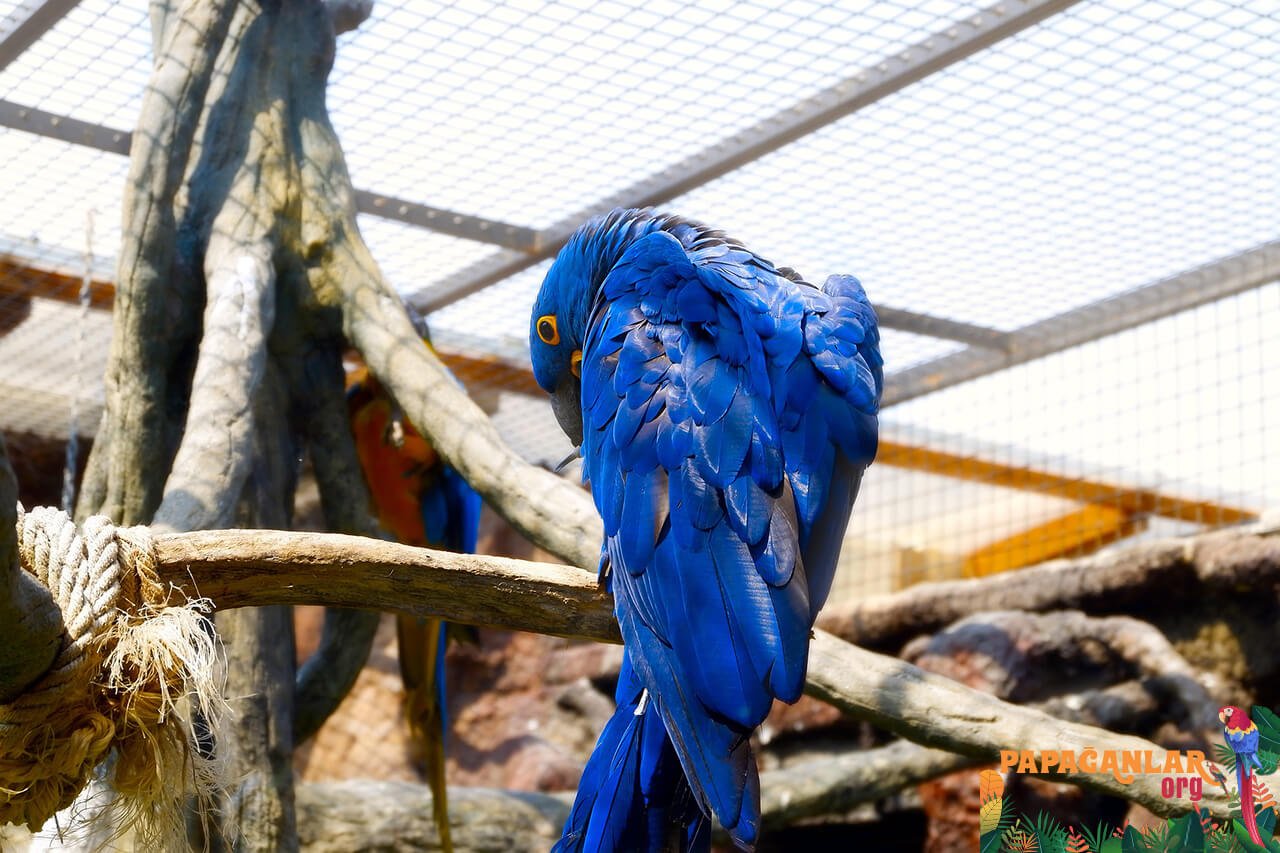 They are friendly, lovable and easily trained breeds. Although their speech and imitation abilities are not comparable to gray parrots, they make people happy with their looks. The only problem is it has strong voices. If you say that you will bear it, there is no problem in buying it. As long as; Do not prepare all the necessary conditions before buying and do not be unhappy afterwards and do not make this delicate creature unhappy.

One of the preferences of those who want to make keeping pets more enjoyable is parrots. Parrots attract the attention of animal lovers...

END_OF_DOCUMENT_TOKEN_TO_BE_REPLACED

The Ara parrot is one of the most active parrots. The general habitat of ara parrots is America. That's why the name "Ara", which means...

END_OF_DOCUMENT_TOKEN_TO_BE_REPLACED

Ara Parrot is a bird species preferred by animal lovers. Those who want to buy this animal are curiously searching for its prices. Howe...

END_OF_DOCUMENT_TOKEN_TO_BE_REPLACED

The Ara parrot species is commonly known as the macaw. That's why the prices of these birds can be a little expensive in the pet shop. ...

END_OF_DOCUMENT_TOKEN_TO_BE_REPLACED

Its homeland is the swampy areas of the South American Region. Ara parrots living in forests have a beautiful appearance. The ara parro...

END_OF_DOCUMENT_TOKEN_TO_BE_REPLACED

Scarlet Ara Parrot(Ara Macao) If this name seems very strange to you, it is actually one of the most well-known parrot species. Altho...

END_OF_DOCUMENT_TOKEN_TO_BE_REPLACED

Blue Headed Ara Parrot (Ara Couloni) General Information and Features As a species, its name is not given due to its characteristics, a...