In some parrot species, sex determination can be made based on their appearance and the color of their feathers. In nature, while male birds are more colorful and ornate than females, this rule does not apply to parrots. In fact, in eclectus parrots, on the contrary, females are more ornate, red and blue in color, while males are dull green. In budgerigars, the fleshy part on the beak, called cere, is red, the feathers on the cheeks of males, and light red or orange in females. There are also transverse stripes on the tail feathers of females.

There are three types of scientific determination methods.

Steroid is a substance formed in the body and found in the structure of sex hormones. It is found in different proportions in the feces of males and females of the same breed of birds. It is an old sex determination method, which is less reliable than other scientific methods.

It is a method based on the principle of seeing the reproductive organs of the parrot by making a small incision on the lower wall of the abdomen and entering the parrot’s abdomen with an instrument called an endoscope with a light and a camera under anesthesia. There is no harm if it is done in competent hands. Although there are some problems related to anesthesia, this situation is rarely encountered. Sobering is easier if gas anesthetics are used. It is cut from the left side of the body, under the last rib. The incision is small and does not require stitches. Accurate diagnosis rate is high.

It is the DNA analysis method with the highest diagnostic rate, based on the chromosomal differences of males and females. Living cells carry a pair of sex chromosomes. The karyotype of the parrot is determined by making a chromosome map and the decision is made by looking at the sex chromosome.

Sex Determination by Appearance in Parrots

This method, which has a very high margin of error compared to scientific determination methods, can give general information in terms of gray parrot sex. In appearance, male grays are more imposing than females. Their feet are larger. The heads of the males are large and angular, while the females are smaller and rounder. The white area at the back of the eye in females is narrower than in males. 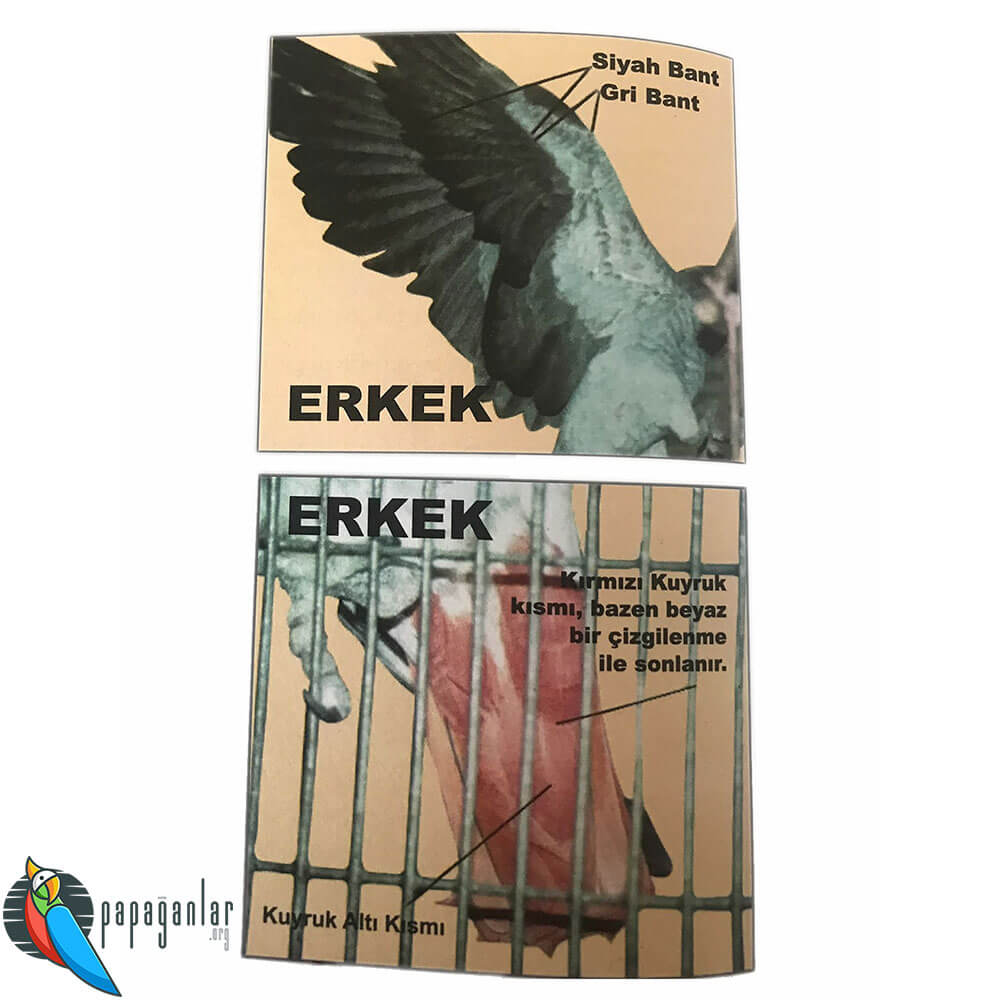 Some authors consider parrots with dark gray backs to be males. However, this color actually shows the origin of the bird and the region where it lives in natural life. In males of gray parrots living in the same region and coming from the same root, the color changes from dark gray to silver gray as one descends from the neck to the abdomen. In females, a uniform gray color is observed in the same body parts. 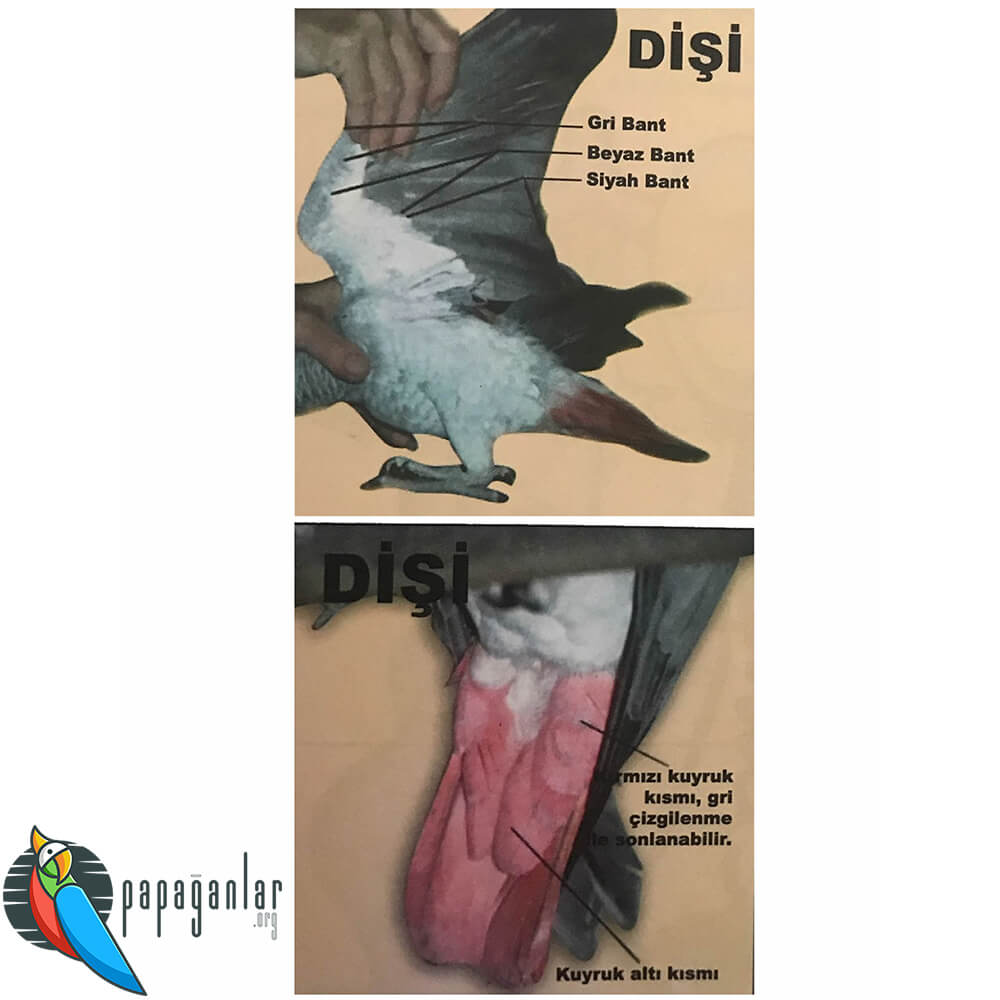 The feature of the bands under the wings can also give us information about the gender. Gray parrots have three bands in this region. Males have one black and two gray bands from the outside in, while females have a white and an inner gray band after the outer gray band.

While the iris of the male’s eye is dark brown to black in cockatoo parrots, the females are yellow-brown.

Sex determination by appearance cannot be done in young gray parrots. The parrot must be 18 months and older.

Unlike females, male birds have two reproductive organs called testicles. From here, it opens into the cloaca, the last part of the digestive system, with the deferens (descending) ducts. 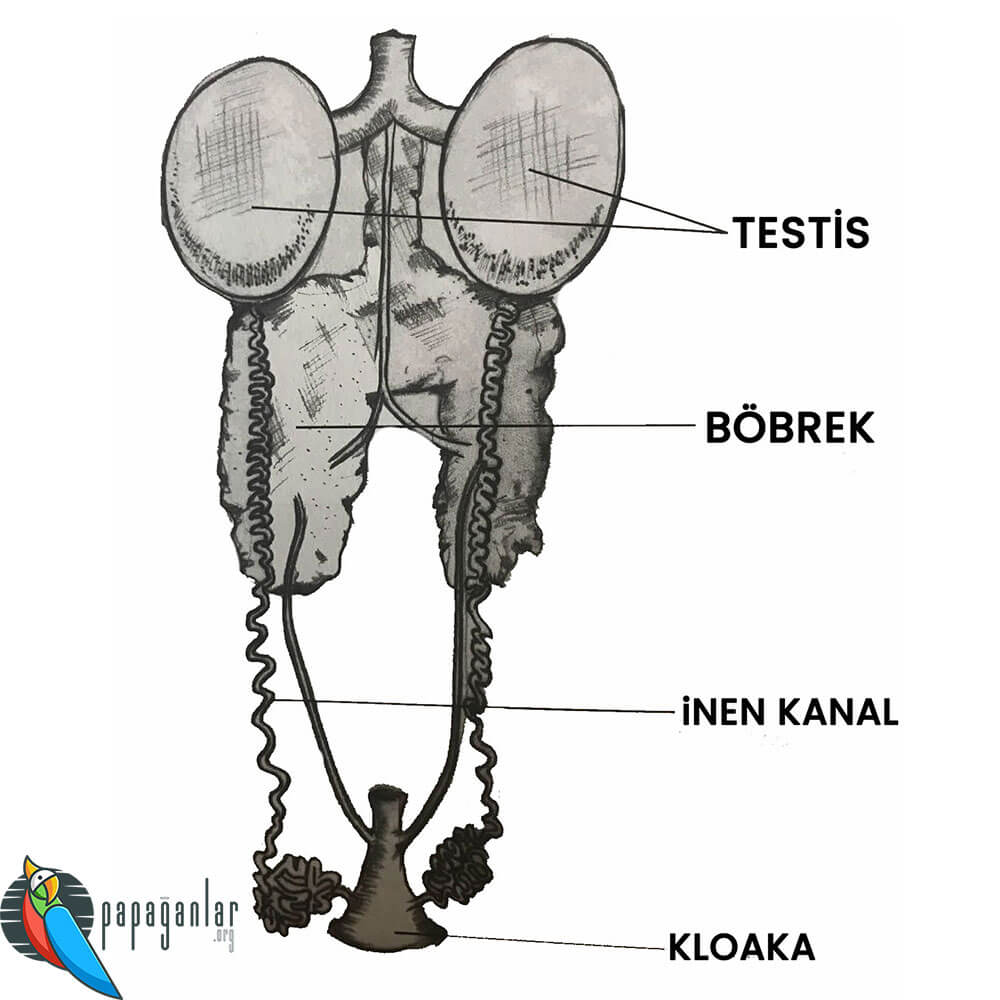 The right ovaries of female birds are rudimentary, that is, they are not developed. Reproduction is achieved by fertilizing only the eggs produced by the left ovaries. The left ovary is attached to the posterior abdominal wall of the body. After that comes the part called infundibulum. There is no continuity between the ovary and this part. The infundibulum continues with a tube. The next part is called the magnum. Then, the wide section called the isthmus begins, this section is connected to the uterus, called the uterus, with a small opening. Below is the vagina. The female reproductive system ends with the opening of the vagina into the cloaca. 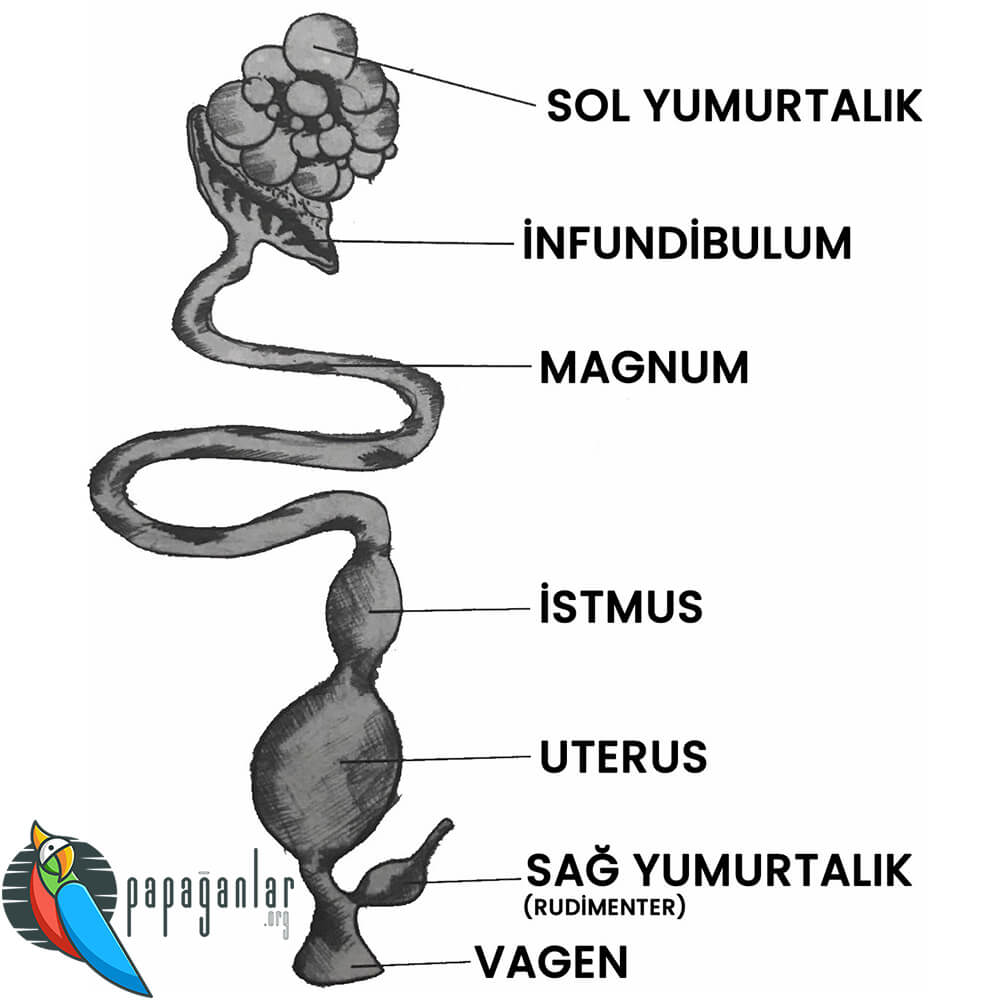 The entrance to the mating season is different for each breed of parrot. While budgerigarsreach sexual maturity when they are 6-12 months old, this period is 1 year in small parrots such as cockatiels, lovebirdsand conure parrots; 5-6 years for large breeds such as amazon parrots, macaws, eclectus macaws, cockatoos, and gray parrots.

The sperm cells formed in the testicles come to the cloaca through the descending ducts by mating. The sperm transferred from here to the female cloaca fertilize all the eggs that will form during that mating period and make them ready.

The eggs that mature in the female reproductive system fall off the infundibulum. Rarely, eggs that do not come across the infundibulum during this fall fall into the abdominal cavity and cause peritoneal inflammation. The infundibular region is the part where the sperm comes and fertilizes the egg. The fertilized egg continues on its way and reaches the magnum. Here, egg white is added around it and the upper muse comes through the tube. It takes the shape of an egg by being surrounded by a shell membrane. From here, it is transferred to the uterus and combined with the calcium taken from the blood. During this period, the need for extra calcium must be met externally. Here, the egg, which stays longer than the other parts, is surrounded by a shell, given its final shape and expelled from the cloaca via the vagina. Gray parrots lay 3-5 oval eggs per period. The interval between both eggs is 2-4 days. 2. From the egg, the female gray parrot incubates. The incubation period is 29 days. The fry are very weak when they hatch. Pubescence It takes place in the 3rd month. Until the age of about 1, they are jointly looked after by their parents.

Reproduction of Parrots in a Cage Environment

Breeding large parrots outside of their natural habitat is a very laborious task. If possible, pairs that have been paired before or who have stood together without fighting should be included in the program. Parrots prone to mating show affection by smoothing each other’s feathers. Separating such couples in a quiet place, provide a suitable environment.

Nests to be used as nests must be fairly sturdy due to the destructive nature of parrots. As a general rule in parrots, deep nests with a single entrance section are used. For gray parrots, a deep hole in a large tree stump is ideal. Because in nature, they lay their eggs in the deep hollow of the trees. 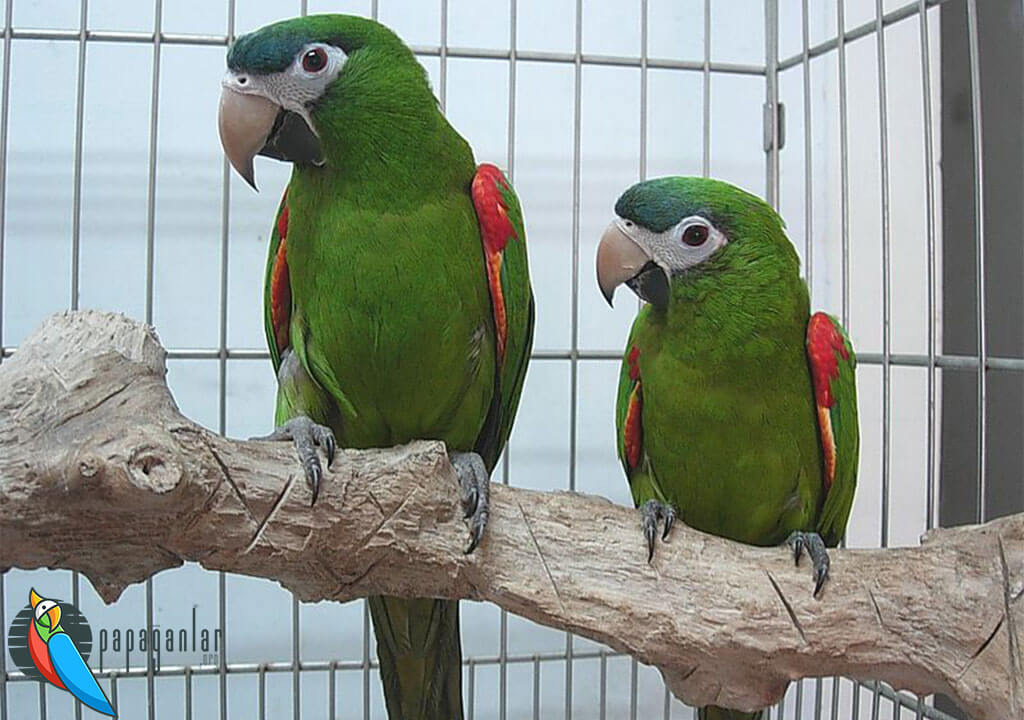 Parrots are quite aggressive with their instinct to protect the nest and the young during the incubation period. Therefore, it should not be disturbed as much as possible.

The fetus that develops inside the egg gets its food from the yolk and its calcium requirement from the shell, completes its growth and breaks out of the shell.

The method of obtaining parrot babies with an incubator is a technique that has been developed in recent years. This method, which is expensive, also requires a lot of knowledge and experience.

Machine; It works with the principle of obtaining fry from eggs in a constant temperature environment created by adjusting the humidity rate, thanks to the heater and thermostat located roughly in an incubator cabin. It works with the principle of obtaining offspring from the egg in an ideal heat environment for parrot eggs. The ideal temperature for parrot eggs is 37.2 °C. By keeping the machine out of direct sunlight, excessive temperature rise is prevented. 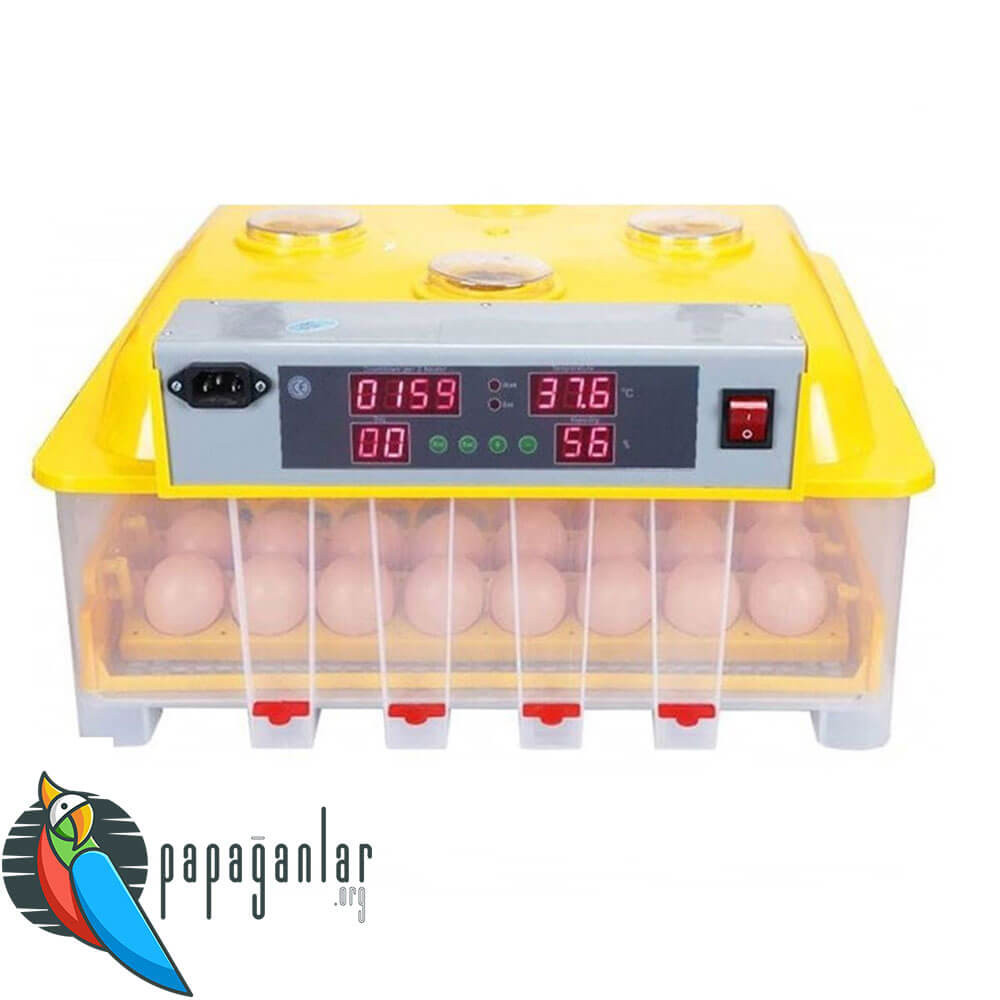 If the egg loses excessive water due to low humidity, the air gap will form earlier and larger than normal. This causes the baby parrot to hatch prematurely. These weak puppies are very difficult to care for by hand. In addition, due to fluid loss, their kidneys cannot function adequately.

During the incubation period, lay the 1st egg. When you hold it to the light source from the end of the week, if there is no problem in fetal development, an increase in density is observed in the middle part. As the days pass, this intensity increases even more. In fertilized eggs or offspring that have stopped developing and died, this density is absent or low. No increase in density is observed in the following days.

At the end of the incubation period, healthy offspring are strong enough to break the egg. In this period, the egg yolk that feeds the parrot chicks continues to provide nutritional support for about 4 hours after hatching, unlike other birds. First, water is given and the baby parrot diet is started to be fed. Specially formulated foods are used here.