The word kakadu comes from the Malay word “kakatua” (meaning pincers). With this meaning, the strong and large beak of this species is meant. If there is someone among you who has been bitten by a cockatoo, it will also confirm that this word fits exactly.

The cockatoo family consists of 6 classes and 21 species. For this reason, cockatoo are also counted. 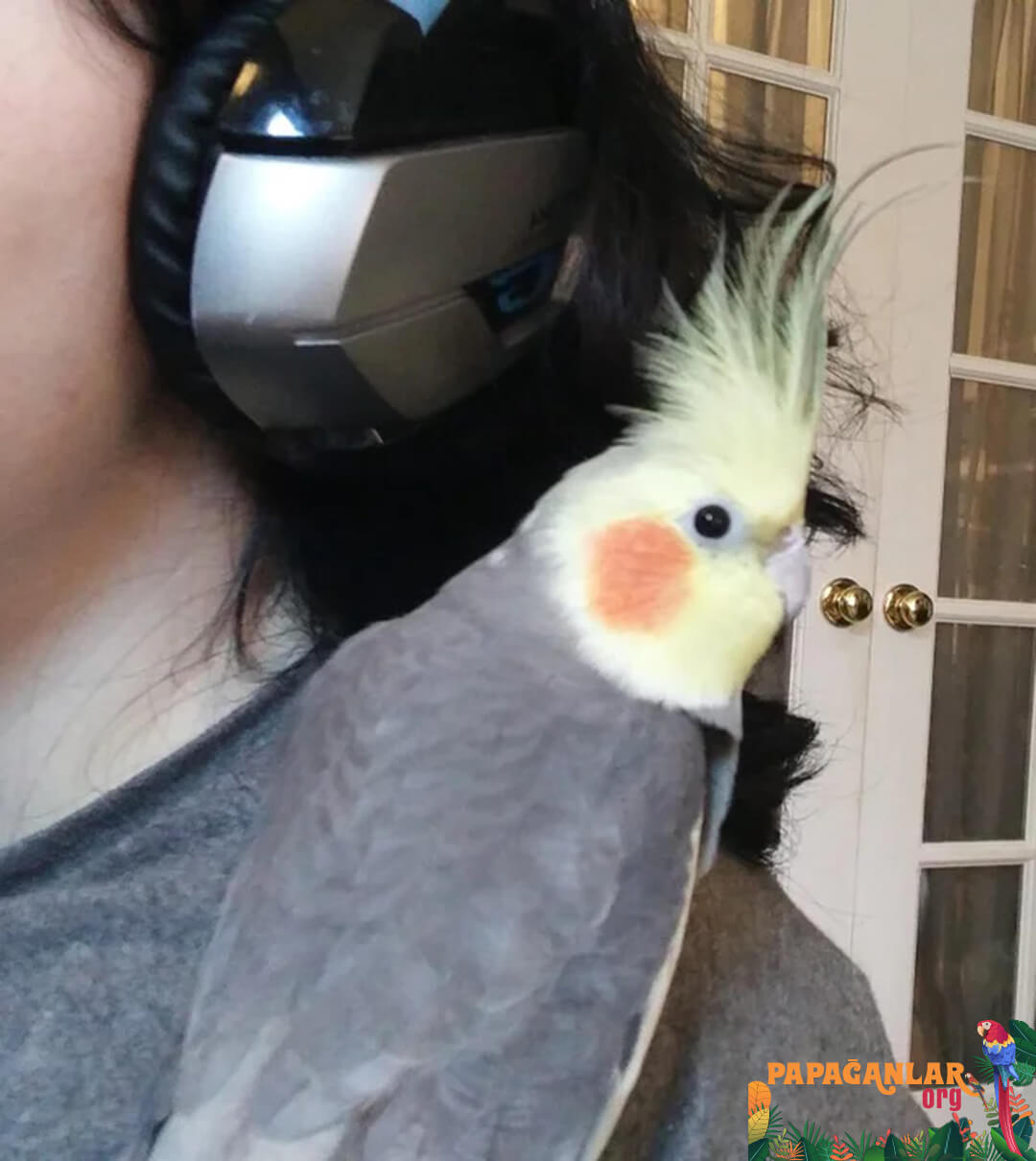 Although cockatoos are not as multi-colored as the South American parrot species, they are mostly monochromatic and mostly white (there are also black, pink or gray ones. Some smaller species may have color zones different from the main color) and have more caps on the top of their heads. opens in many varying colors. This hat is opened when they are excited, overjoyed, afraid, paying attention to something, that is, according to their current mood and creates a very pleasant appearance.

Another striking feature of this species is its large and very strong beak. They are strong enough to kill a large animal with this beak. Cockatoos have the ability to not only open and close their beaks, but also move them to the right and left. In this way, they break even the hardest walnuts or foods.

Like other parrot species, females have 4 toes. With these, she can easily grasp the food and bring it to her mouth.

Another aspect of cockatoos is that they have gall bladders and have a different feather structure and feather dust. This powder is a fine powder that gives their feathers the care they need.

Cockatiels are also counted in the cockatoo family. Because their appearance (combs on the head), the feather dust formed and the behavior patterns in the incubation show similar characteristics.

Cockatoos are in the group of medium-sized and large parrots, with species ranging in size from 36 cm to 80 cm. It is among the long-lived parrot species. They can live 60 to 100 years or even longer. 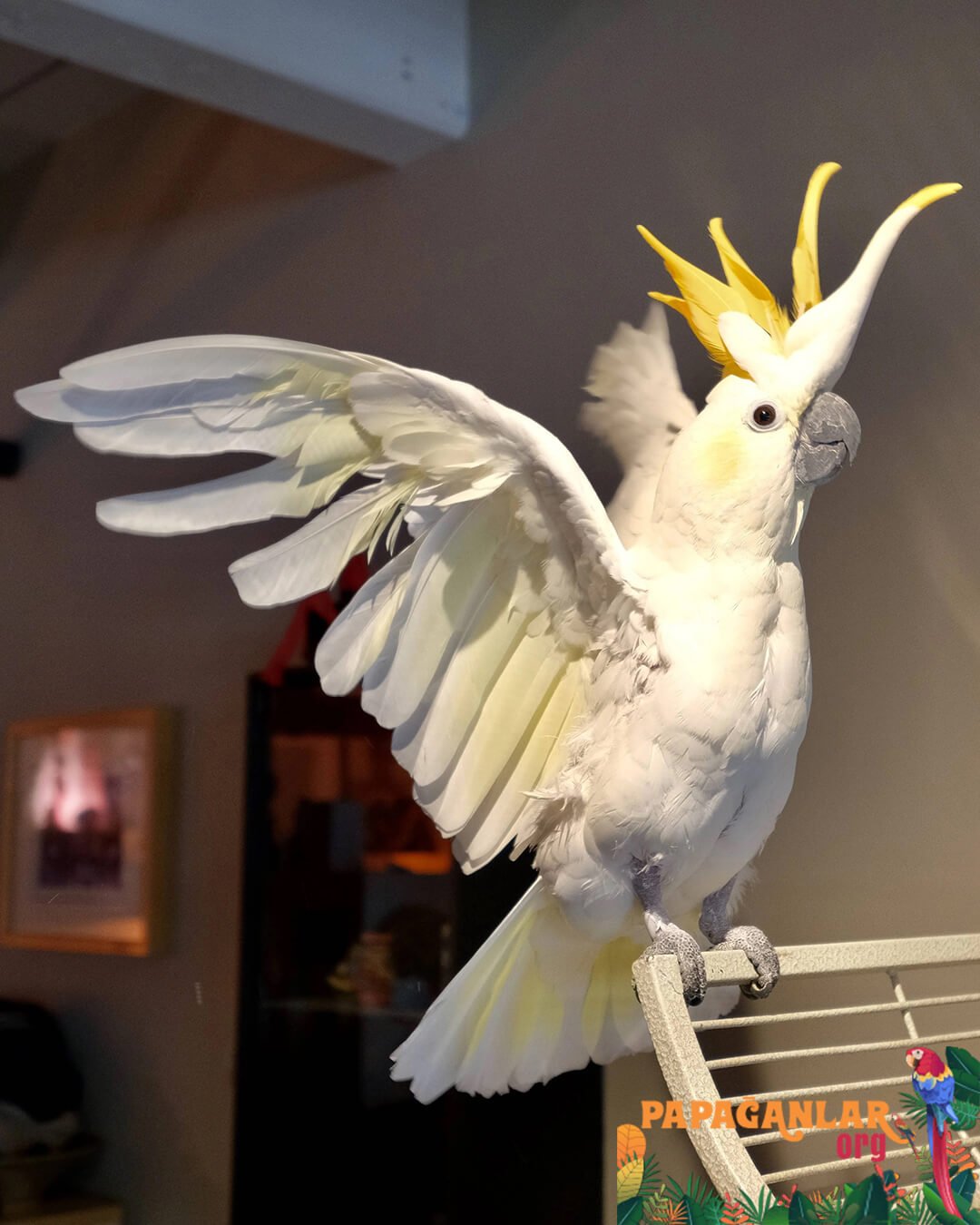 The areas in which they are seen may be different. They live in a wide area from dry savannas to coastlines, or in tropical rainforests. If they are not flying around in flocks, you can see them in groups of 10, jumping from branch to branch on high trees, climbing and playing various games.

Outside the incubation period, they live either in small groups or in large groups of over 100 pairs. Like many parrot species, they belong to the class of creatures that harm the area they live in. Because they do a lot of damage to the crop areas around. 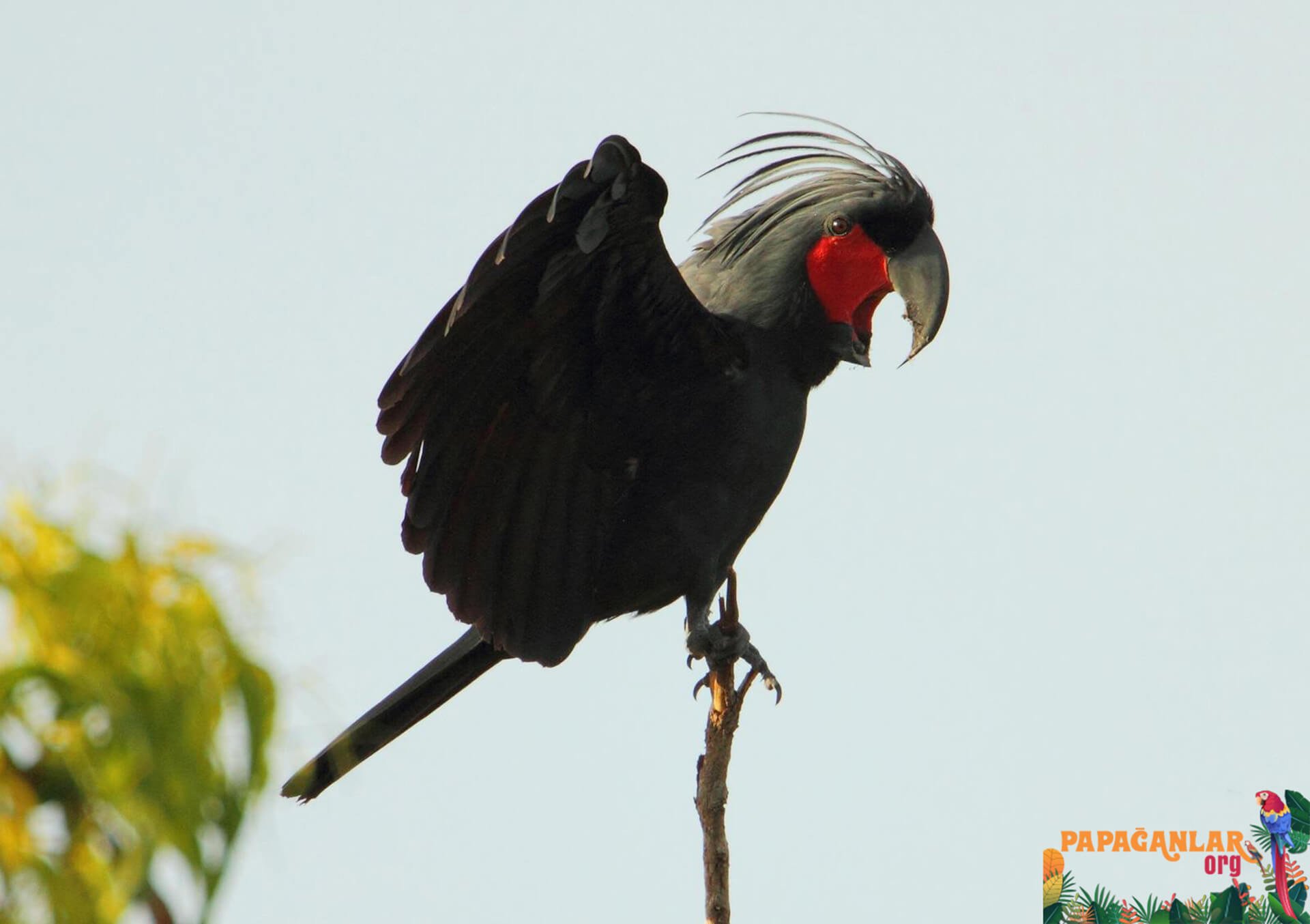 Nutritional Patterns in Their Natural Environments

They mainly feed on fruits and seeds specific to the region they live in. The species called Cacatua tenuirostris consumes plant roots and persimmons in addition to this diet.

Cockatoos have the ability to use one of their feet instead of their hands, as in humans and many parrot species. Cockatoos are also usually left footed. In other words, it can be said that cockatoos are left-handed. 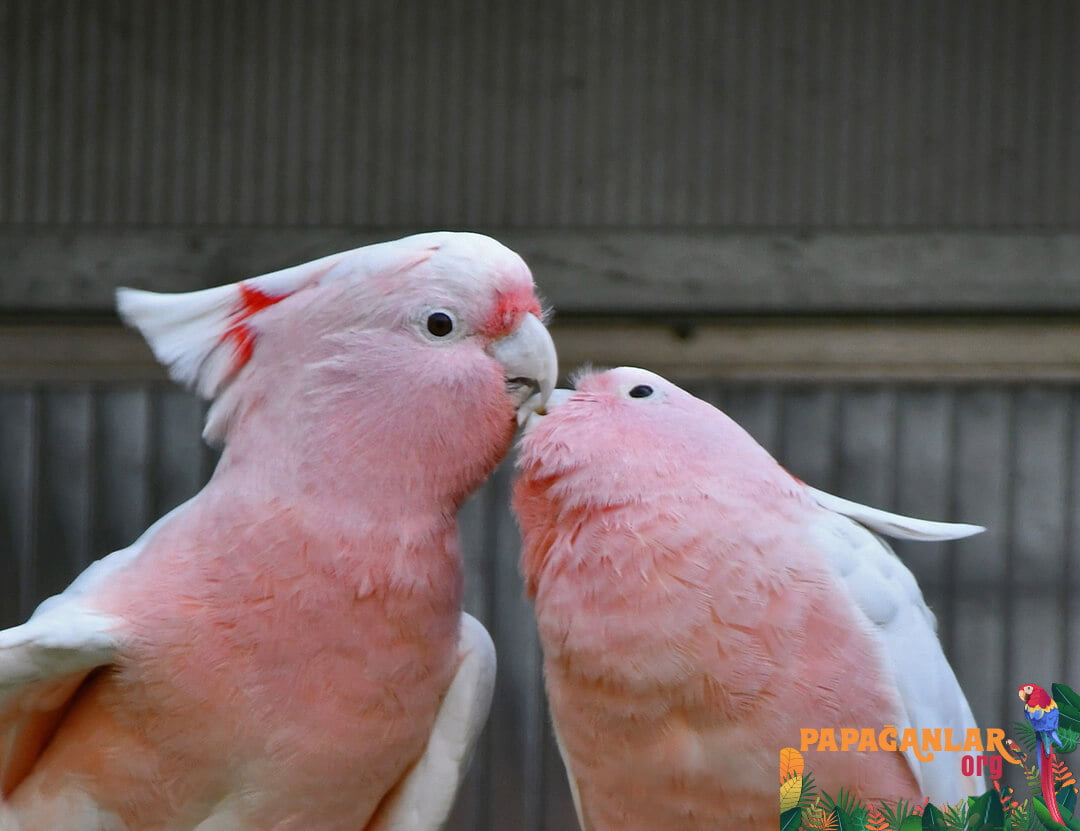 Some cockatoos are extremely playful (such as Eolophus roseicapilla, Cacatua Tenuirostris, Cacatua sanguinea). According to many observers, it is possible to see them sliding on their backs from the slides in playgrounds. They are known to dive and scatter dust clouds in large groups just for fun, dancing and playing on large wind wheels, steel wires or antennae. For this reason, there is an idiom unique to the Australian region: “Playing the galah.”

The Palm cockatoo has the ability to use its own tools. Strike the bark of dead branches vigorously with a grenade-nut or a piece of twig you have adjusted to be used for this purpose. In this way, it creates a sound that can be heard from almost 100 m away. It is thought that the purpose of doing this may be to notify its mate or another species that will enter its territory. Cockatoos are very active parrots that find activities to keep them busy all day.

Many cockatoo species have a loud voice. They express all kinds of wishes and problems by using this voice. Continuous shouting features are available. They skillfully use their voices in different tones. When trained, they also have the ability to memorize words, although not as much as a gray parrot. In addition, they are good imitators parrots that can reproduce the same sounds as the phone, doorbell or any other sound they hear from the environment. 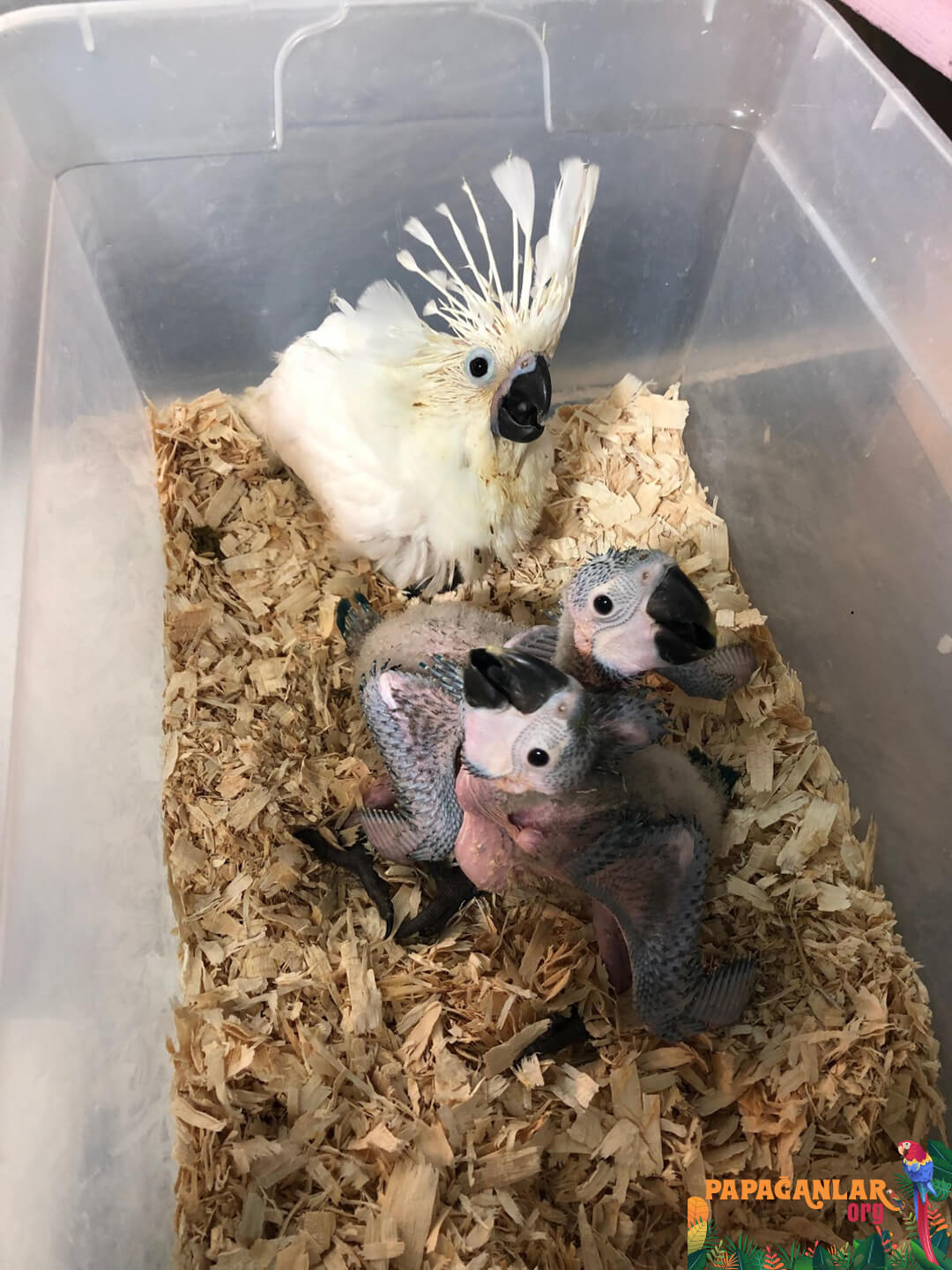 Reproduction in the Natural Environment

It has been noticed in recent studies that cockatoos do not live as monograms like other parrot species. They are more flexible in this regard. They change their mates after 1-2 incubations. These aspects also cause problems such as aggression in males and plucking in females when produced in a cage environment. When the female does not change, males can often injure the female with heavy blows (become aggressive) and even cause her death. In addition, this aggression can go so far as to harm the person who feeds them. Based on this, it cannot be said that it is very suitable for cockatoos to be fed in the home environment. Because it is impossible to offer the opportunities that their natural environment offers them in the nutritional conditions in the home environment.

It is difficult to understand at first when the problems become noticeable after 5-8 years. However, especially when producers raise them in incubators or produce them by hand as “loving family parrots” and sell them all over the world, problems may arise a little earlier.

There are also species of cockatoos, such as the Calyptorhynchus species, where the males do not assist the female in brooding.

Cockatoos also make their nests in high tree hollows. The incubation period, which varies according to the species, is between 18 and 30 days, and the brood care period is between 35 and 120 days, depending on the species.

Caring for a Cockatoo as a Pet

Some cockatoo species fall into the class of parrot species that many people buy and keep. The rule that applies to all living things is a situation that is much more needed in cockatoos. Cockatoos are species that require a lot of attention and care. Therefore, if you do not want to experience some problems, you should think very carefully when buying a cockatoo. If you have a cockatoo and you can’t give it the attention and care it needs in the first place, it will first of all shout constantly throughout the day. You need to be prepared to experience psychological problems that will cause her to injure herself or even die later on.

Once you have accepted all the terms and decided to get a cockatoo as a pet, you will need to consider some points.

The most important of these is feather dust, which is found in many cockatoo parrot species and is due to the different structure of their feathers. They also shed in larger quantities compared to other parrots, which means a constant accumulation of dust and cleaning in and around their environment.

You will also have to worry about your furniture. Because cockatoos, even if their needs are mostly met, will definitely want to gnaw at every object they find at home, especially wood or wood, as they are among the species that tend to gnaw excessively.

Cockatoo parrots love to shout loudly and say “hello and goodbye” to the sun at sunrise and sunset. But it is also useful to be prepared that if she expects attention from you during the day, especially if she is bored, she will make a big noise and will not shut up until she gets what she wants.

They are very active species. For this reason, they want to be in the open during the day and fly. Keeping it permanently confined in a cage is not a recommended shape for cockatoos. It is recommended that they be housed in room type or outdoor keels where the necessary insulation and heat conditions are provided.

One of the features that should be known before buying a Cockatoo is that they are difficult to train.

First of all, decide which type of cockatoo you will buy, research it thoroughly. You can find a lot of information about cockatoo parrot breeds on our website. If it is caught in the wild, this will make your job even more difficult. If you are going to buy such a cockatoo, at least make sure that it is very young or even more puppies.

Those produced by hobbyists, although easier to train, are not very efficient socially. In addition, hand-made productions can cause problems related to their sexuality that cannot be used in production. 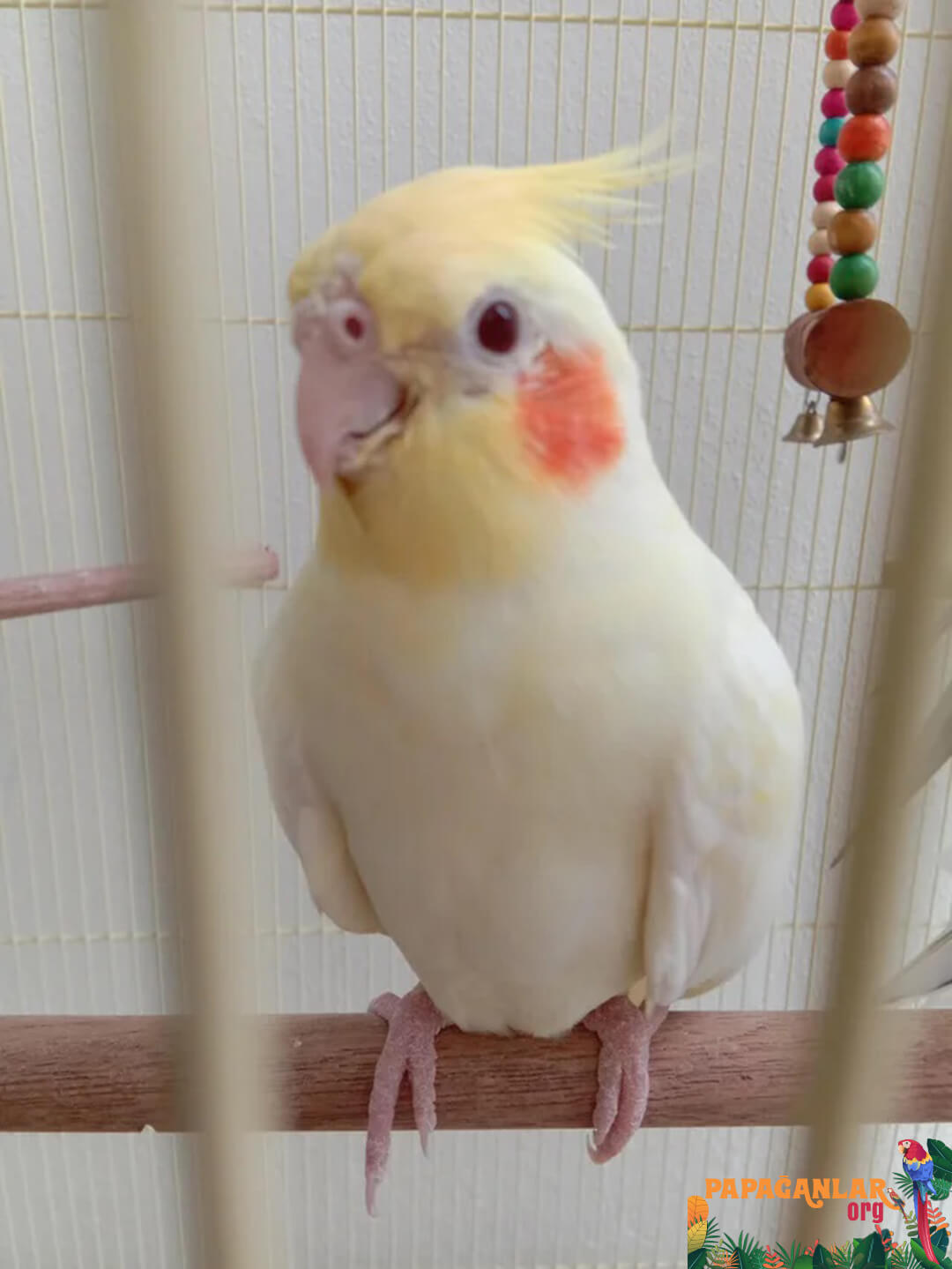 Cockatoo parrots are extremely attached to someone who takes care of and cares for them. It creates a very strong emotional bond with its caregiver. Although this may seem like a nice trait, there is a high probability that cockatoo parrots will develop behavioral problems when situations arise where the individual is not even briefly interested in her for work or any other reason.

The best advice for those who want to feed a cockatoo is to choose a cockatoo that is young (if possible, those who have just come out of the puppies, who are not more than 1 year old) but that has grown up with their own congeners. This type of cockatoo can be tamed without any problems, and is easily attached to a sibling to be taken (or taken with). Easily adopts and learns social behaviors. Psychological problems will be less, so it will be easier for you to take care of.

Cockatoo parrot prices will be shaped depending on the economic conditions in 2023. Undoubtedly, parrot prices are directly affected by...

END_OF_DOCUMENT_TOKEN_TO_BE_REPLACED

For those who want to keep pets at home, parrot varieties have started to come to the fore in recent years, both because the prices are...

END_OF_DOCUMENT_TOKEN_TO_BE_REPLACED

White cockatoo parrots are a white bird species found in the region covering the Solomon Islands in the Malacca Peninsula and Austr...

END_OF_DOCUMENT_TOKEN_TO_BE_REPLACED

Cockatoo Parrot Prices From The Breeder

The Cockatoo Parrot is a bird species liked by many animal lovers. Cockatoo Prices vary between 4000 and 9000 from its owner. Since thi...

END_OF_DOCUMENT_TOKEN_TO_BE_REPLACED

Cockatoo parrot is one of the most loved parrot species by people. This beautiful bird, which has managed to make itself loved due to i...

END_OF_DOCUMENT_TOKEN_TO_BE_REPLACED

Palm Cockatoo Parrot (Probosciger Aterrimus) Birds are the winged creatures of the animal kingdom. These beings came to our homes ...

END_OF_DOCUMENT_TOKEN_TO_BE_REPLACED

What Does a White Cockatoo Eat?

Hello, You can get information from here for all kinds of information about this beautiful sulfur cockatoo parrot bird, what it eats an...

END_OF_DOCUMENT_TOKEN_TO_BE_REPLACED

Cockatoos are large parrots that are native to Australia and the South Pacific Islands. The vast majority are white, and there are blac...

END_OF_DOCUMENT_TOKEN_TO_BE_REPLACED

Clever and Cute White Parrots The white parrot is a bird species with white color found in the region covering the Solomon Islands f...

END_OF_DOCUMENT_TOKEN_TO_BE_REPLACED

Molucan Cockatoo (Cacatua Moluccensis) Parrots come first among the pets we can keep in our homes. In general, we choose from several b...