How to go on vacation with parrots?

Vacation is the time period when we try to relax our souls and minds by getting away from our routine work tempo. However, unfamiliar living conditions, different environments that may be encountered in places where one goes for a holiday, or events that may be involuntarily may cause uneasiness.

When we first start driving, our first camping memories, the first vacation we spent away from our family, starting primary school, the first time we taste a different fruit are hesitant mixed with curiosity. The doubts we feel while drinking the water we get from an unfamiliar source, our careful attitude in first meeting and conversations with people we do not know, the smell, humidity and temperature of the air in the places we stay away from home, and even the difficulty in walking due to the arrangement of things we are not accustomed to in the places we stay are among the emotions we all feel. People get used to environmental changes in a short time due to their developed intellectual comprehension and adaptability. 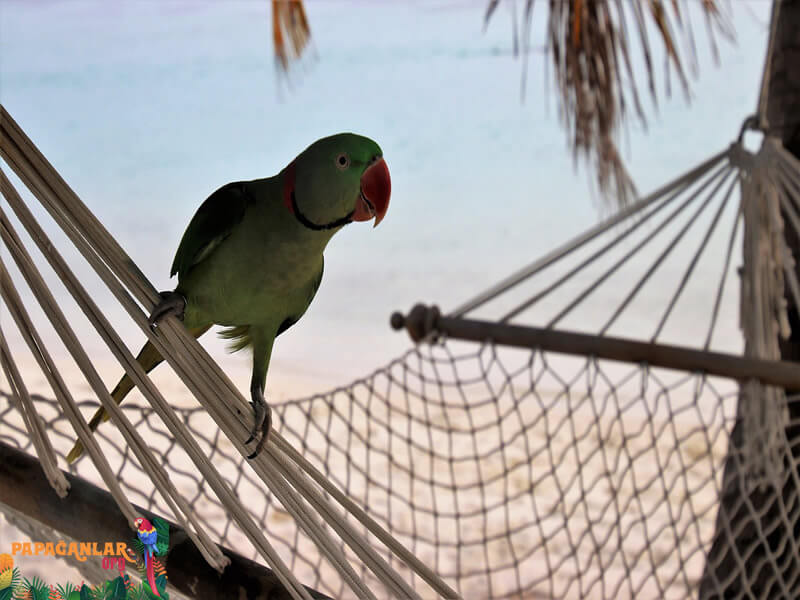 Birds lead their lives mostly by instinctive movements, partly based on their learning abilities. When they are brought to an unfamiliar environment, unfamiliar sound, visual and odor stimuli are a very distressing situation for them. If the owner’s insufficient attention is added to this situation, the parrot feels lonely and trapped in a cage as a vulnerable creature that can be attacked at any time and gets stressed.

The main disorders that develop in birds in this sociological phenomenon called holiday stress:

Measures to be taken against holiday stress:

1-) Precautions to be Taken Before Travel 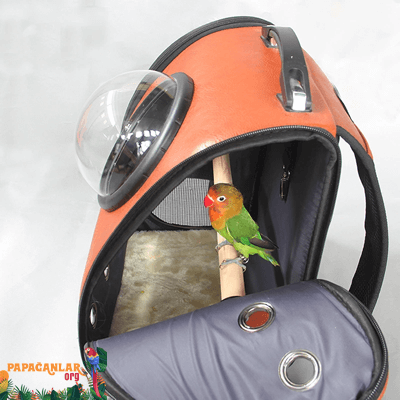 The size of the cage should be decided by taking into account which vehicle (airplane, passenger car or caravan) the trip will take place. The aim is for the parrot to travel without being shaken, afraid, or exposed to extreme variations in ambient temperature.

When purchasing a travel cage, it is important for a peaceful travel that the cage fits comfortably inside the vehicle. The shape of the cage should be such that it is firmly attached to the place where it will be placed in the vehicle. Small parrots can be transported in their old cages, while smaller cages should be used for larger parrots.

When it is decided to use a new cage for travel, the new cage is prepared a few weeks ago and the parrot is accustomed to the cage. For this purpose, toys are left in and on the cage, and the bird is expected to play with them and get used to the cage in this way.

If the parrot is not used to traveling in a vehicle, it should be accustomed to being in it by making short trips a few times before a long trip. It should be noted where the bird likes to stand in the vehicle on these short trips. Some parrots may prefer to see what’s going on around them. Some parrots like to travel on the seat, some on the floor of the vehicle. If you are going to travel internationally by plane, a health report on the parrot may be required.

While traveling by plane, the parrot should be kept tied in a cage to prevent the bird from being harmed during movement.

The cage should not be placed close to the airbag location in the car. Deployment of the airbag may harm the bird. 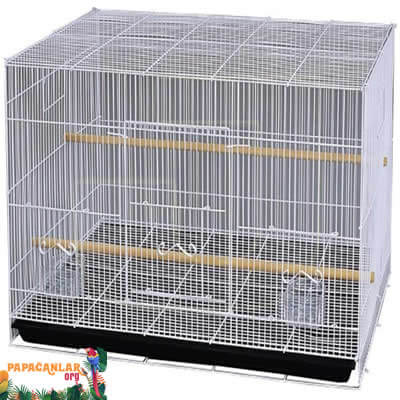 During travel, the diameter of the perches in the cage should be thinner than the old perches. It would be beneficial to add another perch made of rope into the cage. Putting favorite toys in the cage can reduce travel stress. Toys should be light and small in size. The toys should be placed in such a way that they do not shake and hit the parrot during the shaking.

Before the vehicle moves, it must be ensured that the parrot is in the cage.

Excessive radio noise, cigarette smoke, and overheating or operating the air conditioner in the vehicle can cause serious health problems.

Since some parrots may refuse to eat and drink if their feeding and drinking bowls are changed, the bait and drinkers they are accustomed to during travel should be used. It is useful to have the feed and water from the brand that he is used to.

For the parrots who do not or cannot eat and drink during the travel, and cannot defecate, take a break in accordance with the feeding times they are accustomed to. It is ensured that the parrot feeds, drinks water and relaxes by taking it out of the cage.

The cage should be covered during the sleeping hours it is used to.

It is useful to leave the windows slightly ajar and to have the glass tinted, as it will be dangerous for the parrotto remain closed in the vehicle during the hot seasons.

Since the tinted glass will prevent foreign people outside the vehicle from seeing the parrot, the stress that may arise due to the interest of foreigners is prevented.

Since some birds do not like the darkening of the air, efforts should be made to complete the journey during daylight hours.

When the owner of the parrotis stressed, the parrot will also be stressed, so you should try to be as calm as possible while traveling.

You should have the bird’s veterinarian’s phone number ready with you.

3-) At the Holiday Place

If the holiday is to be spent at the hotel, the hotel manager should be informed in advance that he or she will come with the parrot.

If camping is going to be done, the camp area should be reached earlier than other campers to help the parrot get used to the area.

The parrot should always be under surveillance, and the need for rest of 10-12 hours per day should be provided by covering it.

Plants such as mistletoe and holly will cause toxication in parrots, lamps used for decoration will cause burns and ingested decorative substances will cause problems in the digestive system. should be avoided.

Since contact with chocolate, sugary cakes, salty cookies and alcoholic beverages, which people consume more in holiday environments, will adversely affect the health of the parrot, these foods should not be given to parrots.

Parrots should be avoided in such environments as perfumes, dried scented flowers, adhesives, cleaning products, Teflon materials, fumes from burning fireplaces and barbecues can be toxic. 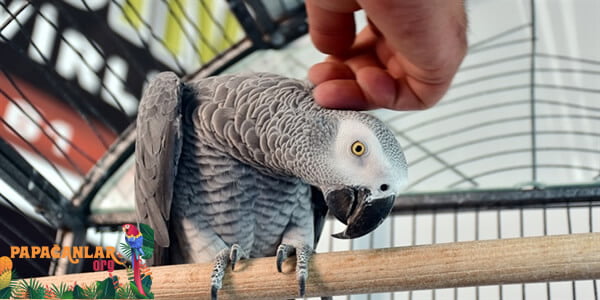 Parrotsshould be kept away from ornamental tapes, inked papers, and metals attached to the cage.

Since the arrival of guests with a dog will cause the parrot to be uneasy, contact with the dog should be avoided.

When allowed to leave the cage, precautions should be taken to prevent the surrounding materials and other creatures from harming the parrot.

Birds should be kept away from crowded environments, as the coming and going of strangers to the house will cause the bird to hear unfamiliar sounds, see images and be afraid when approached.

In order for the birds not to feel abandoned or separated from the people who take care of them, care should not be neglected and adequate care and feeding should be maintained. 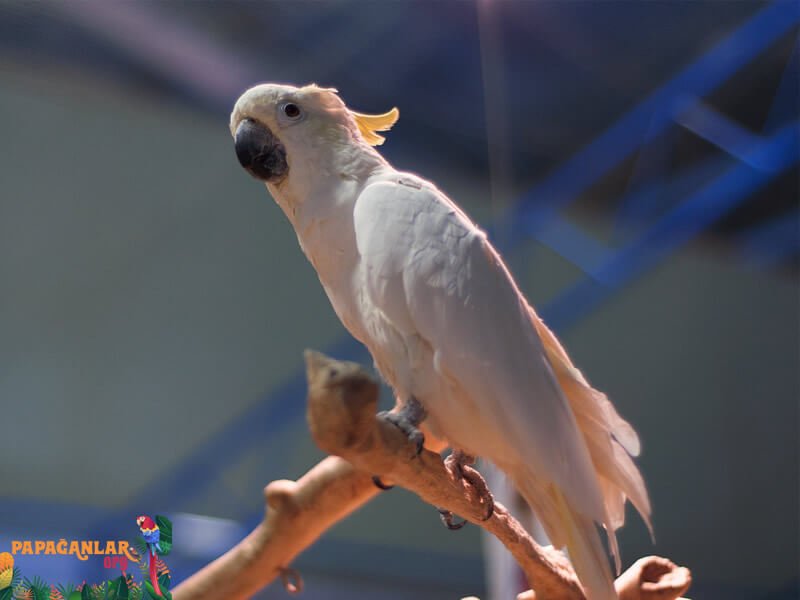 The following practices can be done to relieve holiday stress: