The skin consists of three parts, the outer, middle and inner layers. Parrot skin, which has a flexible structure, is in the form of a thin layer that provides the integrity of the body. It does not contain oil glands, it protects the body from water and harmful microbes with the layer it forms. It helps the body to communicate with the environment. Some of the harmful substances for the body, which are formed by the work of the lungs, liver, kidneys and intestinal system, are also excreted through the skin.

Feathers take part in the realization of the function of flight. It creates a barrier to prevent the contact of water with the skin. It plays a protective role against temperature changes. It also provides the warmth necessary for the development of the egg and the protection of the fry against the cold. The main ingredient that makes up the feather is keratin, which is a protein. During the growth period, the feathers are fed with blood delivered through a vein until they become a thick feather. This adult feather is devoid of blood vessels, extremely robust and durable, but not vigorous. Therefore, in case of any injury, it cannot be repaired because there is no living tissue. It is renewed at the next molt period. 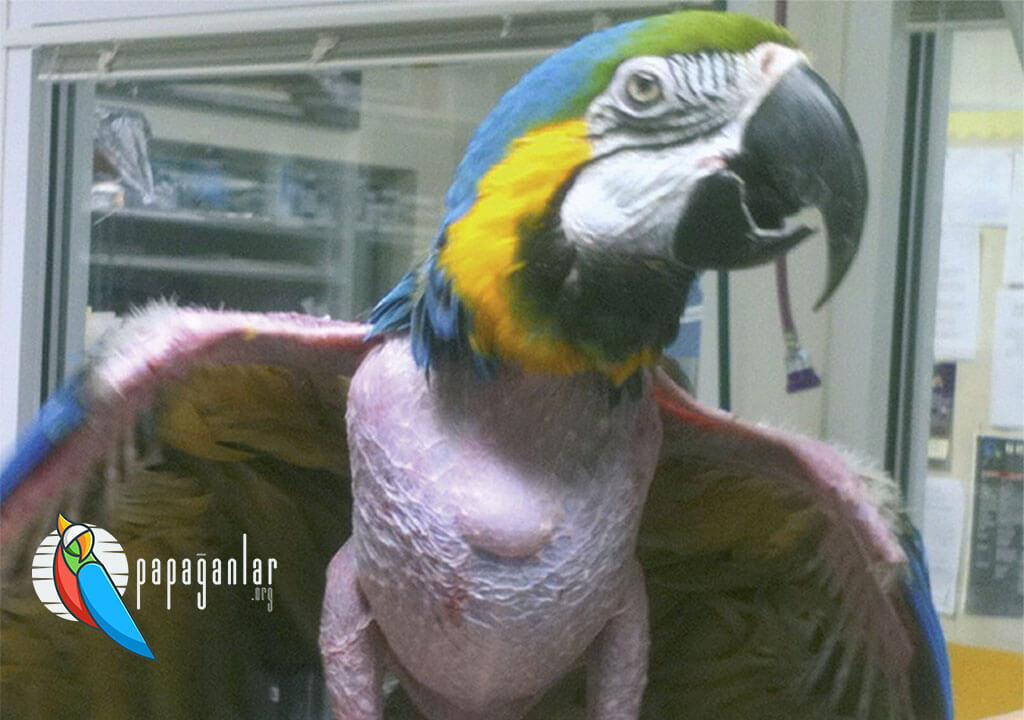 Swelling, redness, bleeding, thickening, abscess, wound and mass formation can be seen on the skin. If enough attention is not paid to the cleanliness of the cage floor or perches, infection-related wounds and inflammation occur on the foot skin. In addition, cold and wet ground also prepares the ground for inflammation of the skin. Since the blood supply is low, especially in the chest area, skin ulcers occur in this area due to long-term pressure. Improper roosts cause foot ulcers.

The main causes of skin lesions in parrots are; malnutrition, trauma, vitamin A deficiency and bacterial infections. Giardia parasite infection in cockatiels and budgies can also cause skin lesions.

Subcutaneous swellings; It is seen due to tumor, blistering, insect bite, skin tuberculosis, bacterial infection, foreign body, bone fracture. It can also occur when the infection is mixed with the blood with vitamin E and selenium deficiency.

In the diagnosis of skin lesions, the eating habits of the parrot are examined. In Giardia infection, motile forms of the parasite in the stool can be seen under the microscope. By taking a sample from the wound or microscopic analyzes of the inflammation, the infectious agent is identified and the appropriate treatment is started. In malnutrition, the diet is rearranged. Necessary minerals and vitamins are supplemented externally. Appropriate antibiotics are given in bacterial infection. The sebaceous glands disappear with the correction of the diet. 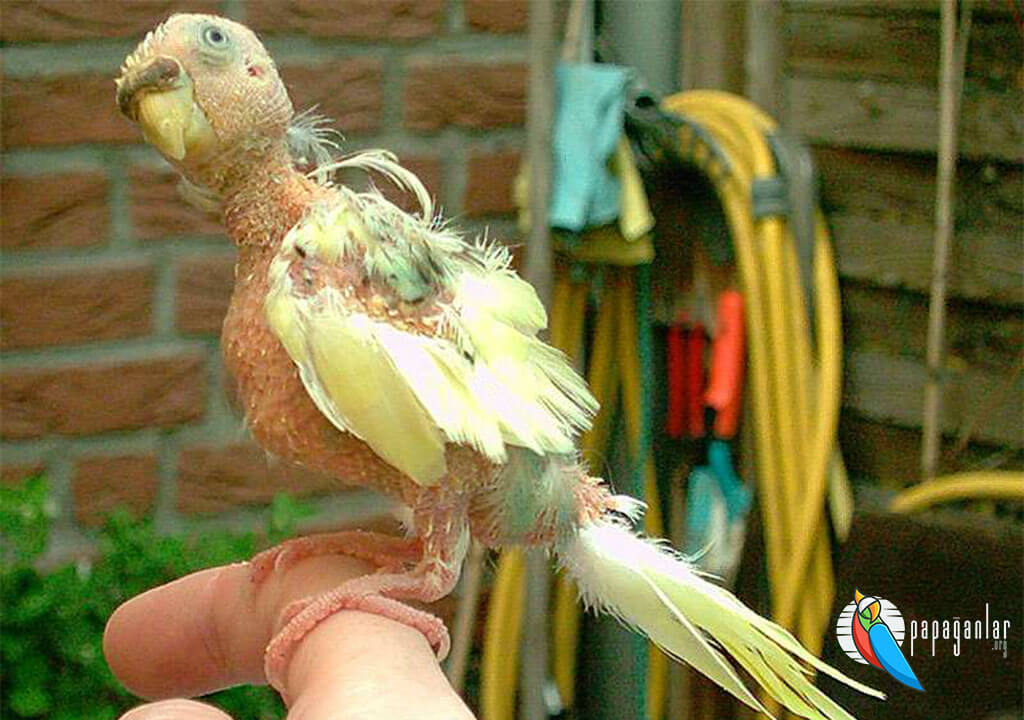 Birds change their feathers 2-3 times a year. The change is under the control of light and hormone balance. In the new moulting period, birds want to make it easier to exit with their beaks. The hair that comes out of a sheath pushes the dead tissue out of the surface where it comes into contact with the skin. The increase in white powder on the skin during this period is considered normal.

The vascular part of the newly emerging hair is dark in color. Shape, color and structure defects, fractures, stress lines in the form of transparent or dark marks are the most common hair abnormalities. 90% of them are due to malnutrition.

The feathers of parrots that are not well fed are pale in color. It breaks easily, does not change hair or sheds unevenly. The low protein content of the foods taken leads to hair loss due to the deficiency of this substance, which is the building block of the cell.

In the absence of various elements and minerals in the diet, easy breakage and curling occur. Color abnormality is seen in malnutrition and liver diseases. Especially amazon parrots and ara parrot have abnormal yellow feathering due to these reasons.

Bleeding, needle-shaped feathers are more common on the wings. It occurs due to trauma or in PBFD disease. If the hair is forced against the bone to pull it off in abnormal situations, the canar bone can break. 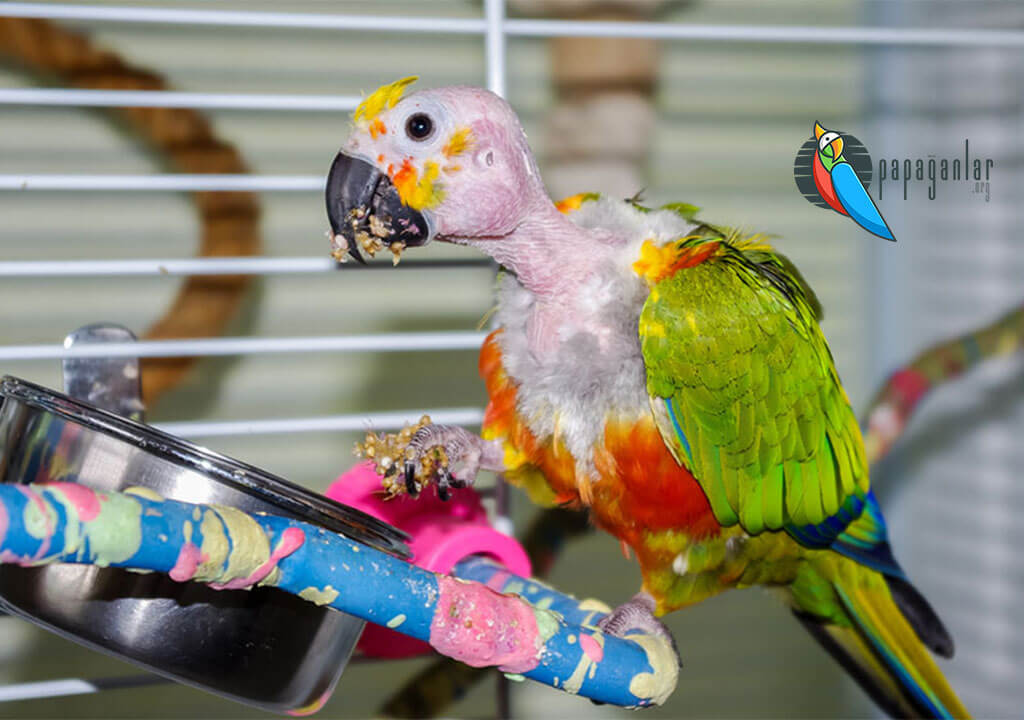 In developmental deficiencies, it is seen that some areas that should be hairy are bare. In tissue healing as a result of injury, hair does not grow in that area. In eye inflammation, the eye area where the inflammation flows remains hairless. Especially in arachnids, the area in contact with allergens is hairless.

If hair loss is accompanied by obesity and sebaceous glands, thyroid hormone deficiency comes to mind. Often there is a shedding in the head area without crusting. It is mostly seen in amazon parrots and budgies.

In French moult, which is more common in budgerigars and lovebirds, irreversible shedding of wing and tail feathers occurs.

Especially, white colored cockatiels have hairless areas on their heads depending on genetic factors. No feathers will emerge from this region in the future. 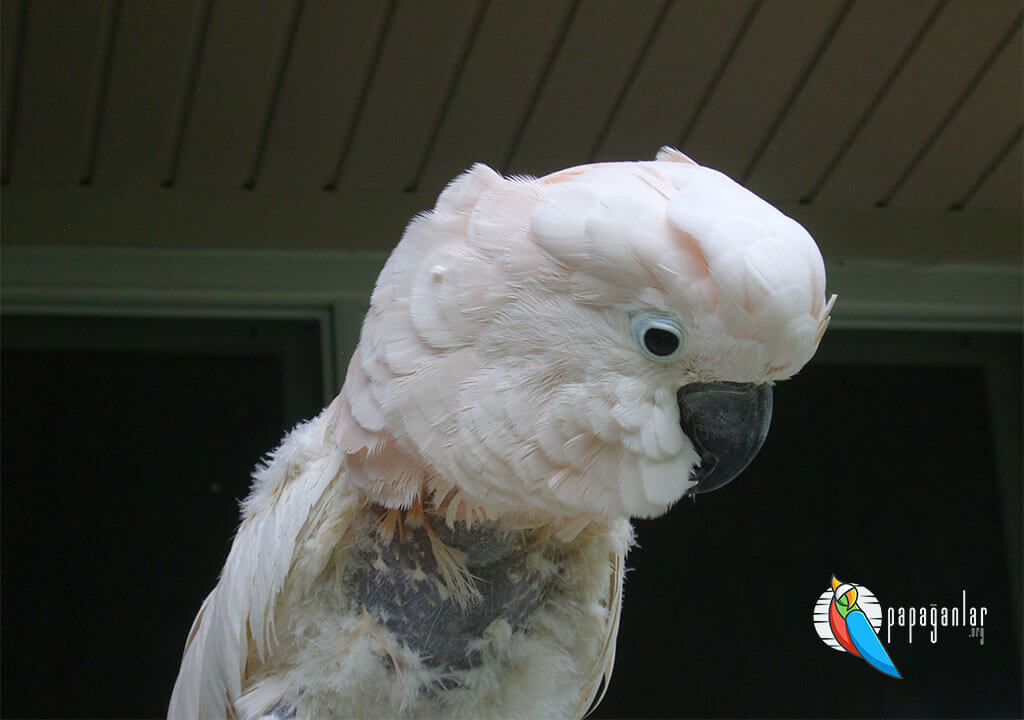 It is an infection caused by viruses, to which only parrots are susceptible, but not in other birds and mammals. Cockatoo parrots are most commonly affected. Lori parrots, lovebirds and budgies also appear. Although it can be affected at any age, it is most common in young parrots. The active ingredient is found in crop, fluff and feces. It can survive for months in infected environments. Affected parrots begin to spread the disease long before they show signs of illness. The infection, which can be transmitted from the egg to the offspring, which is transmitted by mouth and air, starts from the digestive system, passes to the liver and other organs and spreads to the whole body. It holds the top layer of the skin as the target organ. The disease is characterized by hair loss, deformity of feathers and beak, abnormal elongation and softening. Progressive disorders (bleeding, breaking, discoloration) are observed in the hair.

Added infections are the cause of death. All kinds of infections due to a decrease in body resistance can be added to the event. Inflammation of the liver in cockatoos worsens the general condition. In some parrots, sudden death is observed as a result of the rapid progression of the disease before feather symptoms appear. Most affected parrots are under 2 years old.

A vaccine has been developed to prevent transmission of the disease. Vaccination to sick parrots has no meaning in terms of treatment. It is done to healthy parrots, preventing the transmission of the disease. The age at vaccination is very important for the vaccine to be effective. Vaccination can be done from 14 days to 1 year old. A booster dose is given 1 month after the vaccine. Until the age of 3, the protection of the vaccine is investigated by testing every 6 months.

There is no effective treatment for the disease. It usually results in death. The affected parrot is separated from the others. It fights secondary infections by improving its general condition. The cage and the room are cleaned with disinfectants and the factor is tried to be removed. 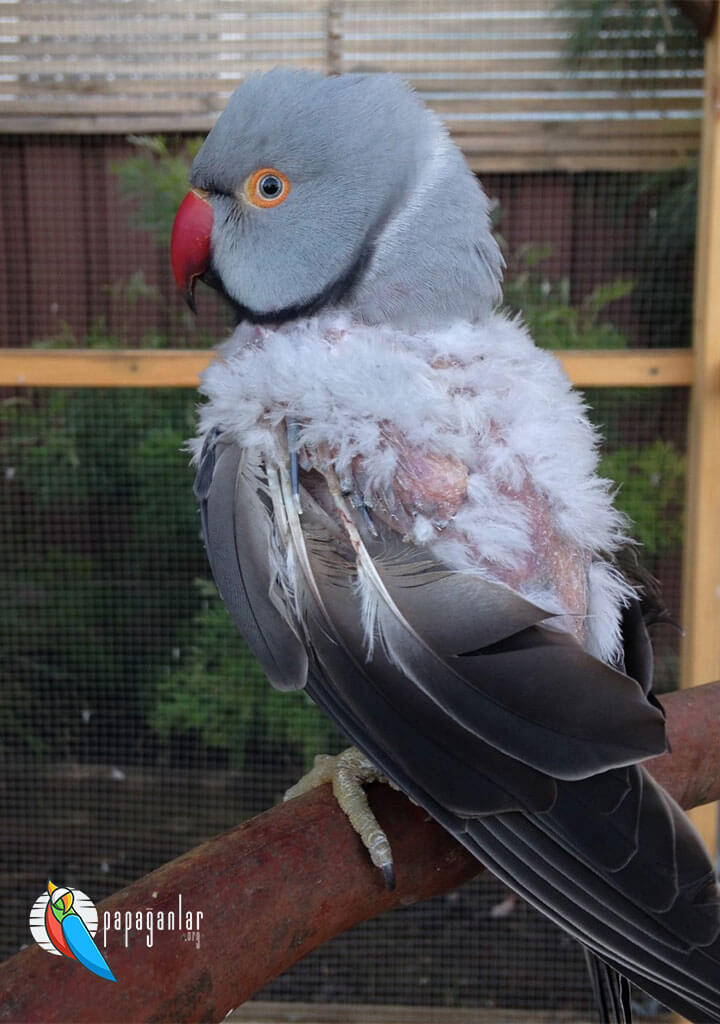 It is a viral infection that mostly affects puppies. It is often seen in budgies. Disorders in the flight and tail feathers of the newly feathered pup should be considered. There are two types of the disease, acute and chronic. The chronic form is more common. While the acute form is more lethal, mild attitude and improvement are observed in the chronic form.

French moult is transmitted by contact with the feathers or droppings of affected birds. Transition from egg to offspring has also been detected in budgerigars.

It should be considered in cases of unexplained bruising and bleeding in puppies, as well as in case of abnormal hair growth. There are laboratory tests to make the diagnosis. There is no specific treatment method. With supportive treatment, the general condition of the affected bird is tried to be improved. Particularly, success has been achieved with supportive treatment that strengthens the body defense system.

A vaccine has been developed to prevent transmission of the disease. Vaccine studies continue. In order to minimize contamination, general hygiene rules should be observed. It should be kept in mind that it is transmitted through the air. 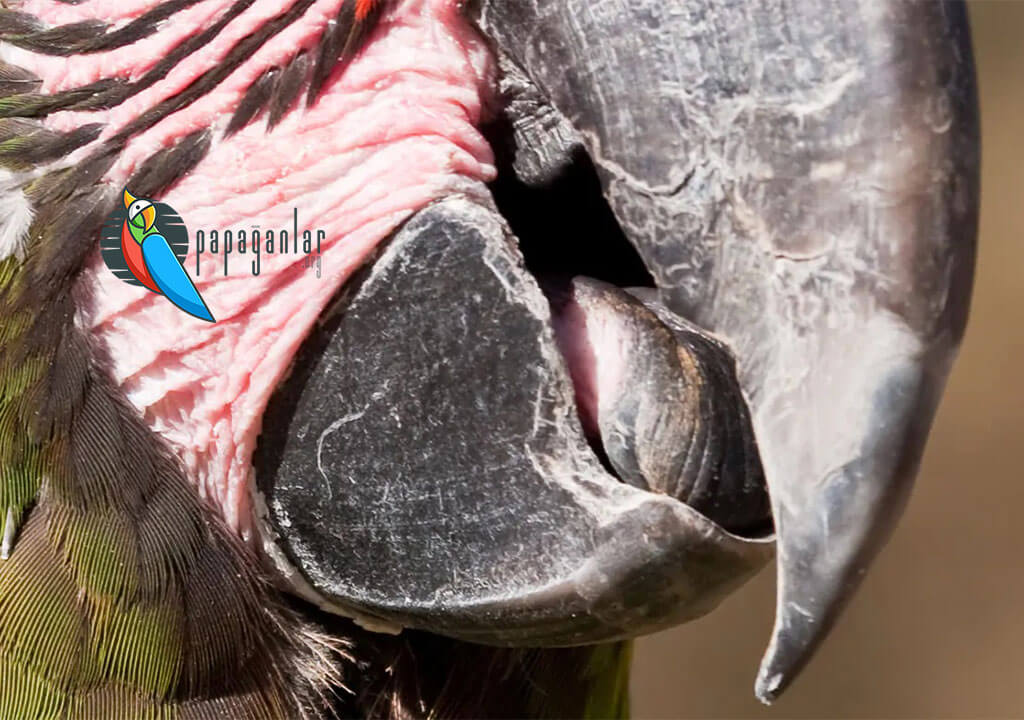 Excessive elongation of the upper and lower beaks, scissor beak, short upper beak, swelling in the beak, softening and bleeding disorders are the main ones. It is most commonly caused by bacterial, parasitic and viral infections, PBFD, liver disease, trauma, maldevelopment, and cigarette smoke allergy. Deformity is observed in calcium and vitamin D deficiencies. In case of deficiencies in vitamins A and B and protein, dry thin layers form on the beak. Excessive elongation and scissor beak; It occurs in hard body chewing, growth retardation and liver disease.

Blood tests are used for diagnosis. Parasite and pathology examinations can be made by taking scraping samples.

In treatment, substances thought to be deficient in the body are added to the diet. It can be corrected in a way that does not cause bleeding and pain in the beak. A file or nail clipper is used for this. The glossy surface of the beak is not touched. Instead of beak, treatment is given to the agent in infections. Parrots should be given tree branches, mineral and energy blocks regularly to keep their beaks straight. If you don’t, especially large parrots will try to meet their needs by gnawing their wooden roosts.

END_OF_DOCUMENT_TOKEN_TO_BE_REPLACED

Why Does a Budgie Die?

Budgerigars, which are preferred by people with their small structures and singing in one corner of the houses, have a sensitive struct...

END_OF_DOCUMENT_TOKEN_TO_BE_REPLACED

Why Does a Budgie Vomit?

Budgerigars have an elegant, slender body. They don't like to be over-handled. The reason for this is that people seem to be afraid to ...