Although there is always harmony between living things, it is a matter of curiosity whether the cat and the parrot are fed in the same environment. It is possible for a cat and a parrot to be fed and cared for in the same house. However, their cages must be separate, their maintenance must be separate.

In addition to all these, it is an important detail to take the parrot into the house first. Because cats may instinctively attack the parrot due to their hunting needs.

In order for the cat not to attack the parrot, the parrot must be in the house beforehand. Thus, the cat perceives the parrot as a part and individual of the house. As a result, it moves away from its aggressive attitude and becomes in harmony with the parrot. 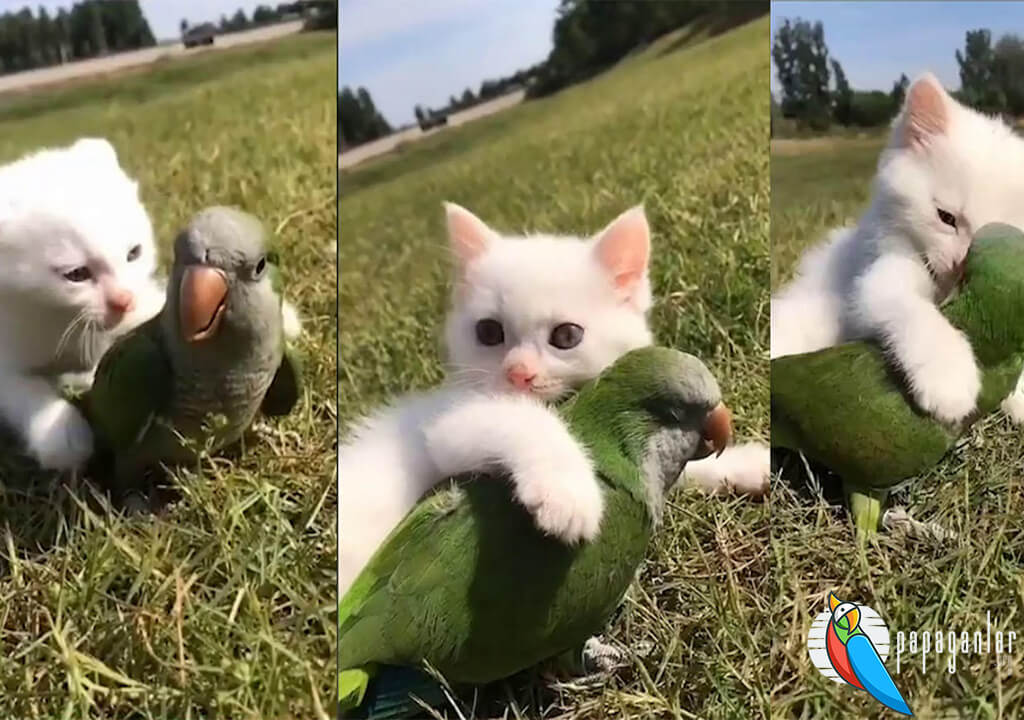 Do Cats and Parrots Get Along?

Cats and parrots are not the same breed. Therefore, their maintenance and structure are also different. Also, do cats and parrots get along? The cat and the parrot agree. However, in order to achieve this, every detail must be considered in detail. Otherwise, the hunting aspect of the cats comes to the fore and it is not possible to get along.

As a result, the cat can harm the parrot. In order not to experience this situation, cats should be taken home as kittens. Thus, the cat adopts the parrot and sees it as a family member. In addition to these, cats and parrots are animals with high perception power.

While parrot sounds are imitated, cats are known for their ability to understand and comprehend what is being said. Therefore, if they get used to each other and get along, they become compatible pets. 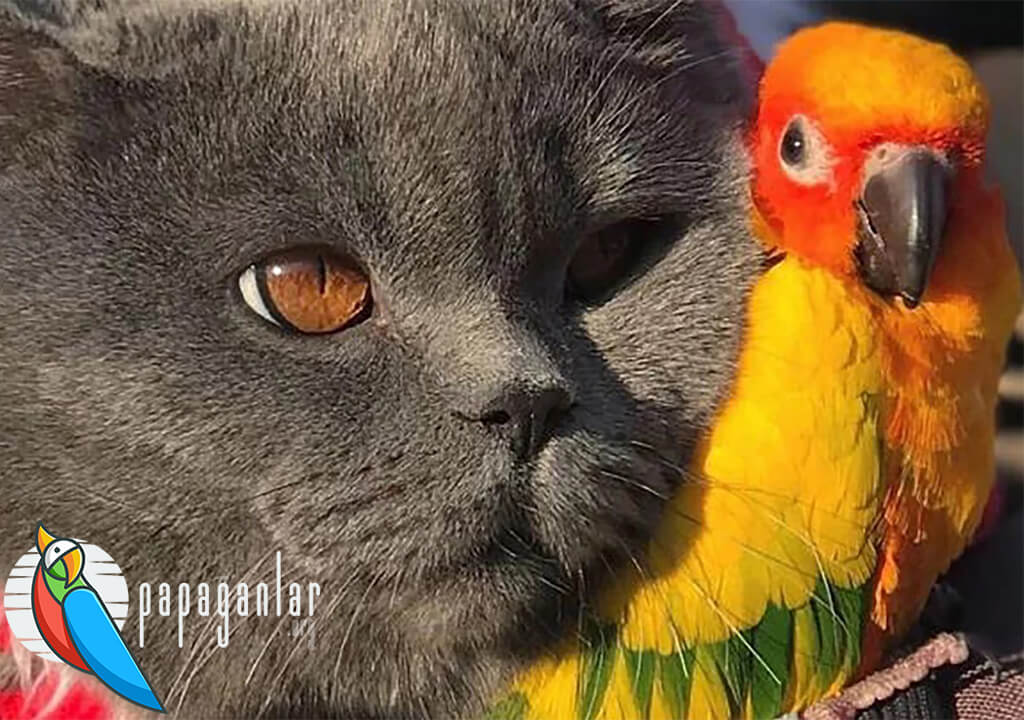 The Cat and the Parrot Tale

Once upon a time, a cheerful parrot lived in a house. This parrot loves his family members very much and repeats everything they say. However, since the owner loves animals very much, he also decided to buy a cat. However, she was hesitant about whether the cat and the parrot would get along. After all, they got a kitten. They named him Pamuk.

Pamuk was so small that she was only born a few days ago. Pamuk attracted a lot of attention from the homeowners. Eating, drinking and caring for. They bought a special cage. Meanwhile, Minnak, the beautiful parrot, was watching them. At first, she was very uncomfortable with the presence of the cat.

However, over time, Pamuk’s movements and fun jumps also pleased her. Pamuk did not find Minnak strange. She saw her as a child of the family and never saw her as a bait. They lived their lives happily for many years. 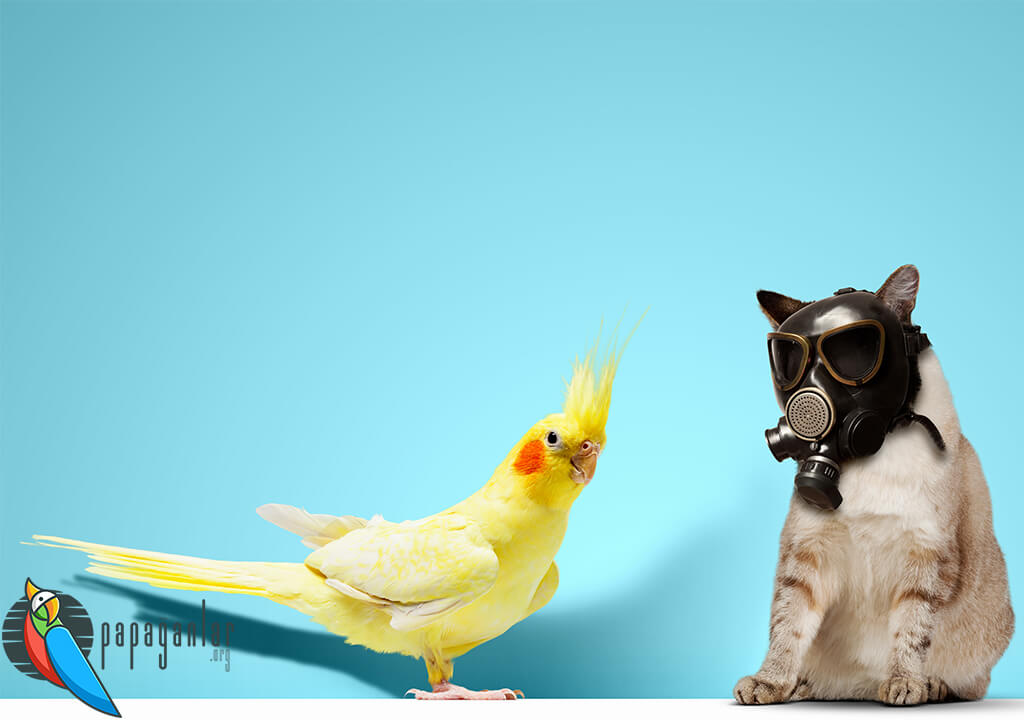 The cockatiel parrot, which is one of the parrot group, is a creature that attracts attention with its appearance and intelligence. It is very suitable for feeding at home and becomes a source of joy for homes. However, the question of whether it is okay if I want to look at the cat and the cockatiel together occupies the minds.

Cats are an instinctive creature known for hunting birds. Birds, on the other hand, are defenseless creatures that cannot protect themselves too much against cats. Therefore, the cockatiel and the cat should not be alone in the same environment.

When I am not at home, the cat and the cockatiel should stay in separate rooms with the doors closed. When I take the cockatiel out of the cage inside the house, the cat must be under surveillance.

Otherwise, it may attack. Although it does not act with the instinct of attack, it can harm the cockatiel while playing. It is also useful to consider these risks. 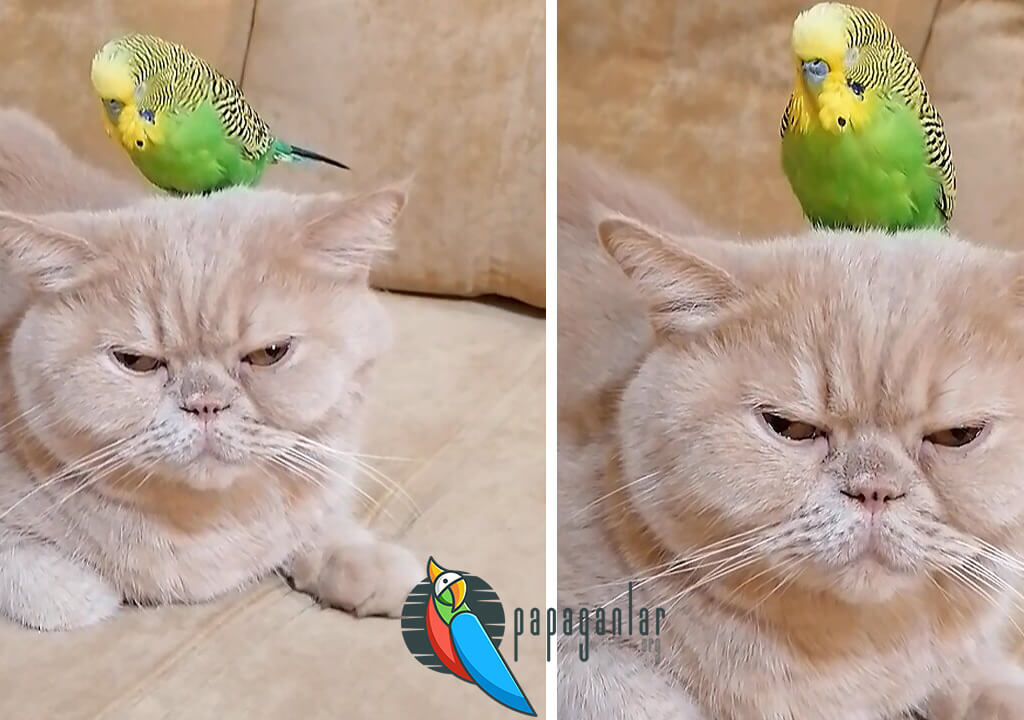 There may be those who want to feed a variety of pets at home. Budgerigars are cute creatures that increase the energy of homes. However, troubles may arise if a cat and a budgieare found together at home.

The budgerigar should not be in the environment where the cat is too much. It is especially dangerous to leave two living things alone.

With its delicate and graceful nature, the budgerigar cannot resist the cat. As a result, its life as bait ends. Necessary measures should be taken to prevent this situation from occurring. Even if the cat has come home very small, it can attack the budgie as it grows. It falls to the individuals who feed the living things to protect it. 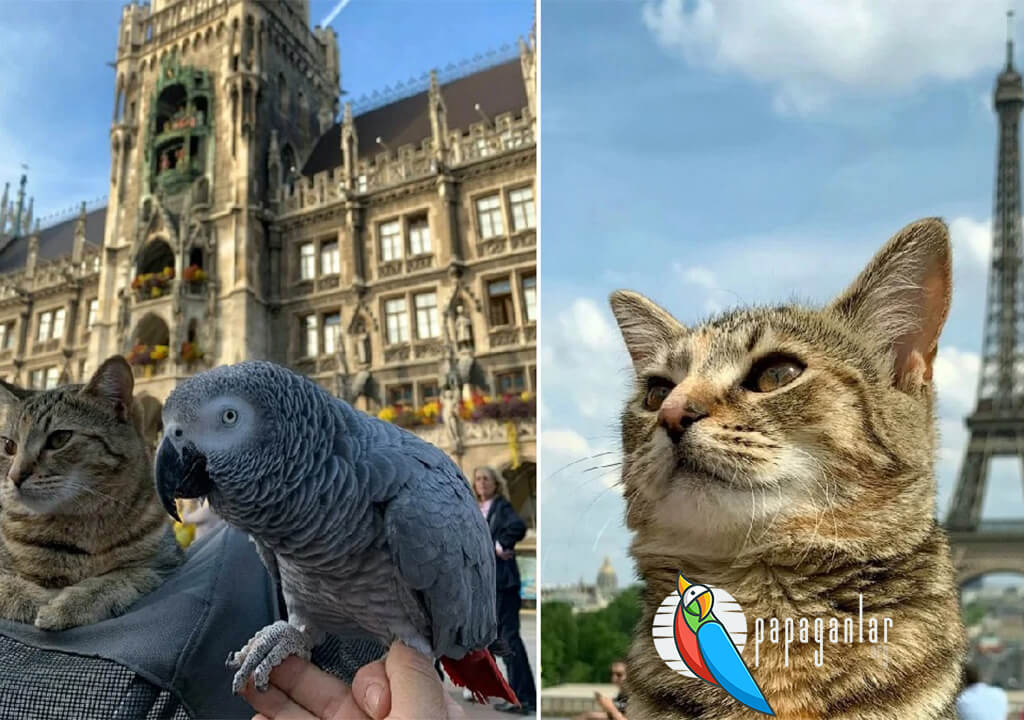 How Can I Train My Cat to Bird?

The home environment is suitable for living creatures. However, it is difficult for animals to live together in the same environment or it will happen over time. Also, everyone who is thinking about how to get my cat used to the bird starts to research this subject.

It is possible for the cat to get used to the bird if it is brought to the bird environment in this way. However, care should be taken that the cages of the bird and the cat are not open at the same time. Cats always have an instinctive desire to eat. This causes the bird to end its life. 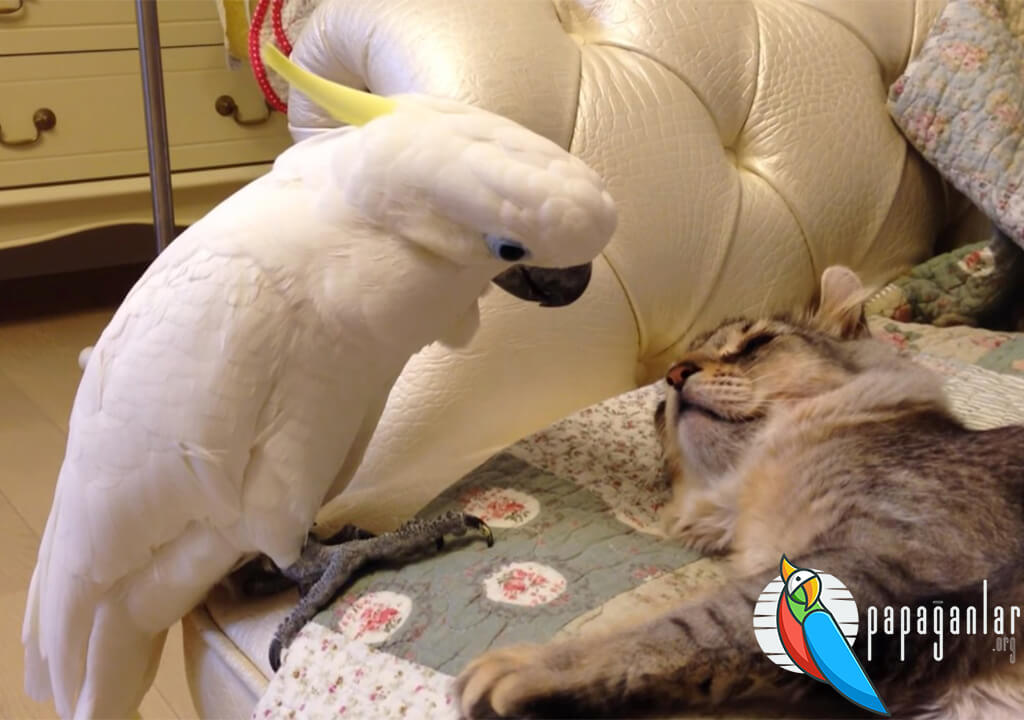 Can Parrots and Cats Be Keeped in the Same House?

Because even if they do not harm each other, it is not clear what will happen at any moment. It is useful to pay attention to this issue in order not to encounter sad consequences. 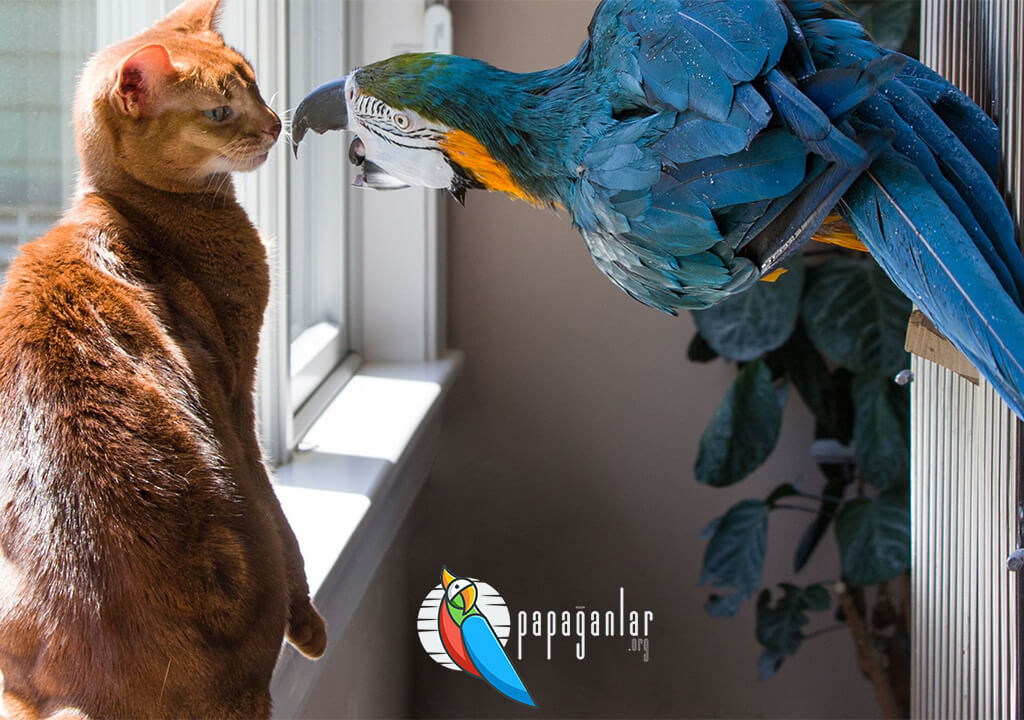 My Cat Is Attacking My Bird What Should I Do?

Everyone knows that birds are prey for cats. So how logical would it be to keep both of them at home as pets? Most people go into research by saying, “My cat is attacking my bird, what should I do?” Where the cat and the bird stay in the same house, the cat’s cage should be in a separate room from the bird’s cage.

When the bird’s cage is open, you should never take your eyes off it and bring the cat to where the bird is. No matter how well they get along, you should not let go of your guard. You can also use the method of punishing the cat in case of a possible attack. This will be a deterrent. 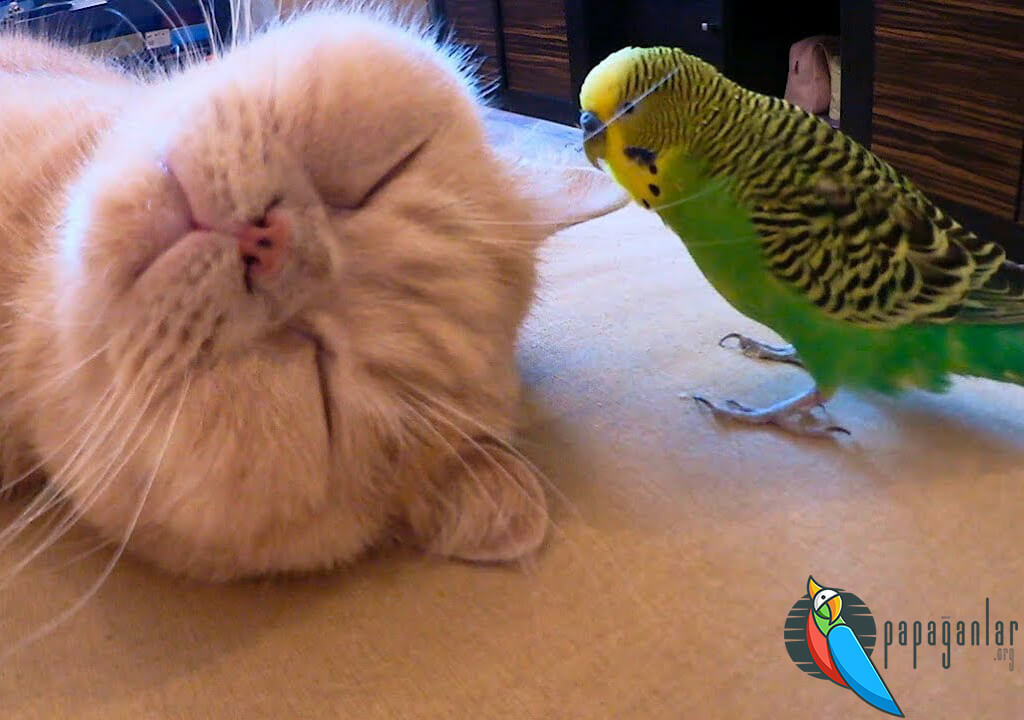 Getting the Kitten Used to the Budgie

Today, living things known as hostile to each other can be fed in the same house. For example, you can create a beautiful environment by accustoming the kitten to the budgerigar.

If you have a budgie before your kitten, your cat will get used to your bird. Because she sees her as a family member and this prevents her from taking the offensive position. 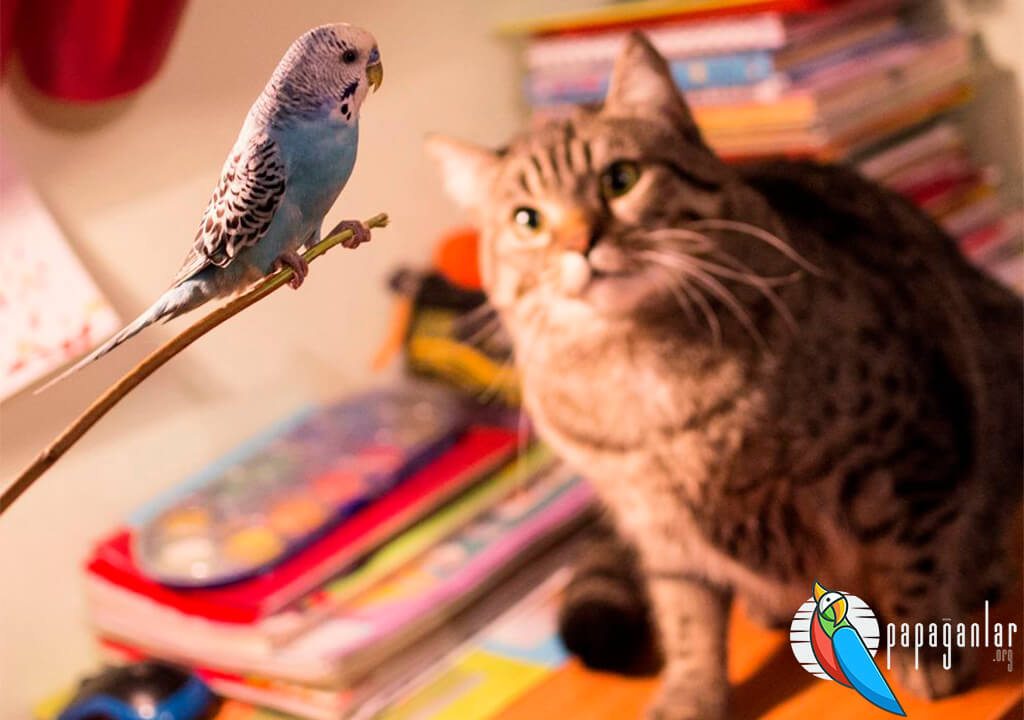 Why Do Cats Kill Birds?

Birds have a living system in which they eat cats. That’s why cats kill birds. In this context; Someone who studies why cats kill birds sees birds as the most basic food for cats. In order to feed herself and continue her life, she has to hunt and eat birds.

Because this is how they exist, cats kill and eat birds. Although their diet is complete and regular, cats are by nature aggressive and hunted creatures. Therefore, it is unpredictable what they will do when. In this sense, it is of great importance that the owners act with due care. 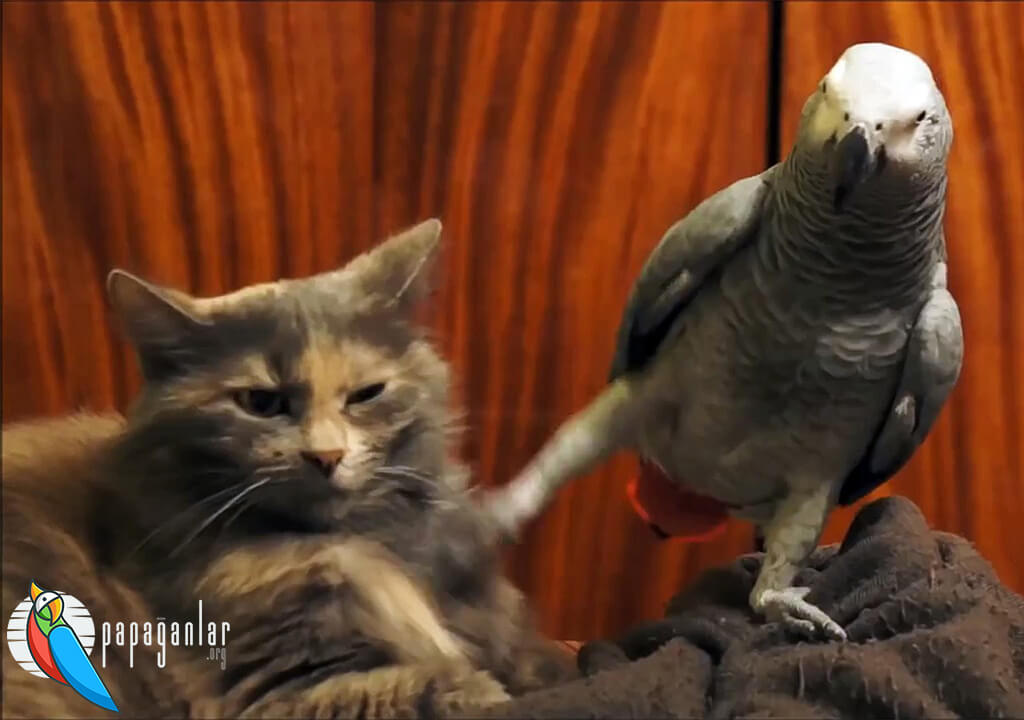 Feeding a Cat and a Bird Together at Home

Cats and birds are cute creatures. However, keeping a cat and a bird together at home is always a difficult task. It is important to constantly monitor them and to offer attention and care equally to both. If you have a cat at home, it is not recommended to buy and feed the bird later.

It would be a wiser choice if you want to feed a cat while feeding a bird. Because cats stay away from attacking the bird they see as a family member. But here, too, it is important that the cat is a newborn. Wanting to keep a big cat at home poses a danger in the presence of the bird. 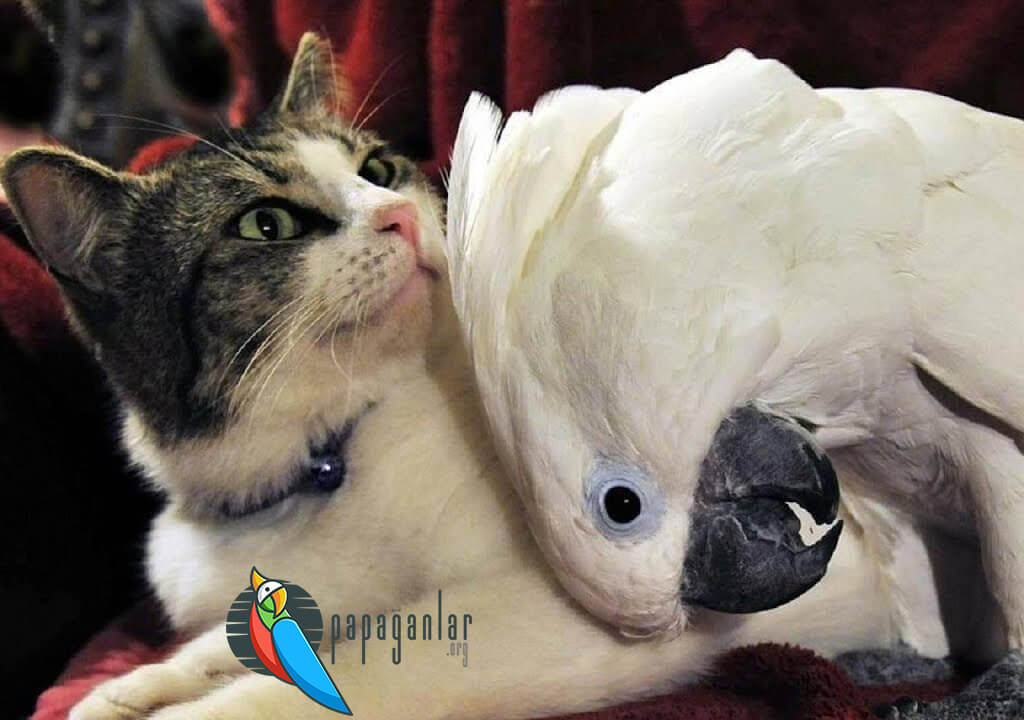 How to Feed a Bird and a Cat at the Same Time at Home?

Feeding birds and cats is one of people’s favorite activities. People who like to share the same environment with living things want to keep different animal species at home. Also, how to feed a bird and a cat at the same time at home? At this point, there are points to be considered.

Although it is thought that they do not seem to be dangerous, it is necessary not to endanger the bird. Cats may instinctively begin to attack and switch to hunting. In addition to these, it is an important detail that the bird does not stay in the same room in the cage when the cat’s cage is open. Because it can attack the bird and kill it in its cage. 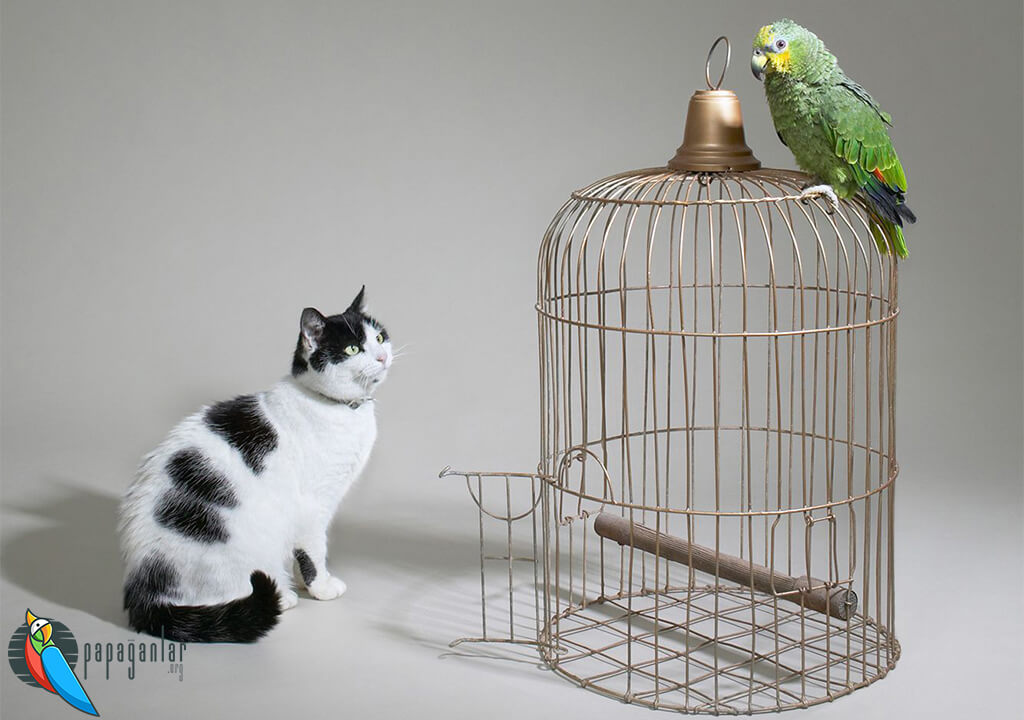 Do Cats and Parrots Live in the Same House?

Parrots, which are among the bird species, are quite remarkable with their colors and speech. Animal lovers may also want to add fun to their homes by buying a parrot. But do cats and parrots live in the same house? The cat and the parrot live in the house. However, it is necessary to take some difficulties and be careful and cautious.

Parrots and cats are both animals with strong imitation and understanding abilities. They are pretty easy to deal with. However, it is also observed that cats see it as bait and attack the parrot from time to time. It is important that you consider all the details to avoid this situation.

Otherwise, your cat may attack even if it is in the parrot’s cage. A parrot can die even if its cage is closed. Because the moment the cats attack, the parrots don’t make a sound and they die of fear. In order not to face bad results, you should be careful not to keep the cage of the cat and the parrot together when you are not in the room.